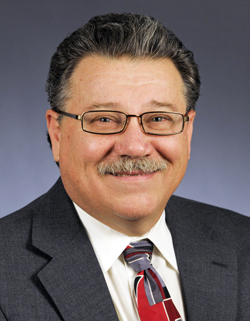 This is not just the retirement of a senior House DFLer, a past chair of the Higher Ed Committee and one of the most vocal voices of labor issues at the Capitol. Rukavina is a living bridge to a time, a place and a political tradition of one of the most distinct regions in the country: Minnesota’s Mesabi Iron Range. What ends this year is not just one man’s political career, but an era of Iron Range politics.

I wrote this in a post about his run for governor in 2010:

Rukavina’s strategy can be summarized quite simply: populism. Not just any populism, but rarefied, high-fructose, 80 proof cooked-up-from-a-homemade-still-back-in-the-woods populism. Having grown up around an Iron Range political universe in which the Napoleon-sized Rukavina casts the longest shadow, I can tell you that Rukavina is not acting when he talks about this driving the milk truck and sticking up for regular folks. His claims about constituent services are valid; he does an extraordinary job fixing glitches and opening doors for people who might lack political power or notoriety.

Along the same lines I remain in awe anytime I’ve been in public with Rukavina. Perhaps unsurprisingly everyone seems to recognize him, but he also seems to know most people he sees, too. Whether on his side or not, Rukavina retains the ability to spar, joke and converse with almost anyone. He knows people’s names. He knows their parents’ names. He knows their grandparents’ names. That, in a nutshell, is Iron Range politics and why, regardless of the 2010 outcome, here he will be regarded as a Range political legend.

To many in Minnesota, Rukavina is simply “a character,” the loudest voice in a cacophony of labor Democrats from up nort’ a’ Dulut’. They know him as the street fighter willing to take a liberal message and craft it into a homemade riot club, used liberally. But that’s a short sell. Just this session Rukavina ended up sparring with Rep. Pat Garafalo, a Farmington Republican.

This kind of debate is not unusual for Rukavina (or Garafolo), but the verbal exchange (especially at the 2:30 mark) shows you Rukavina’s style, a combination of brass knuckle punching and invoking three generations of your family history that he’s taken the time to learn about.

Known locally and to many at the Capitol simply as “Ruk” (That’s “Rooook,” not “rook” or “ruck”), Rukavina speaks with the distinct but ethnically ambiguous accent of the Iron Range baby boomer. Those boomers grew up in a post-war era of prosperity won by their parents and the unions that finally gained decent working conditions and wages after WWII. They were the product of an Iron Range society in which the traditions of many diverse ethnic groups merged through marriages and political coalition building. Rukavina’s trademark ability to remember everyone’s ethnic background while being able to work among diverse groups with ease could only have come from growing up at the time he did.

Rukavina served the entirety of his career in an Iron Range emerging from the big economic collapse of the early 1980s. Every year of his service represented a titanic battle to save some part of the Iron Range social compact from decline or political attack. Often he won. Often he lost. Today the Iron Range is less populous, less politically influential and more economically challenged than it was before. Critics might be quick to blame Rukavina for this, but one can only imagine how much worse off the area would be if the schools were less funded, the wages lower. Rukavina spent his career fighting for a good life for people like his kids, who are my age, and thus me, too.

A man of Shakespearean depth, he also bears Shakespearean flaws. He will often bully opponents, especially when circumstances aren’t going his way, and his lack of verbal discipline has gotten him in trouble. In classic Iron Range fashion, his loyalty to friends and family has also put him in situations where there are conflicts of interest. These flaws kept him from rising higher in politics or House leadership. But as I said before, knowing the back story helps. Rukavina rose to prominence in an Iron Range political structure where these flaws were marks of courage, winning votes rather than losing them. In another era, Rukavina likely would have been a governor, or a senator, akin to Huey Long or Floyd B. Olson. Instead, he becomes the most fitting example of a political and cultural tradition that built a nation but went through the wringer as the industrial age bowed to the information age.

I consider it an honor to have run the gamut with Rukavina — having been supported, encouraged, cursed and rebuked by him at various times, for various reasons. That’s really how it is for everyone who knows him. There’s a reason people tend to love or hate Tom. He does not mitigate passion and conviction. He does not modulate. He has navigated a 26-year legislative career expressing himself exactly as he is, for better or worse, consequences be damned. He believes with every ounce of his being in regular people and has endeavored to help them as best he can.

There will not be another like him. Not ever. With his well-earned retirement, those who come next may only hope to develop such earnest passion for the Iron Range and its people as Rukavina has demonstrated. Indeed, they must if we are to have any hope of a future here.

I doubt Rukavina is truly done with politics. But his retirement today should rightly be considered a turning point in the tumultuous and fascinating history of Iron Range politics.

I’ll leave you with an Uptake video of Rukavina’s 2010 convention speech from his bid for governor that year, one of his finest.