But a majority of them just don’t approve of Minneapolis. 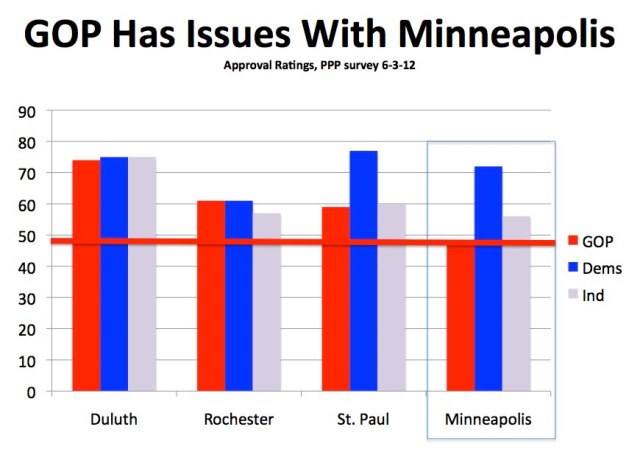 At first, I thought the obvious explanation is that Minneapolis is a DFL stronghold.  After all, Hennepin County gave Barack Obama 65% of the vote in 2008, and I could see how that wouldn’t go over well at the country club or Tea Party rally.

But that explanation doesn’t really hold up especially well, because Duluth’s St. Louis County and St. Paul’s Ramsey County are as about blue as Minneapolis’s Hennepin.  In fact, St. Louis and Ramsey gave Obama 67% in 2008, slightly more than Hennepin’s 65%.  Moreover, Republicans didn’t express strong preference for GOP-friendly Rochester (Olmstead: 52% for Obama in 2008) over the DFL strongholds of Duluth or St. Paul.

So I don’t get it.  Maybe it’s all of those descendants of Sweden, what with that nation’s despicable insistence on providing comprehensive access to education and health care to all its citizens.  What a cancer that would be if it spread to the Minnesota motherland.

I’d sure like to think that it’s not because Minneapolis was named the Gayest City in America by The Advocate, or that it has the largest Somali and Hmong population in the nation, and the second largest Vietnamese and Ethiopian populations in America.

On paper, it would seem like there might be a lot Republicans would love about the City of Lakes.  CNBC named Minneapolis one of its “Top Places for Business.” Forbes calls it one of the most innovative cities in America.  Many rankers have listed Minneapolis as one of the best places to find a job and make a living, or start a small business.

I honestly don’t know what it is.  But if you’re new to Minnesota and are planning a get together with a Republican friend, here’s a little tip:  DO NOT SUGGEST MINNEAPOLIS.