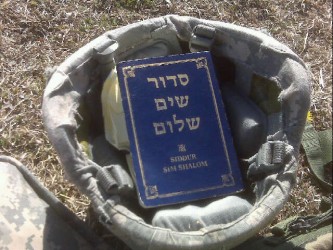 “I’ve never seen a Jew before.” He went up on his toes and craned his neck, his eyes searching my head.  His sweet Kansas City accent suddenly sour.

“Looking for something?”  My voice thick, I resisted the urge to clear my throat. I could hear blood pounding in my ears, my anger beginning to boil.   I knew damn well he was looking for horns.

He rocked back on his heels, embarrassment rising in his cheeks. “I uh, um . . .”  His voice trailed off as he looked away. I informed him he was an idiot for thinking that and didn’t speak to him for the rest of our training.

I was the only Jew in my guard unit back in NH and a few of the soldiers were fascinated with that. On drill weekends I would be peppered with questions about holidays, foods and traditions. Usually I was happy, or at least willing, to educate. One of the other Staff Sergeants occasionally would check in with me and make sure it was alright, that none of the questions were offending me. The right to religious observance/freedom is taken seriously in the military.  This doesn’t mean I get every holiday off, but rather that I am not discriminated against. The needs of the military will always come first.

Having someone look for horns on my head tho?  That’s a bit much.

The second day at Fort Sill’s reception battalion we were told to speak up if we needed any specific or unique religious accommodations. Kosher meals were mentioned so I spoke up. I was hoping to get a few kosher MRE’s.  At the next meal the Student First Sergeant (1SG) took my request (and me) up to the person in charge of the dining facility (D-Fac).  I had a hunch it wasn’t going to go well.

“What’s Kosher?”  I didn’t want to get into it, I had no expectations of getting a hot kosher meal at the D-Fac.  The Student 1SG asked me to explain.  I did.  “Well, you don’t have to take the bacon, we have sausage.”  She was confused by my explanations but still trying to help.  I shook my head, thanked her and went back to my iceberg salad meal plan.

At Charlie Company where we would start our Warrior Transition Training, we sat on the painted concrete floor around our First Sergeant as he gave us the low down for the next 9 weeks and took questions.  He went over the religious services schedule and I raised my hand, asking about Jewish services.  He didn’t know, but thought they were on Friday night.  He told me he would do his best to accommodate me and promised I would be allowed holiday observance for Purim.

I was fortunate and able to make nearly all Friday services during the 9 week course.  It wasn’t uncommon for there to only be 2 other soldiers in attendance, 1 Jewish and 1 battle buddy. When I was there in ’09 services were run by a very nice Chaplain.  He introduced  himself to me as a “Torah Observant Christian” from Alabama.  The closest translation of which I can come up with is Messianic Jew.   He and his family lit candles Friday night, his son wore a kippah, they had mezuzahs up on their door posts and were all completely and devoutly in love with Jesus.  Those Friday night services were bizarre.

A week into training I admitted to one of my curious drill instructors (DI) why I was only eating salads and cereal.  He kindly suggested I have someone mail me sustenance and issued me a “kosher food profile.” (which equates to a permission slip for non D-Fac food).  Boyfriend (now Husband) took to mailing me weekly packages stocked with Powerbars, Clif Kids Fruit Ropes, Sunflower seeds, anything nonperishable bearing a hechsher.

For my birthday Uncle Sam issued me an M-16 and Boyfriend sent me a Tiffany’s necklace.  This gift was met with the quasi-question, “So it’s true. All Jews are rich?”

One of my bunkmates assumed Boyfriend was a Rabbi when she heard me saying the Modeh on the phone with him every morning.

Another female was even brazen enough to ask about the hole in the sheet.  I was disappointed that of all things to know about Jews that was her factoid.  She was disappointed to learn that it is in fact a myth.

I was able to help educate my not so kind DI’s about the word “kike”. I believed him when he said he didn’t know what it meant.  I also believe you shouldn’t say things you don’t know the meaning of. The 1SG was happy to help me file an EO complaint and I’m sure that my DI was shipped off to get some sensitivity training.  A hiccup in his career.

With close to 3 million soldiers in US Army and less than 5,000 of them Jewish I’m not surprised to find ignorance and questions.   It gets old and tiresome but it’s also a little bit fun. I like explaining that “no, a Rabbi didn’t bless my food.”

Of course there are days I would prefer to blend in and not have the fancy kosher MRE meal that stands out like a sore thumb, or to not be the one heading out to chow early on Friday so I can make services, but as long as the Army is willing to work with me, I will be continue to answer questions, dispel stereotypes and proudly represent The Tribe in my Army Combat Uniform.

Educating: someone’s gotta do it. On being a Jew in the armed forces