The news media loves state rankings and report cards.  A constant array of news stories continually lets states know how well they’re keeping up the with the Jones’s in their national neighborhood.

This coverage often leads to the vigorous debates between political activists and leaders about which ratings matter most?  Many conservatives prefer measures such as “best business climate,” “most free,” “most religious,” and “lowest taxes.”  Many liberals covet measures such as “healthiest,” “best educated,” “best quality of life,” or “best child wellness.”

Who is right?  Nobody and everybody, of course.  It depends on what each individual values most in life.

That’s why the ultimate state ranking is Gallup’s Life Evaluation Index, which measures the proportion of a state’s citizens that self-report that they are “thriving.” I like this measure, because it focuses on happiness bottom lines, not the variables that research designers speculate are the ingredients for happiness.

Rankings researchers do the best they can, but the ingredients of happiness are inherently subjective.  After all, if someone living in abject poverty in a hellscape with no services or amenities feels happier than someone living in the lap of luxury in a Valhalla of a community, who am I to argue with them?   Happiness is in the eye of the beholder.

So, how is Minnesota doing on this bottom line “life evaluation” rating?   Remember, Minnesota is a state that is near the top of ratings when it comes to things like “health,” “wealth,” “well-being,” “quality-of-life,” and “education achievement.”  Those things make human beings “thrive,” right?

Maybe not.   Despite those findings, it turns out Minnesotans are not really happier than other states’ residents.  Minnesota is only 22nd among the 50 states on the thrive scale, while neighboring North Dakota is much happier at 5th.  Insert snotty North Dakota joke here.

It could be worse, though. Minnesota is thriveier than neighboring Wisconsin (40th), proof that the Lombardy trophy and beer for breakfast are not the key to happiness after all.

What’s up with that, Minnesota?   Does Minnesota’s climate and Vitamin D-deprived winters account for our chilly moods?  With bright and balmy Hawaii and dark and cold Alaska the top two happiest states, that theory doesn’t hold up.  And again, two words:  North.  Dakota.

Are conservative low tax, low services states happier than liberal high tax, high services states like Minnesota?  That hypothesis doesn’t work either.  The top 5 happiest states include two bright blue states, Hawaii and Maryland, and three bright red states, Alaska, Wyoming and North Dakota.  Moreover, there are low-tax, low-service red states among the least happy states, such as Arkansas and neighboring South Dakota.  There is no consistent correlation here either. 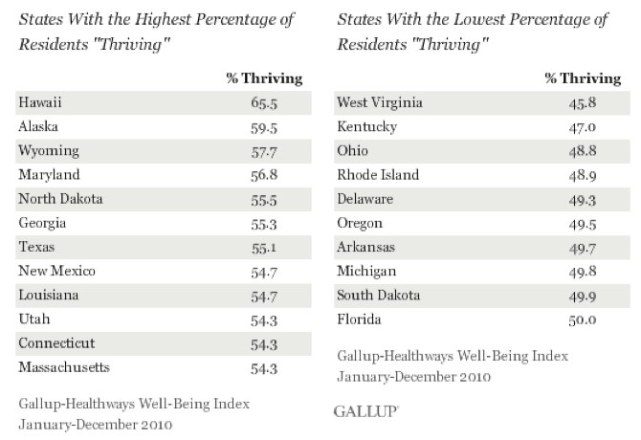 Minneapolitan Dan Buettner has written an interesting book called Thrive, published by the National Geographic Society, in which he visits what researchers say are the happiest communities on the planet.  It’s a thought-provoking read, but Buettner’s concluding “keys to happiness” don’t always dovetail with the state life evaluation rankings.

For instance, Buettner writes that Denmark, with it’s strong social safety net and relatively high taxes, is a happy place because “If you are in an area or society of social and economic equality rather than large disparity of “have’s and have not’s” you’ll be happier.”

As a liberal, that makes sense to me.  But when you look at the life evaluation rankings, you find that five of the top dozen happiest states are actually in the bottom ten for high income equality – Georgia, Texas, Louisiana, Connecticut and Massachusetts.  This is contrary to what the Buettner theory would predict.  At the same time, five states — Hawaii, Alaska, Wyoming, North Dakota and Utah — support Buettner’s theory.  That is, these states have relatively low income inequality and are among the happiest states.  Again, no consistent trend.

My major conclusions from all of this are: 1) happiness is not a simple or linear phenomenon to predict across states and 2) Minnesota, with its vaunted “quality of life” — third in the recently released “Well-Being Index!” — is a much less jolly place than many of us like to think.