When digital photographic technology was first introduced it threw the industry for something of a loop. Some camera manufacturers folded, all but three film manufacturers went out of business, and everyone else was pretty much flummoxed. For over a century cameras had been designed to accommodate film of some kind so when film was no longer required it appeared to open all kinds of new possibilities for camera design.

I’m a photographer by trade so I get e-mails about new equipment and software all the time. A recent e-mail from B&H photo introduced Canon’s new 40mm “Pancake” lens. I’ll explain what a pancake lens is later but the fact that Canon is making one exposes an interesting fact about photography. Despite the fact that technology has obviously changed dramatically in the last 20 years, the digital format has not improved camera designs. I work with cameras and think about photography all the time so this realization actually surprised me. For some reason until I saw the new pancake lens the drift back towards old camera designs had escaped my attention, trees in the forest kinda thing maybe.

The history of photography is in many ways the history of portability. Photography is a technology dependent art form; you can’t do it without a camera. In the mid 1800’s guys like Matthew Brady took cameras into the field. These were view cameras, the kind with a lens on the end of an accordion. The photographer had to stick his or her head under a big cloth in order to see what they were photographing (the image by the way was upside down). These were portable in the sense that if you had a big wagon you could move the camera, the dark room, and all your chemistry and glass around. By the way that chemistry was nasty, photography of that period was actually very dangerous to one’s health.

In the 1880s roll film was invented and completely changed the way photography was done. Roll film also made photography possible for millions of people. Until that time a photographer had to use glass plates coated with emulsion chemicals. The photographer usually made their own plate by mixing the chemistry and coating the glass with it.

Roll film (film wrapped on spool or roll) was purchased pre-made in a store, and dropped off at a lab for processing and prints. This new type of film dramatically changed camera design, cameras actually became small and portable. The best example was the Kodak Brownie, basically a 6X6X6 box with a lens and a shutter button. Brownies made cameras portable, but there were photo quality issues, and although the Brownie could be carried, people wanted something more practical. This is when the era of fold out accordion “pocket” cameras was inaugurated. 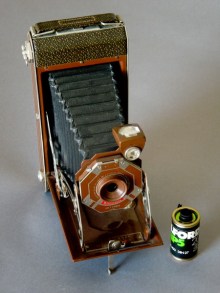 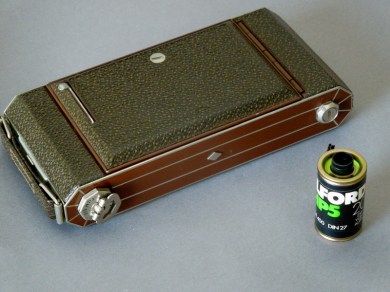 The Kodak “No  1” pictured above was ultimate design in fold-out  “pocket” cameras. They called them pocket cameras but that was wishful thinking, few people had pockets big enough holster one of these babies. Could they have made them smaller? Sure they could, but most labs of the era did not use enlargers to make prints. Remember those big cameras I was talking about back during the civil war? Well one reason they were so big was that the prints were all contact prints, you just laid the negative on the photo paper and exposed it, if you wanted a big print, you needed a big negative.  If you’ve ever wondered why old prints from that period are so many different shapes and sizes, now you know; the size of the negative determined the size of the print and there were a lot of different size negatives.  The Kodak picture here produced a 2 ¼ x 4 ¼ print. 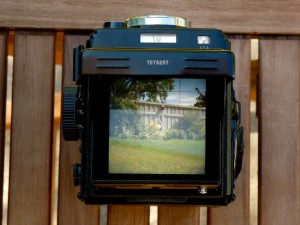 The folding “pocket” cameras between the 1880’s and the 1940’s were “snapshot” cameras designed to bring roll film cameras to the general public, but the Brownies and pocket cameras didn’t produce great photo quality. Other attempts to make roll film cameras compact and portable produced the twin lens reflex camera like this Yashica.  This has one lens for focusing, and another that exposes the film.  These cameras were designed for professionals and people who were looking for really good photo quality, and the 2 ¼ x 2 ¼ negative could be printed as a contact print or with an enlarger.  You can see how “compact” a TLR is.

In 1935 Kodak introduced the 135, or 35mm cartridge film. This radically changed the possibilities for camera design and brought enlargers into wide spread use, a contact print of a 35mm negative is pretty much useless. 35mm film really makes compact camera design possible, and as the film technology improved it eventually rivaled medium format roll film cameras.  You still couldn’t put these babies in your pocket but you could carry a serious camera around and take good photos.

In the early years 35mm film produced some interesting designs such as this Exacta that combines the viewer of a TLR with the compact design of 35mm.

The drive for compact camera designs produced some creative approaches. Olympus produced these ½ frame 35mm cameras. They basically cut the 35mm negative in half, you could get 48 shots off of a 24 exposure roll! These cameras were very nearly as compact as modern digital point and shoots, but there were image quality issues. 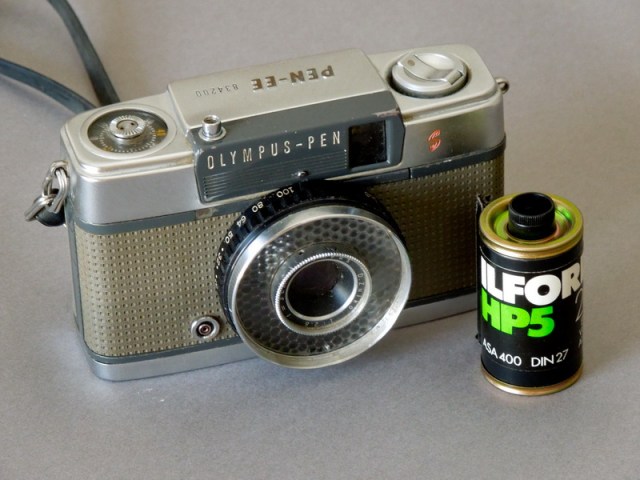 ½ frame cameras not withstanding there were size limits with 35mm film, you could only go so small with camera design. This led to different films like the 126 and 110 cartridge film cameras.  The problem with 110 and 126 films however was image quality. Designers kind of landed back in the era of the Brownie with portable cameras that produced photos, but didn’t satisfy image quality expectations.  Some manufacturers tried to address this problem by producing really high quality 110 format cameras. The best example of this was the Pentax 110 SLR with interchangeable lenses.  It had an auto winder, and a flash.  The advantage of these cameras was their compact nature, but it came at the cost of photo quality. You got the best print possible from this Pentax, but a decent 8×10 print was an overly optimistic dream in most cases. 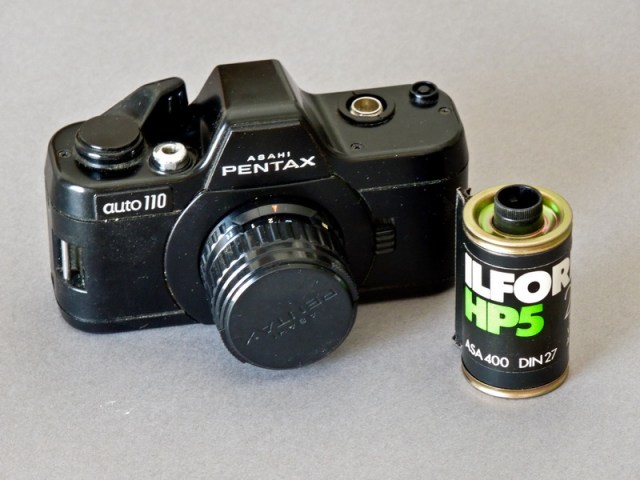 The frustrating thing about the rangefinder compact cameras was the limitations regarding lenses. Few of them had interchangeable lenses so you were pretty much stuck with whatever the manufacturer put on them. The response to this complaint was the Single Lens Reflex or SLR like the Pentax below. Now photographers can get into technical arguments about the pros and cons regarding rangefinders and SLRs, but for a variety of reasons the SLR emerged as the camera of choice for serious photographers who wanted portability and were willing to sacrifice a certain amount of compactness for image quality.

Pentax had reputation for producing some of the more compact SLRs. Pentax’s flagship camera was the K100, you can see here that is a little more compact than the Canon FTB that was its counterpart of the era.

Nevertheless, SLR camera manufacturers tried to address the demand for more compact cameras and this is where the pancake lens comes in. 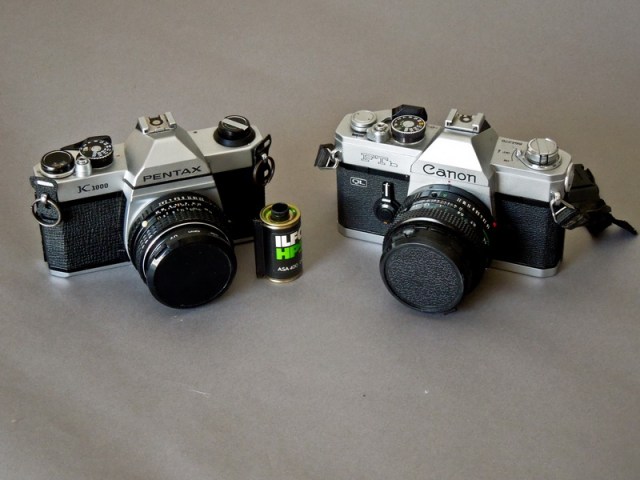 The desire to produce a low profile SLR led Pentax to develop the 40mm or 45mm compact or “pancake” lenses (the smaller lens of the two). You can see it’s about half the size of a 50mm. The lens was designed for taking family photos and all around photos. In theory this lens was all you needed to take photos of family at parties, on vacation, and around the house. Its compact nature cut the profile of the SLR and made it more practical to carry around.

Canon’s reintroduction of a pancake lens brings me back to my original observation.

Typically in the history of camera design, a new medium or film produces radical changes in camera design. This isn’t happening with digital photography. In fact after a decade of failed design attempts it looks like the old designs are being brought back. Every camera manufacturer except Kodak now makes a DSLR (digital SLR). In the beginning many manufacturers assumed SLRs would die as consumers switched to more compact models. Many manufacturers didn’t even bother to build DSLRs. It was assumed that advances in zoom and lens technology would finally satisfy the consumer demand for compact cameras with decent image quality but that didn’t happen. It turns out people want decent cameras and are will to put up the size of DSLRs.

The rangefinders are also making a comeback. The Fuji X10 (amongst many others) brings the finder window back, from the front this looks like a 60s era rangefinder. 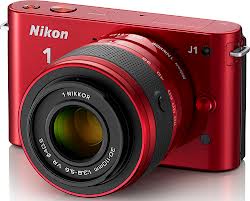 Nikon is bringing back the interchangeable lens rangefinder design with the Nikon 1, and even that may be supplanted by the a model with a viewfinder.

Digital Cameras have obviously been a huge jump in technology and features but for the first time in the history of photography they have not led to a radical redesign of cameras themselves. Could it be that these basic designs just can’t be improved upon?

Note: All of the photos with grey background were photographed with this Nikon Coolpix S8200. If you look more closely than you should you can detect some motion blur but all in all, not bad. The other photos are courtesy of the manufacturers.

History is back: In search of the perfect camera design