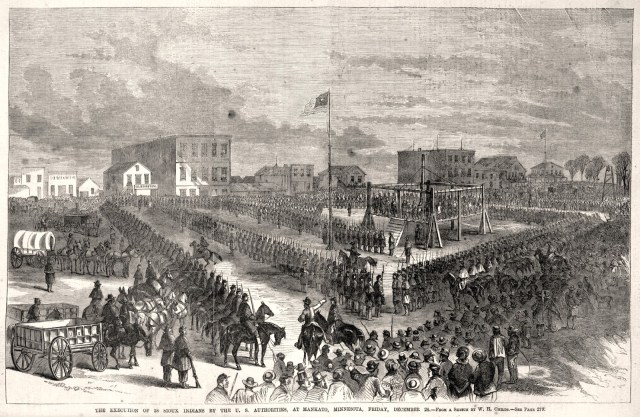 Last weekend's episode of "This American Life" was entirely dedicated to Minnesota history. Holy cow, just let those words sink in. Monday's podcast release made for a big day around here.

The story, "Little War on the Prairie," surrounds a Mankato native and public radio reporter John Biewen, now working at Duke University in North Carolina. He returns home to explore the story of the U.S./Dakota War of 1862. He wonders why, growing up in Mankato, he never knew anything about one of the bloodiest confrontations between the whites and Indians in U.S. history, especially since so many key events took place in his back yard.

The story is fascinating, tragic and revelatory. I highly recommend you listen to this podcast, in the embedded player below or here at the TAL website. You really should subscribe to This American Life's podcast at iTunes, anyway. There's no good excuse not to; it's the finest program on the air.

The story reminds me of my experiences last spring writing a script for the Bemidji edition of the Great Northern Radio Show. I knew that the Ojibwe had reservations in northern Minnesota and I knew that they were here first. I had no idea the extent to which they were robbed of land. Among the greatest political leaders in Minnesota history were the Ojibwe chiefs Hole-in-the-Day and his son of the same name, who was assassinated on the Leech Lake reservation, not terribly far from where I live. 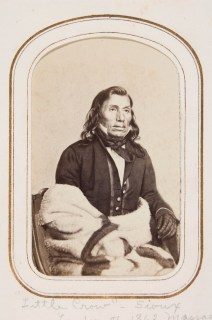 Courtesy of the Minnesota Historical Society
Chief Little Crow spoke against the uprising, knew it
would fail but led the effort anyway
when his people demanded war after years
of injustices from the U.S. government.
He would be shot months after the war.

How could I age into my 30s, as a student of history mind you, before learning these stories? I wrote last May about Anton Treuer's fantastic book "Everything You Wanted to Know About Indians (But Were Afraid to Ask)" and also recommend his "The Assassination of Hole-in-the-Day." Treuer's writing on his Ojibwe people's history holds parallels to some of the Dakota history shared in Biewen's This American Life story.

Whether speaking of the Ojibwe or the Dakota peoples, major chapters of Minnesota history are missing or misrepresented in the history books. This needs to be acknowledged and changed.

And as I gear up for finally getting to see "Lincoln" this weekend, I have the new perspective that President Lincoln signed the death warrants for 38 Dakota warriors even though he likely understood that their trials were shams. He did so for political convenience, at the request of state leaders who had delivered Minnesota's first electoral votes to the greatest, but greatly complicated, president of our nation.

Biewen's conclusions about the way Minnesotans handle their history was also eye-opening. Listen yourself for his full description, but we Minnesotans have a strong passive-aggressive, avoidance-based method of approaching life, and history in particular. We forget our past, as instinct, to avoid the emotions of regret or the specter of change. This is certainly true of the Native experience in Minnesota, but true of so much else as well, including the rough and still barely-understood story of the Iron Range.

Courtesy of the Minnesota Historical Society
This Dakota internment camp at Fort Snelling barely shows conditions for the Dakota during and after the war. Most Dakota opposed the war, but all were punished and many hundreds were killed, either directly or as a result of camp conditions and the forced expulsion from Minnesota.