We’ve talked about this on more than one occasion, but the data shows that many conservative/Republican talking points on tax policy just don’t reflect reality.  Let’s look at some (relatively) new data on this subject that continues the trend.

A recent study by the Congressional Research Service (CRS) looked at the effects of the top marginal individual income on various measure of economic growth.  As the study itself concluded:

The results of the analysis suggest that changes over the past 65 years in the top marginal tax rate and the top capital gains tax rate do not appear correlated with economic growth. The reduction in the top tax rates appears to be uncorrelated with saving, investment, and productivity growth. The top tax rates appear to have little or no relation to the size of the economic pie.

However, the top tax rate reductions appear to be associated with the increasing concentration of income at the top of the income distribution. As measured by IRS data, the share of income accruing to the top 0.1% of U.S. families increased from 4.2% in 1945 to 12.3% by 2007 before falling to 9.2% due to the 2007-2009 recession. At the same time, the average tax rate paid by the top 0.1% fell from over 50% in 1945 to about 25% in 2009. Tax policy could have a relation to how the economic pie is sliced—lower top tax rates may be associated with greater income disparities.

Here are two graphs from the study that give a little more color on that conclusion. 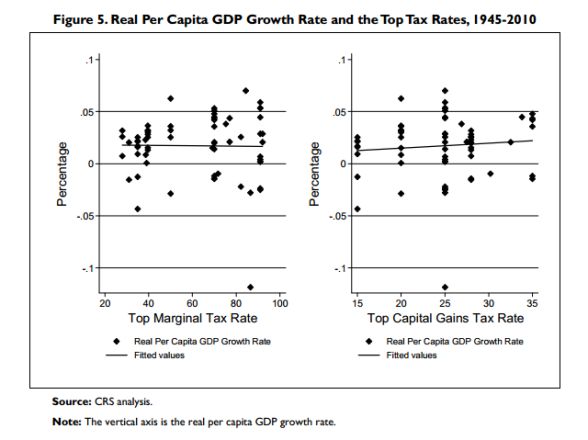 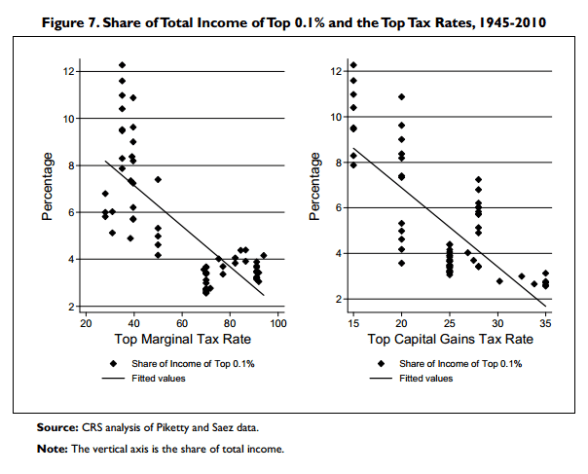 This graph shows how the lower top marginal tax rates work to change the distribution of income — favoring the most wealthy in society.  Each graph shows that lower tax rates result in higher concentrations of income at the top of the income scale.

What happened when the CRS tried to release this study?  Senate Republicans had it killed.  After all, if their narrative is found to be untrue, it pretty much undercuts their entire reason for existence at this point.

Well, that, and the unending Republican desire for cutting taxes on corporations. Well, a Congressional Budget Office study from earlier in the year shed some light on that situation.  In 2011, corporate taxes as a percentage of profits hit a 40-year low. 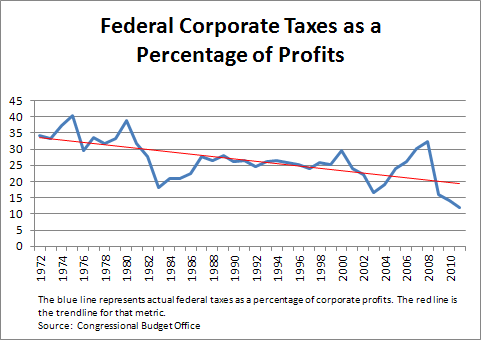 Some of this drop in recent years can be attributed to temporary measures (such as a change in depreciation rules) that were part of the stimulus package, but overall, the tax environment for business has been getting more friendly over recent decades — not less.

Republicans and Democrats should work together to find solutions that will make our tax code simpler and fairer — and I believe there are significant areas of agreement to be found there.  But if we’re going to have solutions that really work for all Americans, we need to start with a real understanding of the facts and not persist with myths, talking points, and empty rhetoric.