Minnesota Revenue Commissioner Myron Frans made the rounds at the State Capitol today, appearing before both the Senate and House Tax Committees.  Frans got a decidedly chilly reception from Republicans on the respective committees, including our own State Senator Julianne Ortman (who went to so far as to call elements of the plan “a re-election ploy” — a rich assertion coming from a party that hasn’t hesitated to try their own ploys).

Meanwhile, other Republicans are already sounding the alarm about how Dayton’s plan would send businesses running for the borders because our tax system will be so out of whack.

Let’s take a deep breath here and look at some numbers.  A couple of years back, I looked at a study by the Council on State Taxation ( a consortium of 600 businesses) regarding state and local tax rates.  What we found in that Minnesota had lower taxes as a percentage of economic activity than the national average and many states in the region.  Maybe it’s time we look at how the numbers have changed over the last two years.  Here’s a link to the new study.

Well, not much has changed in two years.  Minnesota continues to be below the national average, and slightly ahead of neighboring states like South Dakota and Wisconsin.  And while Minnesota’s tax percentage has increased from 4.3% to 4.5% in that time, that rate of growth is slower than the national average (which increased by 0.5%).  What happens if Dayton gets his entire tax proposal?  Minnesota goes from 4.5% to 4.7%, which does slide it slightly behind Wisconsin and South Dakota. 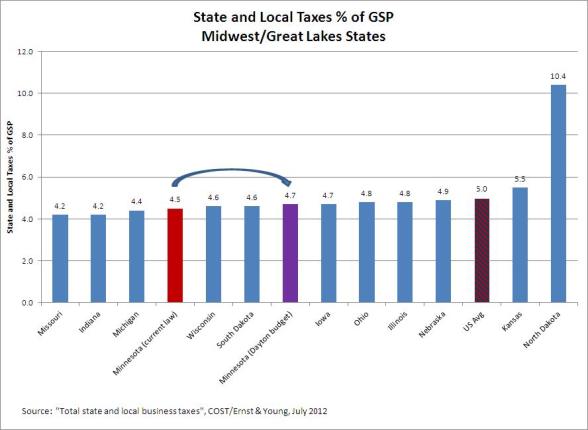 Is this enough to drive thousands of jobs away?

Seems unlikely, since our position slightly ahead of these states previously didn’t encourage large migration of jobs into the state — and the state out of all those on the chart experiencing the highest job rate increase is North Dakota, which also has the highest percentage of taxes as a percentage of gross state product.  The reality is that tax policy is one of many factors that drive economic growth and business investment.

There are plenty of reasons to like or dislike specific elements of the Dayton tax plan.  I’ve been clear about things that I do and don’t like.  The job of a minority party isn’t just to grandstand and say no.  They should be working to make the plan better where they can — certainly DFLers aren’t entirely united behind the plan and some would be glad to grab on to some reasonable alternatives.  Instead of biting Commissioner Frans’s head off, they should be offering their own suggestions.

Will they do so?  Sadly, I’m not optimistic.  The incentives in our political system today seem to favor confrontation over cooperation, and power-grabbing over problem-solving.