One common argument in support of e-pulltabs is that a portion of the money goes to support charities. While that’s true, the efficiency of some of the more popular e-pulltabs charities is pretty pathetic.

The top charity based on e-pulltabs venue partners is Community Charities of Minnesota (they don’t appear to have a website) with 13 e-pulltab bar partnerships to date (PDF). Here’s a look at their financials for the past year: 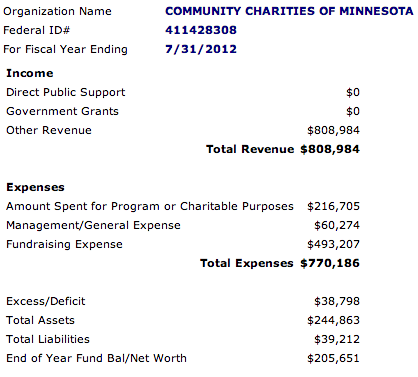 As I read that, this particular charity takes in 4 dollars for every one that ends up going to their charitable cause. $800k turns into $200k. This seems very inefficient to me.

If you do not have a charity in your bar or restaurant, we’d be glad to help you find one or get the MLBA Children’s Fund charity (a 501c3 charitable organization, with pulltab sites all across the state.)

Here’s a look at their numbers: 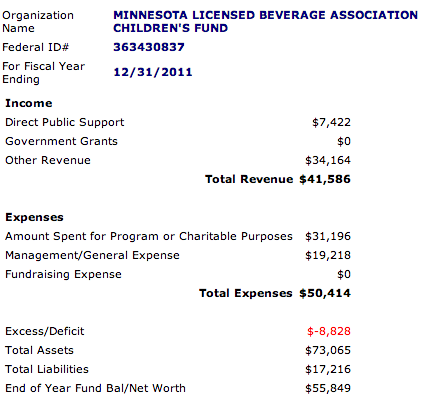 To give those numbers some perspective, here’s a look at how Charity Navigator ranks charities based on their administrative expenses:

Both of the charities above appear to be fundraising charities, meaning they collect money only to donate it, so their overhead costs should be very low. As I understand this ranking system, both of these charities would receive a zero score from Charity Navigator for having administrative expenses greater than 25% of what ends up going to their charitable cause.

The MLBA Children’s Fund appears to kick a portion of what’s left for charitable purposes to the Friends of The St Paul Public Libraries, which seems like a worthy cause. But, wouldn’t the St Paul Public Libraries be better off if they were the direct recipient of the funds rather than getting a portion of what’s left after the MLBA Children’s Fund plays the role middleman?

A non-profit wing for your sales team?

Another thing that’s interesting about this arrangement is that the non-profit MLBA Children’s Fund executive, Colin Minehart, appears to be an active salesperson on behalf of the Minnesota Vikings, gambling vendors, and bars. Jean Hopfensperger profiled Minehart last fall after e-pulltabs went live:

It’s been a wild two weeks for Colin Minehart, one of Minnesota’s most ambitious promoters of electronic pulltab games. Fifteen hours a day, he’s on the phone, on the road, cajoling bars and restaurants to install the new games that are supposed to fund the Vikings stadium.

Minehart is the gambling manager for the Minnesota Licensed Beverage Association, an organization that has emerged as a key driver since the games were rolled out Sept. 18. Three of the five bars that launched the gambling tablets are tied to the MLBA’s small charity. Another four signed on last week. Dozens more are expected down the road.

“I just signed up Tom & Jerry’s in Chisholm,” said Minehart, leaving the Iron Range bar co-owned by former Minnesota Sen. Jerry Janezich. “Now I’m on my way to Wright. I’m getting ready to go to Long Prairie, Sanborn, then back to Milaca. … I’m averaging 1,000 miles a week.”

So, a guy who’s the head of a non-profit is driving 1,000 miles/week to sell e-pulltabs, where the majority of the net profits go to private businesses. Quite a deal for the Vikings, e-pulltabs vendors, and bars, eh? Perhaps this helps explain why the MLBA Children’s Fund’s administrative costs are so high? 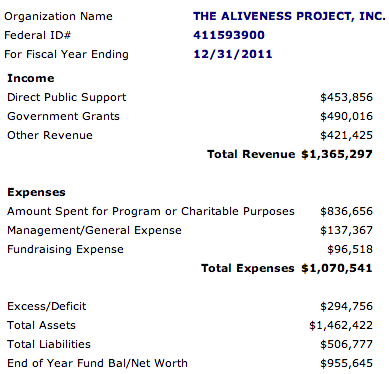 They look better than the MLBA Children’s fund and Community Charities of Minnesota to me. And, they are doing far more than cashing and writing checks, including running housing, a food shelf, and counseling services for people suffering from HIV/AIDS in the Twin Cities.

My point is, if you’re going to exploit gamblers while claiming it’s for charity, at least have the decency to pick a quality charity to partner with.

Perhaps the Gambling Control Board could set some standards on charitable performance requirements for e-pulltabs partnerships? Give gamblers some confidence that at least a portion of their losses really do support a good cause.