I LOVE BERNADETTE THOOFT’S infectious laugh and outgoing personality. And I love what this mother of seven is doing for my hometown.

Photo by Audrey Kletscher Helbling
The Store: Thrift and More sits just off Minnesota Highway 19 in Vesta in Redwood County.

In February she opened The Store: Thrift and More in Vesta, population 330 and the only town along the 40-mile stretch of Minnesota Highway 19 between Redwood Falls and Marshall. 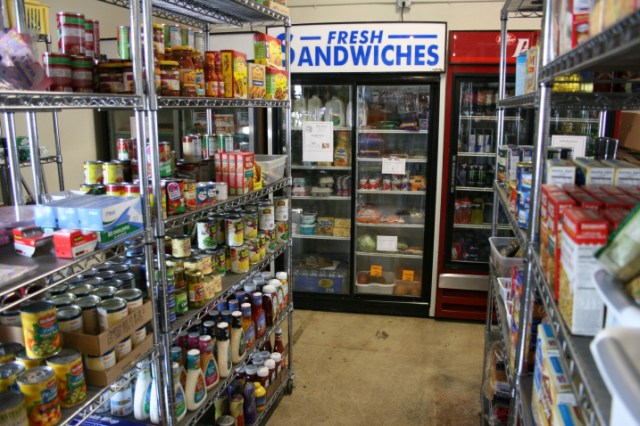 I don’t know exactly how long my hometown has been without a grocery store. But it’s been awhile. Locals, like my 80-year-old mom, have had to drive 20 miles either east or west to find the nearest grocery store. Now this community’s residents, many of them elderly, need only walk or drive to the west edge of town to buy a loaf of bread, a gallon of milk, organic eggs from Bernadette and Matt Thooft’s farm, fruit and an assortment of processed foods that include SPAM, much to my mom’s delight.

This is huge, to have groceries and basic necessities available in Vesta. Bernadette even offered to have her 11-year-old son deliver right to my mom’s doorstep a block away. Such small-town neighborliness simply warms my heart. Many times the good people of Vesta have assisted my mother. And for that, I am grateful. 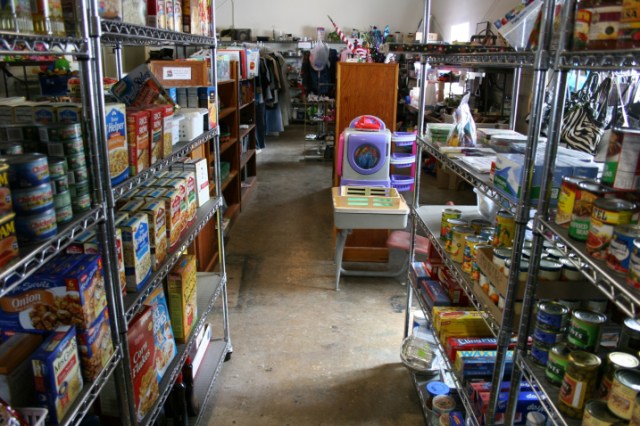 Photo by Audrey Kletscher Helbling
Looking from the front grocery section toward the back thrift area of The Store.

Bernadette tells me she originally hadn’t planned on stocking groceries, rather dedicating her floor space to thrift items that range from kitchenware to toys, books to clothing, gift items to home décor and an assortment of other merchandise. 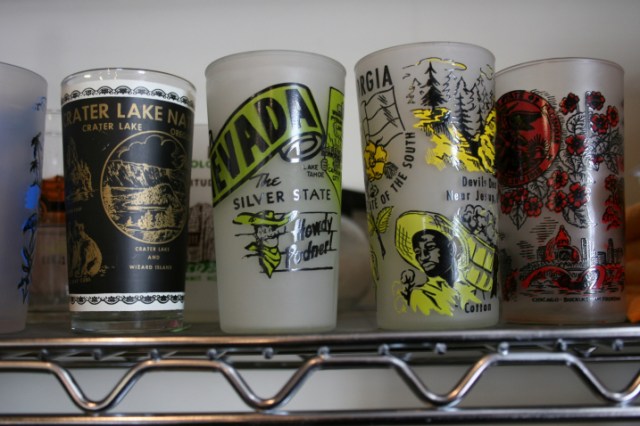 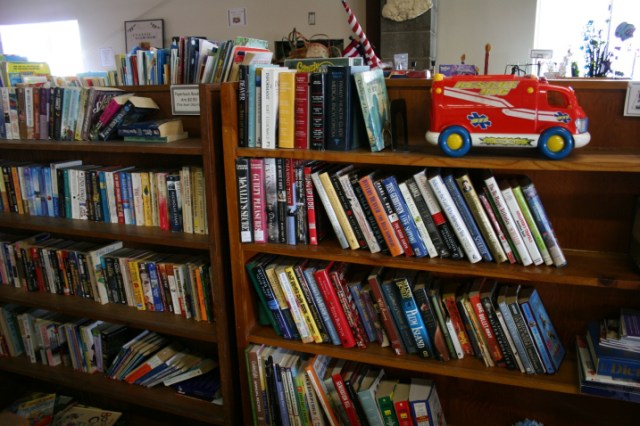 Photo by Audrey Kletscher Helbling
Bernadette offers a great selection of used books for all ages. 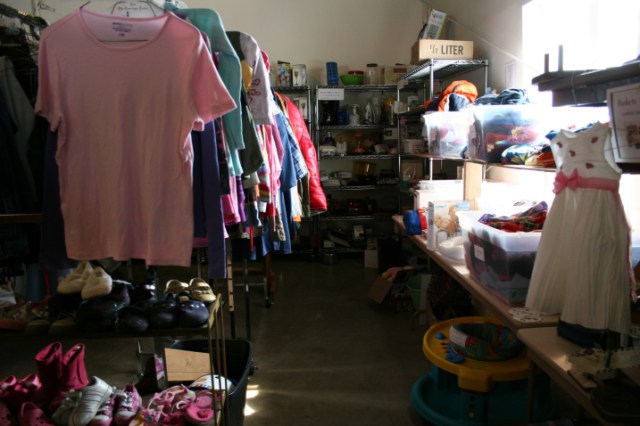 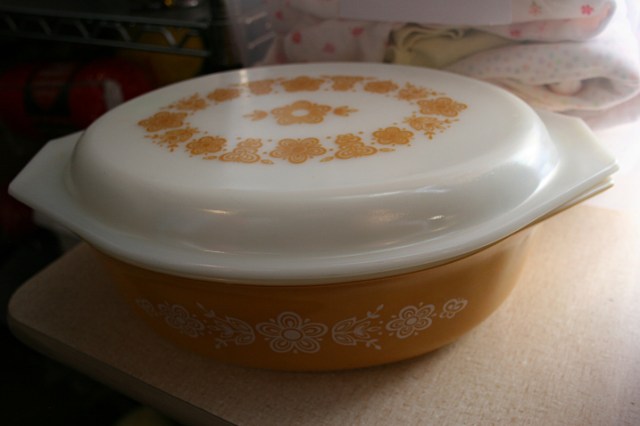 Photo by Audrey Kletscher Helbling
One of my favorite finds in The Store, an $8 vintage Pyrex casserole, which I nearly purchased.

But then she started getting requests to carry groceries. So Bernadette decided to buy food and products her family can use. That way, if items don’t sell, she doesn’t lose anything. Once a week this entrepreneur mother drives the 20 miles west to Hy-Vee Foods in Marshall, reselling her purchases in Vesta at a slightly marked up price that will help cover gas expenses. 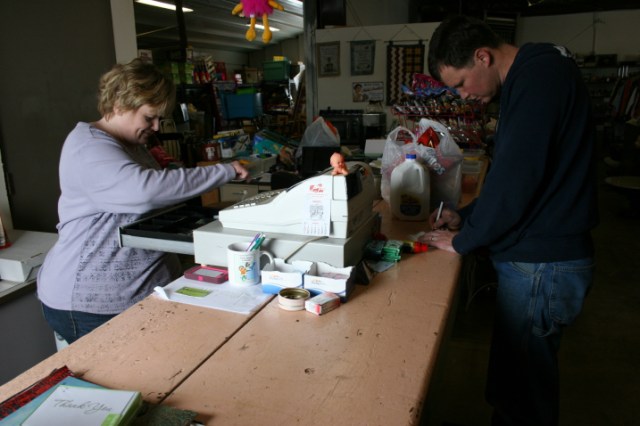 Already several local families come to The Store once a week to purchase their groceries, she says. On the Saturday afternoon I visited, Jason Kramer popped in from his home across the street to pick up Oreos, chips, bread and milk. He calls opening of The Store “flippin’ awesome.”

It is that type of enthusiasm Bernadette hopes for from other Vesta area residents. She needs their support, and business off the highway, to make her venture work in this isolated prairie town. 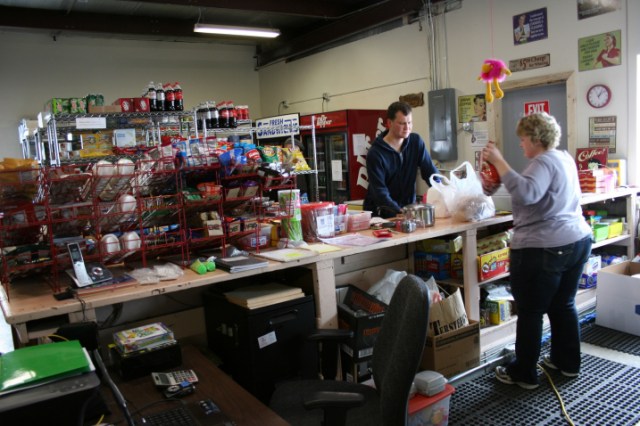 Photo by Audrey Kletscher Helbling
Just another view of the store and Bernadette’s office with Bernadette bagging Jason’s purchases.

In the short time I perused the store and spoke with Bernadette, several others stopped in—two middle schoolers to eye the toy collection and eventually purchase candy, a middle-aged couple scanning thrift items and then Jason for his groceries. I walked out with a kettle for my college-aged son and my husband grabbed packaging tape and a dispenser. 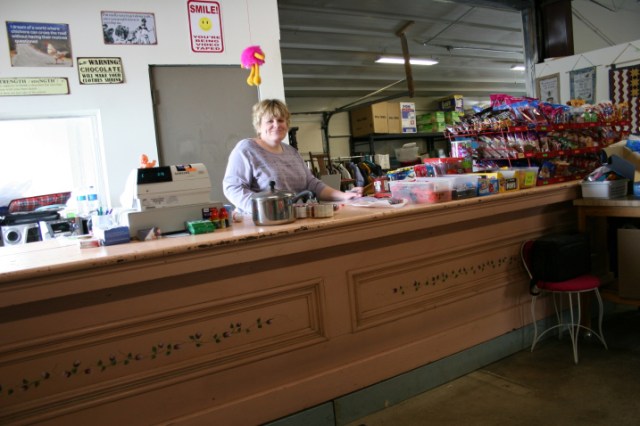 Photo by Audrey Kletscher Helbling
This 1800s general store counter anchors The Store. Those are our purchases on the counter, that kettle and tape.

Bernadette says she’s aiming to recreate a Mom and Pop general store with a little bit of everything. I was delighted to find candy lining the 1800s checkout counter, reminding me of the penny candy I bought at Rasmussen’s Grocery while growing up in Vesta. The vintage counter, purchased from a Lake Benton antique store, originated from a general store between Lake Benton and Brookings, South Dakota. It’s the perfect fit for The Store, lending that historic authenticity reminiscent of yesteryear. 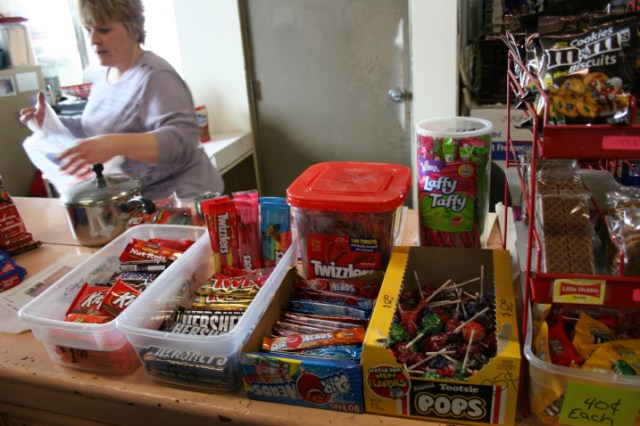 Photo by Audrey Kletscher Helbling
Like the old-fashioned general store, Bernadette has set up a candy display, including my favorite Tootsie Pops.

I can remember when Vesta boasted two hardware stores, several restaurants/bars and a grocery store along with other businesses, in its one-block Main Street.

Rarely does a new business open here. But Bernadette, who lives on a farm near Lucan seven miles to the south, was looking to locate along the highway, conveniently next door to her husband’s business, Matt’s Frame Repair. 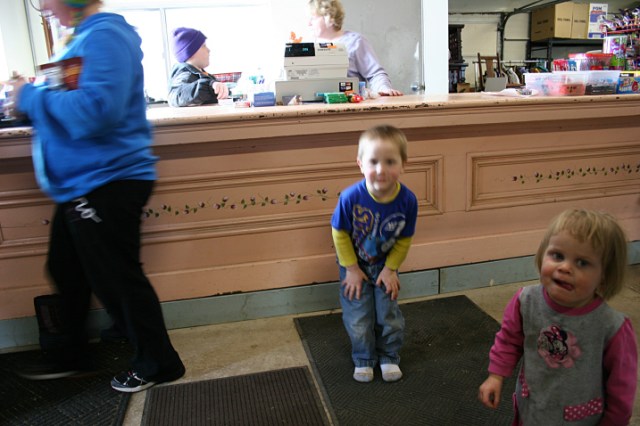 Photo by Audrey Kletscher Helbling
A young customer exits The Store, left, while three of the Thooft kids, including Maxwell, 4, and Beatrice, 21 months, hang out with Mom. The Thooft’s children include an 11-year-old, two 7-year-olds, two 4-year-olds, a 3-year-old and a 21-month-old.

She likes that Matt can walk over for lunch and spend time with her and the kids, ranging in age from 21 months to 11 years. She affectionately calls her seven, five of them birth children, two adopted, “the hoodlums.” The kids hang out in a room built into a corner of the poleshed style building. 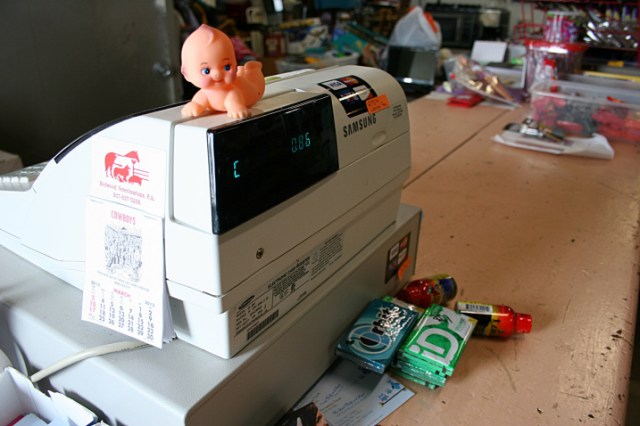 Photo by Audrey Kletscher Helbling
Look around and you’ll see Bernadette’s sense of humor in signage and props like this doll perched upon the cash register.

While the kids play and Matt naps in that corner playroom, Bernadette tends to customers on this Saturday afternoon in March. Her laptop sits open on her desk, her reference source for the thrift merchandise purchased primarily from online auctions and also from garage sales. 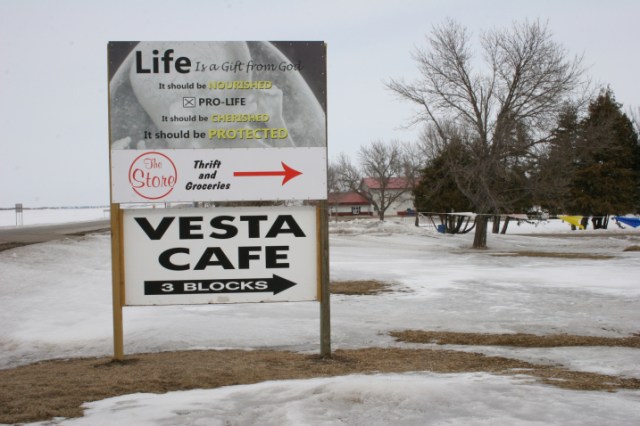 Photo by Audrey Kletscher Helbling
This sign by the thrift store points travelers along Minnesota Highway 19, left, to The Store and the Vesta Cafe.

Bernadette is donating 10 percent of thrift sale proceeds to local charities like the United Way, a crisis nursery, area schools and the broader Minnesota Citizens Concerned for Life. She’s also created a “Believe in the Backpack” charity whereby she fills backpacks for kids in foster care.

In the short time I’ve spent with Bernadette, it’s clear to me that this Osakis native and former daycare provider loves kids and cares about folks in my hometown enough to open her own little general store on the prairie. And for that I am grateful. 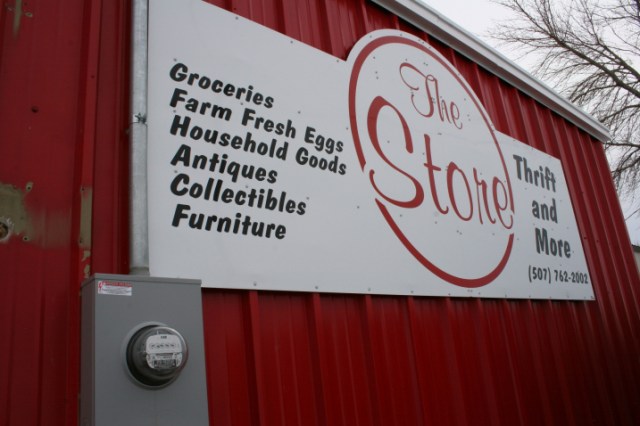 Photo by Audrey Kletscher Helbling
This sign graces the front of The Store: Thrift and More.

Little general store on the prairie