I looked up the demographic information for the zip codes of the top-10 e-pulltabs locations. While it’s well understood that gambling is a regressive tax (wealthy people don’t waste money on stupid things, leaving non-wealthy people in the position of financing an NFL stadium) this may help illustrate how regressive this particular tax is in practice.

The top-10 zip codes where e-pulltabs are having the most success at extracting income from communities have a median household income of $48,355, or 14% below the state average.

According to the 2010 census, one third of the households near Porky’s Bar – the #1 venue in the state for subsidizing Zygi Wilf’s wealth – live below the poverty line. 94% of students at the nearby grade school are eligible for free or reduced lunch. 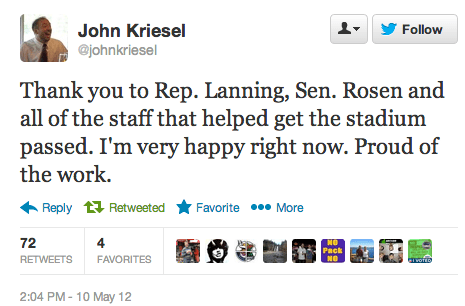 Rep. John Kriesel was the author of the e-pulltabs bill that became the funding mechanism for subsidizing the National Football League. Now we can see what his legislation looks like in practice.

Kriesel, who did not run for re-election, represented Cottage Grove, which has contributed nothing to the Vikings stadium to date, since they have no e-pulltabs venues: 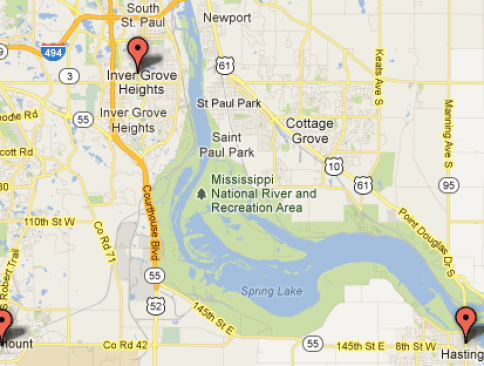 Quite a deal, eh? Stick gambling devices in poor communities so you can extract money from them in order to subsidize the National Football League, the Minnesota Vikings, and Vikings season ticket holders. None of whom actually need to be subsidized. But, they have better lobbyists than people who can’t afford lobbyists, and Rep Kriesel was willing to listen to those lobbyists.

By the way, one of the most ridiculous claims in favor of e-pulltabs came from King Wilson, who was then head of the charitable organization lobbying for e-pulltabs:

“We’re not expanding anything, we’re just taking what we’ve already got and updating it to fit current technology,” said King Wilson, executive director of Allied Charities of Minnesota.

So, nothing was being expanded, yet stadium funding projections were built on a $40 million per year expansion in gambling revenues through e-pulltabs. Shortly after the stadium bill passed, King Wilson resigned and moved to Hawaii. Perhaps a local reporter could talk their boss into a trip to the islands to gather some quotes for Vikings stadium bill anniversary story?

What are the demographics of the communities subsidizing the Vikings stadium?