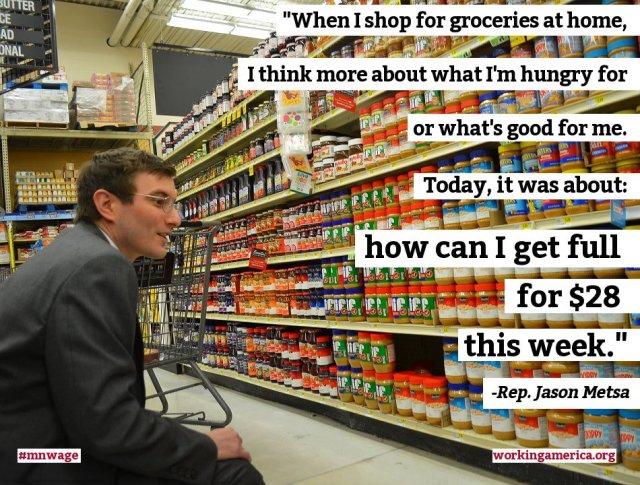 Last week, freshman State Rep. Jason Metsa (DFL-Virginia) lived on minimum wage as part of a challenge sponsored by Working America, an affiliate of the AFL-CIO. The effort was designed to show the challenges facing the working poor as part of the debate over raising Minnesota’s minimum wage to what workers’ groups call a “living wage.”

Now, a sentence like that will probably send many skittering to their respective political camps. Metsa, a longtime Range labor organizer, supports raising the minimum wage, something the AFL-CIO strongly advocates. Metsa sits in the legislative seat previously held by the last representative to successfully raise the minimum wage in Minnesota, Tom Rukavina. Business organizations like the state Chamber of Commerce have opposed efforts to raise the minimum wage, saying that it would eliminate jobs with rising costs.

Nonetheless, an effort like this is a good time for reflection and I’d encourage to read about Metsa’s observations on the experience. Kudos to him for trying it.

Part of the reason I’m glad to see things like this is that it puts the issue in real terms. It’s one thing for a left-aligned union to battle with a right-aligned chamber of commerce over an issue determined by an electoral contest. That can make something like this feel like watching a sports match. It’s quite another thing to live and work just above the poverty line.

I’m kind of sensitive to these things because, like many Iron Rangers who grew up in the 1980s, my family was the textbook definition of working poor. Dad worked full time for his father’s business for a salary that roughly equaled the cost of a newer used domestic family car. Mom stayed home with us kids. We spent a little time on assistance, but mostly not. No health insurance. No savings. I am not saying this to curry favor or special consideration; most of my friends were in the same situation or worse. After all, I had two parents who loved us and none of us got sick.

In the left vs. right discussion over policy leaders often overlook the practical. Programs may be advanced that fail to actually connect with the people who need the services. People can be told to work hard and invest in their own futures, but in a context where 9 will fail for every success. The conditions make the safe, conservative choice always to stay put, eking things out week to week. Politicians in general seem out of touch, which is among the reasons the working poor is among the largest group of non-voters, even in a state with historically high voter turnout like Minnesota. People ask if I was raised Republican or Democrat? I was raised working poor. My parents rarely voted at all and when they did, ironically, they canceled each other out.

So, yes, consider what Metsa says about his experiences. Consider these thoughts in John Cheese’s column “The 5 stupidest habits you develop growing up poor,” which sounds rough but is fairly spot on. What value to do we place on the human beings who work the jobs you only work when you’re poor? Making everyone rich sounds great, but still — these jobs remain, and these people.