Sometimes I can’t believe my luck. Last Thursday I got to photograph a dress rehearsal of Blank Slate Theatre’s latest production: “Columbinus”. As a photographer I’m always looking for new subjects and projects. I don’t limit myself to weddings, portraits, or landscapes for instance. I think the work can start to get stale after a while if one limits oneself to certain kinds of photography. When you do different types of work you face different challenges that test your skills in different ways, those challenges improve your skills over-all, and keep your work fresh.

Last November when a friend asked if I’d be interested in photographing Blank Slate Theatre’s production of “Spring Awakening” I jumped at the chance. I had no idea what or where Blank Slate Theatre was, and I’d never heard of “Spring Awakening”, but I’ve always wanted to do more theatrical work and I didn’t have anything scheduled, so I grabbed my cameras and headed for the First Baptist Church in St. Paul. When I arrived at the church I found an amazing theater space and production company (in the basement). Blank Slate is a youth oriented theater company directed by Adam Arnold, who is a local psychotherapist.

Arnold doesn’t toss his young actors softballs. “Spring Awakening” was a musical tour through sexual orientation, suicide, and botched abortion. “Columbinus” is a slightly oblique examination of issues raised by the Columbine Massacre of 1999. The play was written by Stephen Karam and PJ Paparelli and combines written script with actual quotes from survivors and the shooters themselves as revealed in video tapes they made before the attack.

What does a monster look like? Would you recognize a monster if you met one? All you see in this play are teenagers, teenagers with problems and conflicts, but teenagers nonetheless. Eventually two of these teenagers emerge as killers who attack their classmates but the disquieting thing is they look like they just might decide to go bowling instead. The two killers, Freak and Loner, set about their task as if they’re planning a camping trip with a chilling detachment between who they are and what they’re doing. When the attack begins this play doesn’t blink, although the action itself isn’t graphic, the portrayal is direct and close (it’s a small theater space). After the attack we see the town attempting to come to terms with the incomprehensible, but in the end “closure” eludes them because while the killers are dead, they cannot be punished, the victims cannot live again, and the survivors cannot explain why they survived.

When something like this happens the first question that explodes in our heads is always: “why?” The truth is that there are limits to our understanding and our empathy, some things may simply be beyond understanding. Any explanations we construct are more of a reflection of ourselves than they are a window into the minds of monsters. The strength of the “Columbinus” is that it offers no explanation, it points to no direction, it just leaves us in the dark. Perhaps the most terrifying thing about monsters is that we cannot truly understand them. Humanity is supposed to be a universal experience and that’s a reassuring belief. “Columbinus” suggests that there may be people beyond our sympathy and empathy. It suggests there may be aliens amongst us but the difference between them and us is narrow yet somehow unbridgeable. 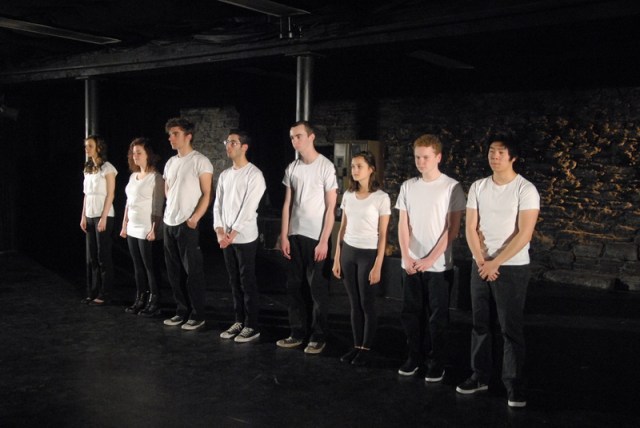 Arnold says that ideally “Columbinus” wouldn’t end with a curtain call, the actors would just exit, leaving the audience in the dark until the house lights come on. Nevertheless you’ll see a curtain call if you go to this play because Arnold doesn’t want to duplicate Columbine’s moral abyss, he wants the audience to have the closure that’s denied the characters in the play. We all know what happens when you look into the Abyss after all. Arnold wants the audience to see that the actors are normal happy kids, not monsters or emotional wrecks. We have to remind ourselves, teenagers are NOT aliens, they’re just teenagers. And these teenagers are fantastic actors.

Tickets are $17 for adults, $15 for students & seniors, and $13 for blank slate theatre actors. Purchase tickets online today by clicking here! Patrons may also purchase tickets at the door with credit card, cash, or check.

Due to strong language and violent content, columbinus at blank slate theatre is most appropriate for persons ages 12 & up.