This post is part of a series of posts concerning hPVI. The first phase of this series involves the introduction of brand spanking new 2013 hPVIs. That phase, the first, is the one in which this post belongs. 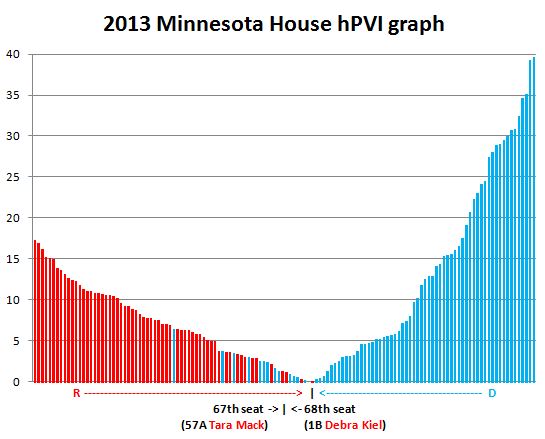 The first vertical bar acts as the demarcation between Republican and Democratic leaning seats. The location of the 67th and 68th seats, the number of seats needed for control of the House, is marked by the second vertical bar.

This graph looks very similar to the one for the Senate. That’s not really surprising, since house districts are nested within Senate districts you would expect them to be similar in the aggregate.

Like the Senate version, Democrats are heavily concentrated in a handful of districts while Republicans are spread out over a much larger number of districts. This is evidenced by the fact that the halfway point, the 67th and 68th seats, are in Republican leaning territory.

The graph below breaks down the districts into three buckets, roughly; GOP friendly, competitive and DFL friendly.

The Senate version of this graph had a larger amount of competitive districts, but the distributions are very similar.

The graph below is a further breakdown of that middle column, the theoretically competitive districts. 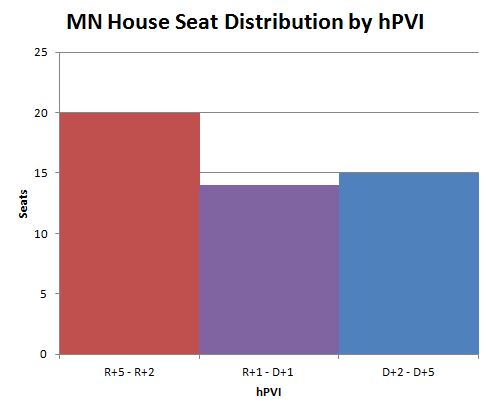 The differences in the House are not quite as stark as on the Senate side where the GOP had more than twice the number of these slightly advantageous districts. But while the advantage isn’t nearly as large, Republicans still have a bit of an advantage in these districts.