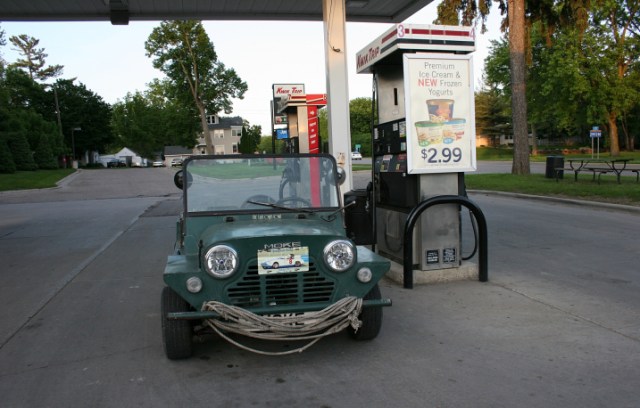 EVEN MY HUSBAND, an automotive machinist of more than 30 years, had never seen a Mini Moke. And he knows dates and years and makes and models and what’s under the hood and what problems are common with certain vehicles like I understand adjectives and adverbs and all the components of the English language. 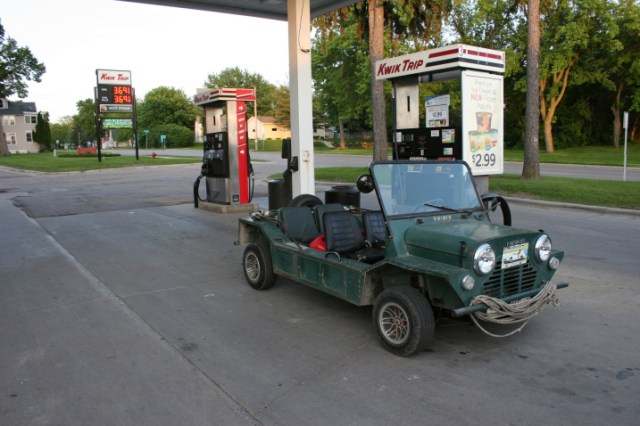 Thus, given his absence of Moke knowledge, Randy was just as intrigued as me by the mini British utility vehicle that pulled up to the gas pumps at a Faribault convenience store on a recent weekday evening.

I happened to have my camera with me, as I happen to have most of the time. And, after seeking permission from Faribault resident Greg Youngdahl, I photographed his 1969 Mini Moke, which he’s owned some 10 -15 years. 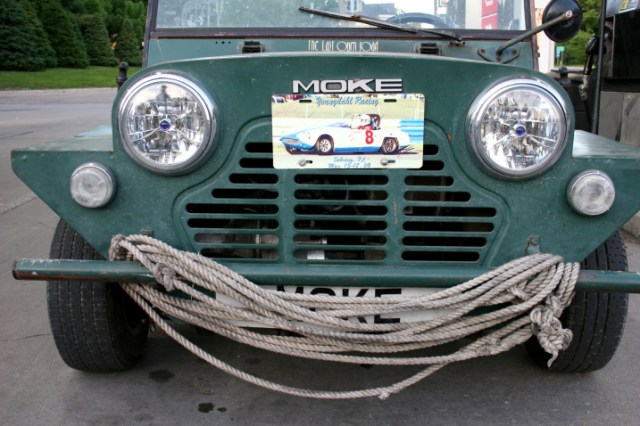 Photo by Audrey Kletscher Helbling
The race car photo on the front is of Robert Youngdahl. The rope? It’s always been there.

The jeep-like vehicle originally belonged to his father, Robert Youngdahl, who died several years ago and who used the Moke as a pit vehicle when racing his vintage race cars in Brainerd. The younger Youngdahl also races at Brainerd International Raceway and competes with his Miata. He often hauls the Moke north and laps around the track. 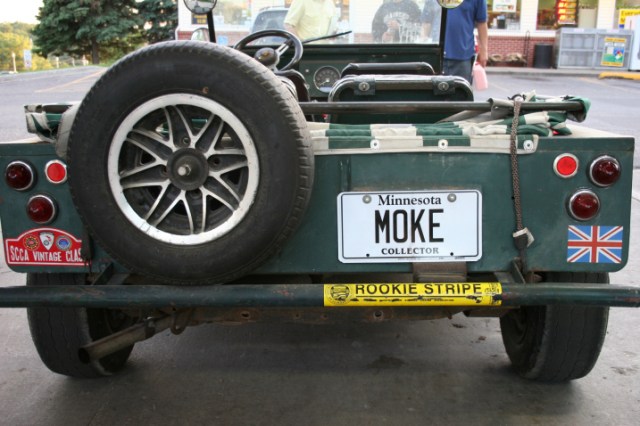 But, mostly, he drives the jeep around town—to pick up gas for the lawnmower, as he was on this Thursday evening, or to visit a neighbor. 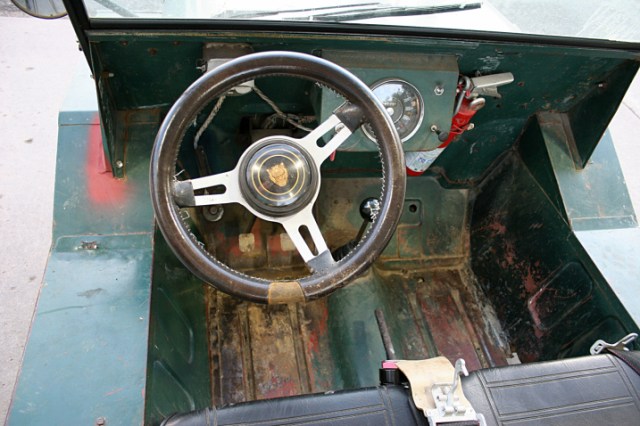 Photo by Audrey Kletscher Helbling
Youngdahl plans to keep his father’s Moke “as is.”

As a tribute to his dad, Youngdahl’s keeping the Moke original, with no plans to restore it like the other two Mokes he owns. 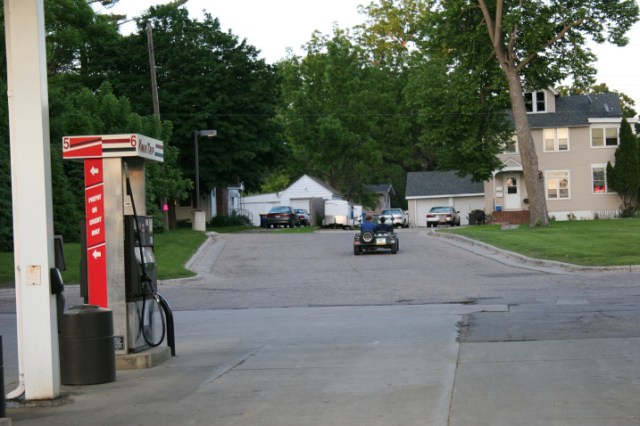 Photo by Audrey Kletscher Helbling
This photo really emphasizes the smallness of the Mini Moke.

And as an aside, if his Mini Moke seems vaguely familiar, perhaps you remember seeing a Moke on the 1978-1984 television series Fantasy Island. Actor Herve Villechaize, who was just under four feet tall and played the role of Tattoo (of “De plane! De plane! “fame), drove a Mini Moke. 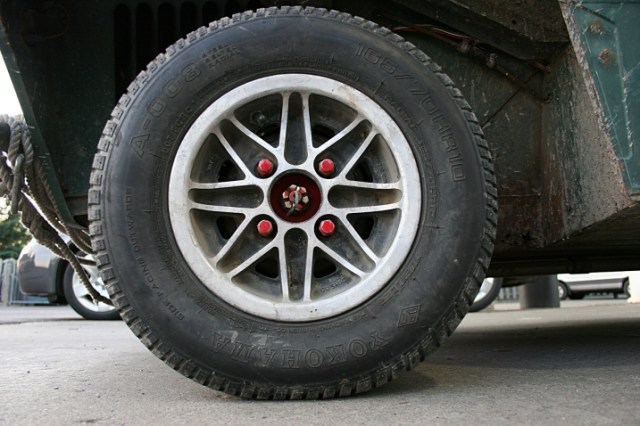 Photo by Audrey Kletscher Helbling
Because I like showing you details… 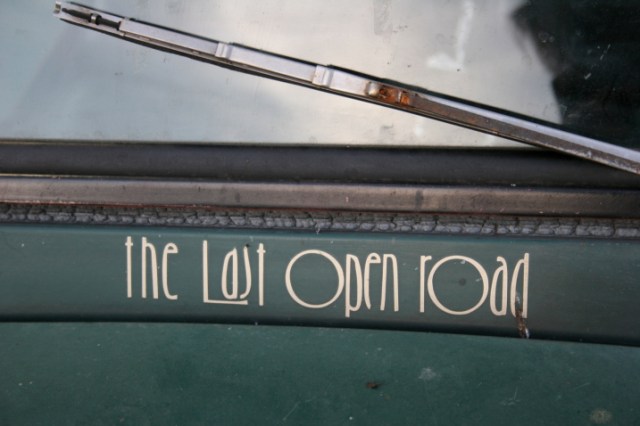 Photo by Audrey Kletscher Helbling
These words, the title of a book by Burt S. Levy, are imprinted below the windshield. The book focuses on one year in the life of racers on the open road race car circuit. 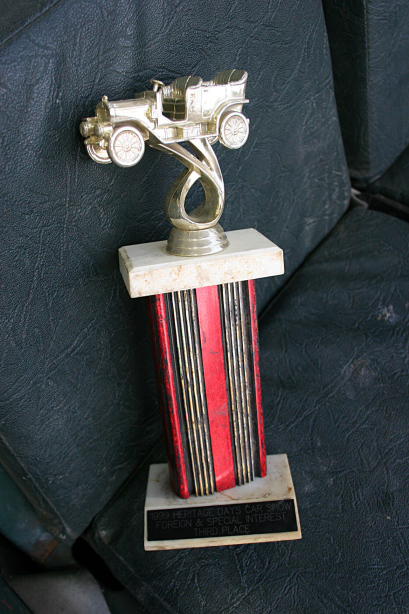 Photo by Audrey Kletscher Helbling
A 1999 Faribault Heritage Days Car Show third place trophy awarded to the Youngdahls’ Moke in the Foreign & Special Interest class. The trophy was stashed in the back of the Moke and dug out for this photo.

Oh, the vehicles that pull up to the gas pumps