One of the most common questions that home inspectors get when walking around the outside of a house with clients is “What’s that thing?”

Here’s my list of the most common doo-hickeys found at the exterior of homes in Minnesota, many of which are quite common at old houses in Minneapolis and Saint Paul.

You’ll find a phone line going from the water meter to this transmitter at the exterior of the home; this is part of an AMR (Automated Meter Reading) system.  This is how municipal water departments know how much to bill homeowners for their water usage.  They just aim a wand at this device from the road or yard and get their data.

This is an older type of transmitter that is currently being replaced with a newer type of AMR device that can transmit data for several miles.

This vent is found at older houses that have a gas meter inside the home.  There is a tube that goes from the gas regulator to this vent, which needs to terminate at the exterior to prevent the release of natural gas inside the house.

This device will shut off the home’s irrigation system if it’s raining outside, to prevent water from being wasted.  Rain sensors should be located in a location that receives about the same amount of rainfall as everything else in the yard.  You’ll typically find these at a back corner of a garage or house.

For the record, the rain sensor pictured above was crooked, which will prevent it from functioning properly.  This is a simple fix that just requires a little re-positioning.

This one is pretty self explanatory.  The fan pulls soil gases out from underneath the basement slab, and these soil gases get exhausted above the roof. Most systems are a little more inconspicuous, but sometimes there’s no simple way to hide a mitigation system on an older house.

Click the following link for more info on radon. 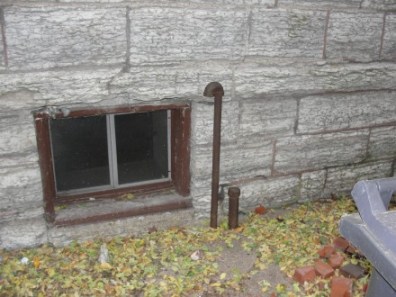 A lot of old houses in Minneapolis and Saint Paul had gutters and downspouts that directed rain water to the city’s sanitary sewer system.  It’s no longer acceptable to direct rain water to the city’s sanitary sewer, and hasn’t been for over 50 years.  The photo above shows what’s left after the system has been disconnected, although most will no longer be open at the top.

Many old houses in Minneapolis and Saint Paul still have coal chute doors.  This was the access door to the coal chute. It’s not critical that the doors be removed, but they should at least be secure, weather-tight, and insulated if left in place.

Just for fun, click the following link for a photo of a coal chute that still had coal sitting in it, which we shared on our Facebook page earlier this year.  This was at an old house that we inspected in Minneapolis.

Did I miss any?

Reuben is a second generation home inspector with a passion for his work. He grew up remodeling homes and learning about carpentry since he was old enough to hold a hammer. Reuben has worked for Structure Tech since 1997.

FAQ: ‘What’s that thing on the side of the house?’