Keeping in line with my New Year’s resolution to better informed about stuff, I bought a Star Tribune last Sunday. In it, I noticed a nice, big chart under the homes section titled “Figures for rental properties, 3rd quarter of 2013.”

The data shows average rent, number of units, and vacancy rate for various apartment sizes across Minneapolis, St. Paul, as well as the Suburbs North, East, Northwest-West-South of the Twin Cities, and Suburbs South of the Minnesota River.

A few things jumped out at me as I looked over the numbers:

I loaded the data into a spreadsheet which you can view here, crunched the numbers and came up with a few summaries. Visualizing this data is important, but also deriving further statistics from what we’re given (such as rent paid by an average person, which I estimated as SUM[(avg rent price per unit) * (unit occupancy rate) * (number of units)] / SUM[(number of bedrooms)*(unit occupancy rate)*(number of units)]) proved fruitful. Here’s what I found:

Average rent an apartment-dweller pays in the Twin Cities 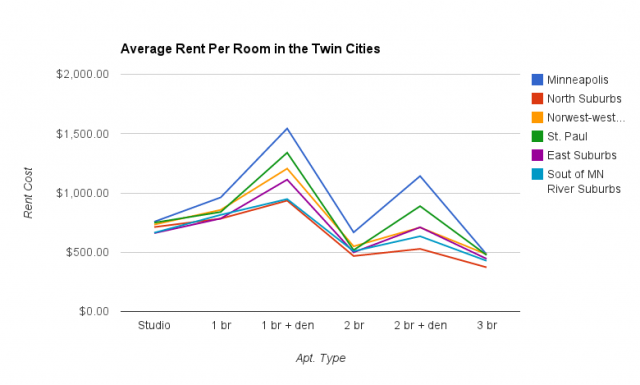 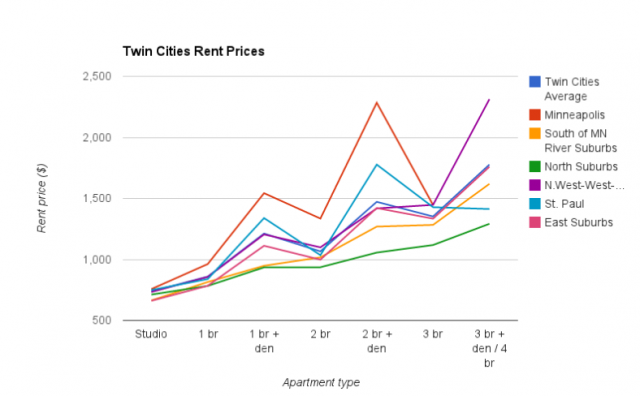 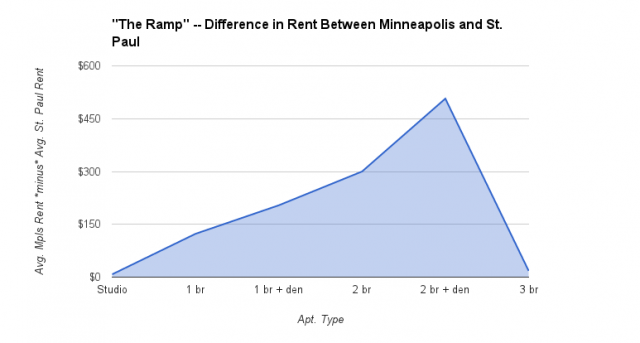 The “ramp” effect shown in the bottom chart is probably the most significant finding. Overall, renters in St. Paul pay just about 80% of those in Minneapolis, but I’d guess there’s huge variability between that number. As an individual who lives in a 2 br with a den in Minneapolis, the data show I have a good reason to be jealous of people who live across 280. On the other hand, if my apartment had another bedroom, we’d be almost exactly on parity.

The only mechanics I can think of that would cause this trend have to do with demand affected by college students or the number of houses available. At a glance, the vacancy rates don’t seem to far off between Minneapolis and St. Paul, though as I mentioned, the data is all available here for you to poke through some more.

Some followup questions into this phenomenon would be: