President Obama came to St Paul to propose an aggressive new investment in transportation infrastructure, $300B over 4 years. It was a good show that messed up traffic throughout the city, which was only fitting. That increase of $75B per year comes on top of the current $48B per year, or a 150% increase. It’s needed, and as we’ve noted before investments in infrastructure have a great payback for the economy.

But what’s new about this is that the money to pay for it is to come from an overhaul of the corporate tax system, which is also badly needed. The details have yet to be announced, but the overall hike is $150B per year, with half going to infrastructure and the rest to deficit reduction. So what’s not to like about this plan?

It’s a half-step at best, and in so many ways.

The payback for infrastructure investment is huge. A study by The College of William & Mary showed that the immediate payback is roughly double the economic activity of the money invested, with $3.20 in longer term payback on top of it. Given the crumbling infrastructure that we are all living with, the investment proposed is a good one all around. An estimated $1.2T is needed to bring our roads and rails up to par, so the proposal is a good one, if low.

It would have been better in the darkest days of the depression, but it’s like planting a tree. The best time to have done it was 20 years ago, the second best time is now.

Corporate taxes are also a horrible mess, with our 48% top rate the highest in the developed world. Even with that, taxes are shockingly low and bring in an estimated $229B less than they would if collections were simply at the average for the last 65 years. That happens because of a complex web of deductions and credits that have been carved out over the years, generally for specific industries as the infamous “special interests.” It pays to lobby well.

What Obama is proposing, details yet to come, seems to be on the low end of that figure, too.

So what’s not to like about this plan? Offhand it marries badly needed action with badly needed reform. It’s a good proposal even before we get the specifics on the corporate tax, given how high corporate profits have been over the last year. But it does beg the question as to what happens to the highway trust fund, which since 1955 has been funded primarily by taxes on gasoline, the motor fuels tax.

The last time this was raised was in 1993, to 18 cents per gallon. If it kept up with inflation it would be at 29 cents per gallon now, a 61% difference. More interesting is that the total receipts for the gas tax have fallen since 2007 because of improved conservation. We burned through over 142B gallons of gasoline that year, but only 132B in 2013.

If we had followed inflation and kept using gasoline at the same rate as 2007 we would have $67B per year coming into the Highway Trust fund instead of $39B, and it would not be running a deficit made up from general funds of $9B per year. That difference of $28B per year would only cover a third of Obama’s plan, but it is worth thinking about. 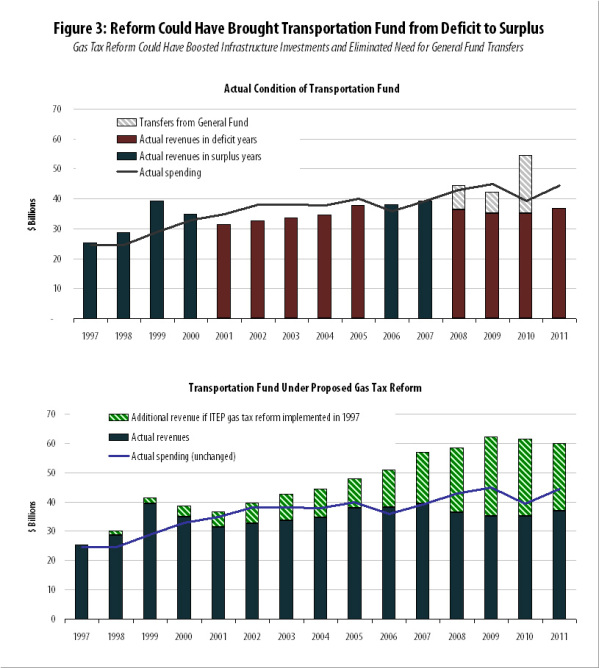 Do we have to raise the gas tax to fund highways? Probably not. While 11 cents is hardly anything, given that prices rise and fall as much as a dollar every year, the plan to finally separate infrastructure development from the gasoline tax is probably going to have to happen. In essence, it’s been broken for years as general fund money has made up the difference in our highway spending.

But if we’re going to go down this road, it begs the question about separating out ordinary expenses from capital expenses, as every state and corporation in this nation does. Essentially running the Highway Trust Fund into the ditch points out how hopelessly 18th Century the current budget procedure is and why even more reform is needed.

So, once again, President Obama is proposing a solution that is a few years late and a few dollars short. He’s proposing to pay for it with a good idea that also seems to run a bit behind. And the overall reform that’s coming down is at best a half-measure, dodging the really hard decisions that need to be made to completely sort out our antiquated budget system.

It’s a classic for Obama all around. But it’s still a good idea and it’s all badly needed, even as a half-step. Let’s see how the U.S. House responds to it before we get excited, however.