Tony Desnick and I both write about and are ardent promoters of bicycles for daily transportation. Tony also works for bikeshare outfit Nice Ride and is part of a car-lite household. He rides a bicycle to work nearly every day, on even the most brutal and inhospitable days that MN can throw at him. Yes, Minnesotans are a hearty bunch. (Note that this winter wimp of a writer is from Alabama.)

Not surprisingly, our getting together is often premised on something having to do with bicycles (and desire for finding good cappuccinos). Our conversation though, always includes talk of cars. A lot of talk about cars. Not how bad they are but how great they are.

We are both car guys. We’ve worked on a lot of cars over the years and we’ve both raced (though my SCCA racing is piddly compared to his pro racing). I also raced motocross (Bultaco) and still enjoy occasional trail rides.

I’m writing this from a suburban coffee place where I arrived in my not-so-small SUV. I’d like to have a smaller car for when I don’t need the hauling capacity of the SUV but the economics haven’t yet worked out (though a Leaf or i3 may be in my future). For Garage Logic fans, I have a cylinder index of 35, soon to be 39 with the addition of a new fishing boat. 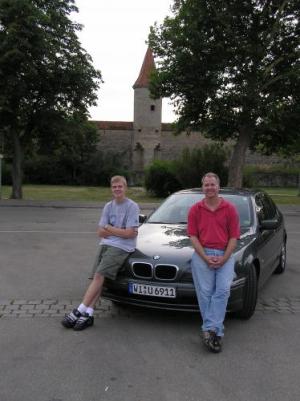 Courtesy of Walker Angell
Cruising along European motorways, usually at whatever
speed you desire, with anyone ever being in your way a
rarity, is quite enjoyable.

One thing I really enjoy about my frequent trips to Europe, besides eating, is that driving is much more pleasurable, in general (Italy and Belgium sometimes excepted) and there’s nothing like cruising down a motorway at 120mph. There’s also the drool element—cars that you rarely get to see in the U.S. Lot’s of them.

I’d guess that this is not the image most people have of someone who writes about our need for more and better and safer bicycle infrastructure and is a supporter of using cars less and our legs more.

I’m not unusual. There are certainly some folks who think that cars are bad and that we should get rid of them all. I’m obviously not one of those, nor are most of the people I know who promote better bicycling and pedestrian infrastructure. At a recent get together of about a dozen streets.mn folk, half had come by car.

Note: in case you haven’t guessed, streets.mn has no editorial position—discussions amongst writers are far from kum-by-yah moments though there is still a great deal of mutual respect. And this is also one of the great strengths of streets.mn. It’s not an echo chamber.

I often ride my bicycle or bakfiets for local trips to a cafe, grocery store, or hardware store. Once a clerk at an auto parts place commented that it was too bad I had to ride my bicycle to get parts to fix my car. I told him my car was fine, the parts were for our ski boat (old Nautique w/ an 8 cylinder 343), and that riding was more enjoyable than driving. His reaction was priceless. 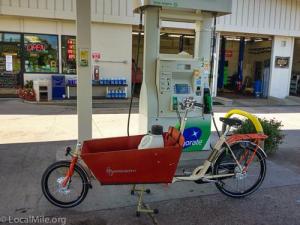 Courtesy of Walker Angell
often ride my Bakfiets to the local gas station to to fill up
five gallon cans (I can carry three) for toys and tools.

However, if the weather is really uninviting, I need extra cargo space, have a long way to go, or am crunched for time, my truck is my vehicle of choice. Let’s be real, most of us don’t want to spend much time outside when it’s -20f with a stiff breeze (Bill Lindeke, Julie Kosbab, and Tony Desnick excepted). A three block walk is quite doable and enjoyable, on even the coldest of mornings, but a three mile bicycle ride to the hardware store, and then back, ain’t gonna happen. For me anyway.

Today it was -4ºF when I left Shoreview for a meeting seven miles away in Roseville. While Shoreview has safe bicycle infrastructure, Roseville does not. I know people who would have ridden their bicycle today. Not me. Besides, my truck has heated seats, my bicycle does not.

On my bicycle I’m realistically good for about one mile in any temp, two miles if it’s over 10f, four miles above 20ºF, and almost any distance above 30ºF. Heavy snow can sway me to my car as can heavy rain.

Weather aside, I’ll almost always ride my bicycle for forays of five or so miles round-trip. Less often for longer journeys, though with good infrastructure, not-so-miserable weather, and time, I prefer riding. 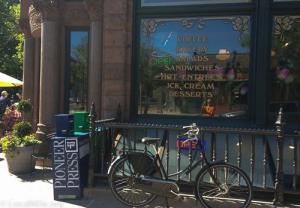 Courtesy of Walker Angell
With time, weather, and infrastructure on my side a thirty
mile day of meetings is quite enjoyable.

The above is based on my office in Shoreview where I have relatively safe and segregated bicycle paths to numerous places I routinely go. From my home in Vadnais Heights, due to the lack of safe bicycling infrastructure, I don’t ride at all during the winter and am less likely on other days, even though destinations are closer.

To borrow a thought from Joe Soucheray, it’s simple garage logic — the right tool for the job. My preference for traveling to Duluth would be by train. Since that is not an option I’ll drive (and I’d prefer to be able to do so at about 90 to 110 mph). From Shoreview to downtown Minneapolis I’d prefer a rail option, but lacking that, time, and decent infrastructure, I’ll be driving.

My principles say that I’d like to ride my bicycle for nearly all of my transportation. Practical reality messes that up when my wife is healing from a broken hip and refuses the offer of extra pillows in the bakfiets (and besides, it doesn’t have heated seats).

We have to play the hand we’re dealt.  For me that’s living somewhere that makes cars a bit more of a necessity, for many of us anyway, than I’d like (note that most families in The Netherlands do own and drive cars as well).

But I’ll keep pushing. And hopefully next year I and my neighbors will ride or walk a bit more and drive a bit less and over time we might make some progress. A mile here and a mile there and pretty soon we’re talking real transportation.

Can’t have it both ways?

To hear some folks, it’s hypocritical for someone like me, who drives a car, to shout about our need for more and better bicycle and pedestrian ways. Fortunately these are few and far between. I will confess though to a bit of guilt for how many mornings I’ve driven 10 miles, past numerous Caribou’s, to enjoy a good cappuccino.

Europe is, for me anyway, car nirvana. Not only is it a better place to drive, it’s also much safer. For each mile you drive, you are about three times as likely to die on a U.S. roadway as on one in Europe.

Many people in the U.S. say you can’t have it both ways. Building safe and segregated bicycle and pedestrian infrastructure will cause great harm to drivers. It will take space and money away from them and slow them down.

Yet, Europe manages to be much better and safer and enjoyable for all three; driving, bicycling, and walking.

We can do better and I’m confident we will, one mile at a time.