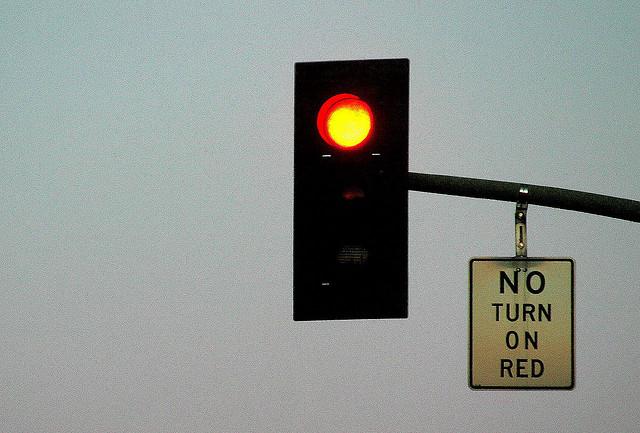 CC/Flickr/Thomas Hawk
More than a third of pedestrian/car crashes occur in Minnesota in part because of driver’s failure to yield.

On February 12th of this year a woman was killed in Minneapolis while walking in a crosswalk. She had the right of way. She was hit by a truck taking a right turn on red, which trucks are generally legally allowed to do (although not while a person is in a crosswalk):

“The driver of a vehicle which is stopped as close as practicable at the entrance to the crosswalk . . . in obedience to a red or stop signal, and with the intention of making a right turn may make such right turn, after stopping, unless an official sign has been erected prohibiting such movement, but shall yield the right-of-way to pedestrians and other traffic lawfully proceeding as directed by the signal at said intersection.” Minneapolis Code of Ordinances, Title 18, section 474.630.

According to an MPR review of 2007-2011 crash data, more than a third of pedestrian/car crashes occur in Minnesota in part because of driver’s failure to yield. This means that almost 300 people a year are injured due to driver error.

According to a 2002 paper, there were 1,166 crashes involving people on foot or bicyclists in Minnesota and Illinois combined between 1985 and 1998/9 combined. This equals just .04% of all crashes (including vehicle/vehicle crashes) during that time period. This figure is consistent with figures in a 1995 National Highway Traffic Safety Administration report.

According to the National Highway Traffic Safety Administration, “[t]he majority of these RTOR crashes involved a driver looking left for a gap in traffic and striking a pedestrian or bicyclist coming from the driver’s right.”

Even when someone on foot or a cyclist is not hit by right-turning vehicles (an admittedly rare, thought unnecessary, occurrence), right turning vehicles still do a significant disservice to vulnerable users. Right-turning vehicles often pull into the crosswalk so that the driver of the vehicle can actually see oncoming car traffic. As a result, people crossing the intersection on foot lose that small stretch of street that is supposed to be temporarily theirs. That person must then walk around the front or the back of the imposing vehicle. 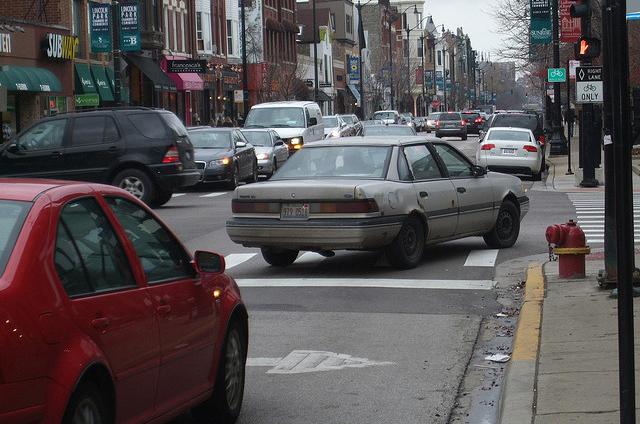 CC/Flickr/Steven Vance
turning vehicles often pull into the crosswalk so that the driver of the vehicle can actually see oncoming car traffic.

If the person walks in front of the vehicle, he or she must be on guard in case the vehicle attempts to leap into traffic. If the person passes behind the vehicle, he or she must weave between multiple vehicles, any of which could move. Therefore, right turns on red mean that people can never walk across the street, even when they have the right of way, as if they own the space. People on foot must be constantly aware of their vulnerability, can never go on a walk and let their mind wander.

Shouldn’t pedestrians – people – be able to simply be in their community without wearing “light colors” and “retro-reflective materials,” as the State of Minnesota suggests? TheFederal Highway Administration appears to think so: “Prohibiting RTOR should be considered where exclusive pedestrian phases or high pedestrian volumes are present.”

During the oil and energy crises of the 1970s, the U.S. federal government encouragedjurisdictions to allow right turns on red as a fuel saving measure. The Federal Highway Administration estimated that right turns on red would save between 1 and 4.6 seconds for each driver at a red light.

While turning right on red does in fact save fuel for car drivers, the Massachusetts DOT points out that “[t]he best way to reduce fuel use is to drive less.” With 65% of trips under a mile in the U.S. made by car, improving the experience of being a pedestrian or biker, as well as improving actual safety, could result in significant fuel savings by encouraging people to walk and bike more.

If Minnesota jurisdictions eliminated, or at least reduced, right turns on red, they could improve both actual and perceived safety for cyclists and people on foot. This in turn could potentially encourage more people to travel using their own power. And this result, if it occurred, would produce the outcome right turns on red were initially intended to produce: lowered energy consumption.

As an obvious first step, mayors and council members should ban right turns on red in areas with heavy foot traffic. This would not be a step in a new direction. For example, the City of Minneapolis already has additional safety measures in place in heavy foot travel areas. The Minneapolis Code of Ordinances states “No person shall ride a bicycle upon a sidewalk within a business district.” Title 18, Chapter 490, section 490.140. State statute clarifies that “‘Business district’ means the territory contiguous to and including a highway when 50 percent or more of the frontage thereon for a distance of 300 feet or more is occupied by buildings in use for business.” Minn Stat 169.01 subd. 39.

Minneapolis, along with other jurisdictions, should take this step toward making our communities more walkable places.

The case against right turn on red