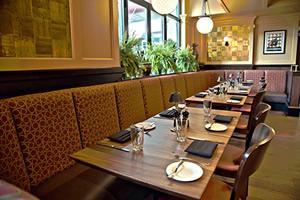 Hot off visiting his delicious and “high-class” new restaurant, Brasserie Zentral, TC Jewfolk sat down with MOT Chef Russell Klein to talk bagels, foie gras, and why he “wouldn’t touch a Jewish deli in this town with a 10-foot pole.”

If you missed Leora’s review of our lunch experience, we definitely suggest it — but not on an empty stomach. After presiding over what’s debatably the most popular restaurant in St. Paul, Meritage, Klein crossed the river to downtown Minneapolis with a much more ambitious goal in mind. “Brasserie Zentral is kind of the first part of a larger project,” he said. There’s the 150-seat fine dining brasserie, which he developed after his travels through Europe. ”France is where most people think about it, but really they’re in Germany, Austria, Hungary, all that.”

In addition, he plans a “Cafe Zentral” to open on the skyway level this summer, a wine bar called “Foreign Legion” a wine and spirits shop across the hall from the bar, and a private dining area called the “Moon Room.” All zentered on the main floor of the Soo Line Building on Marquette Avenue.

Before asking him more about Zentral, we had to address a rumor that we heard that he shipped bagels in for his Meritage brunch direct from New York — because if that were true he’d instantly have the best, and most under the radar, bagels in all the Twin Cities.

“We used to bring them in from New York,” this Queens-bred chef said. “But the shipping got outrageous.”

So where does he get them now? “St. Paul Bagelry does a decent job. It’s not, you know —  am I gonna tell you it’s as good as a New York bagel? It’s not. And no it’s not the water. But it’s good enough that honestly, for what shipping was costing me, it just wasn’t worth it anymore.”

We also heard another rumor — okay, straight from him, actually, when we visited last week — that foie gras, a big player on his Zentral menu, has a long Jewish tradition. Clearly we were still thinking about it, because we asked him about it again. “Foie gras goes all the way back to ancient Egypt, which is where they first started force feeding foie gras. How much of that was, you know, the slaves of Egypt… I don’t know.”

Foie gras is made by force feeding duck or geese to fatten their livers. It sounds miserable, but we don’t claim to be experts in the process, and there’s even some debate whether the cruel-sounding “force-feeding” is even cruel at all. However, we were more concerned with the specific intersections of Judaism and foie gras than the broader, ethical discussion. “Liver itself is not kosher, as I understand it,” said Chef Klein. (Between the foie gras at Zentral and the extensive oyster bar at Meritage, clearly Chef Klein isn’t too concerned about kashrut.) He said he spoke with a rabbi recently who confirmed that liver isn’t kosher. “But foie gras is used a lot throughout the the region. It’s a part of Jewish cooking. And schmaltz! The popular Ashkenazi cooking fat is just duck fat. “So it’s all kind of connected to the Jewish use of schmaltz.”

“There’s a book out there called Foie Gras: A Passion – it’s about 20 years old now — that has a whole chapter on the intersection of Jewish cooking and foie gras,” he said. “The guy who wrote it is a guy named Michael Ginor, who’s an Israeli Jew who started Hudson Valley Foie Gras in New York.”

In terms of the Jewishness of Zentral, specifically, Klein admitted that he’s not much of a religious Jew, but “being a Jew is important to me culturally. It is my background, both sides of my family.” While there’s nothing specifically Jewish on the menu, “The area we’re talking about is sort of at the heart of the Ashkenazi Jewish life. The culture and cuisine of those areas is so intertwined with Jewish cooking that it can’t help but influence what we’re doing here.”

Finally, we couldn’t resist asking this über-talented Jewish chef when he was going to open the successful Jewish deli we’re all craving. He made it pretty clear that it would never happen. ”Let’s face it,” he said, “we’re notoriously picky people.” We needed more than that so he elaborated: “No matter what you do with a Jewish deli it’s never going to be as good as what people imagine Katz’s to be, or Carnegie or any of those places. Which, by the way, they’re not as good as they used to be either — and a lot of them were never that good to begin with. You know, we all just have this memory of them.”

He also reasoned that making an affordable deli sandwich, say pastrami on rye, is really tricky to do. “The reality is that to do a big, thick pastrami sandwich nowadays — it’s a $15, $18 sandwich. It’s very expensive. People don’t want to spend that much.”

Still, he said, “I would love to see one.” It just won’t be him opening it. For now, he’ll stick to making quality food with good service. ”What I really care about is that we’ve got a full, successful restaurant, that people are happy and want to come back. And after that, it doesn’t really matter.”