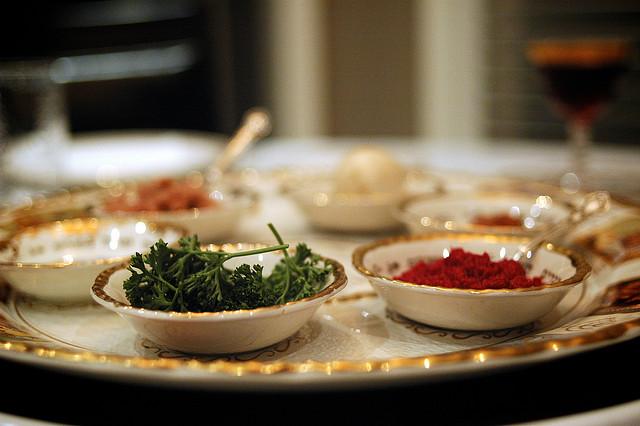 It’s Passover, and lots of Christians — especially evangelicals — are attending Passover Seder dinners. But they’re not traditional Seder dinners, with Jews. No, they’re a co-opted rite, sometimes hosted by a “messianic” Jew, and sometimes just by Christians who’ve read a Wikipedia entry.

I’ve been to a Seder for the past couple years. My family and I have been hosted by Rabbi Joseph Edelheit, a sometime contributor to this blog, and a dear friend. In his role as director of the religious studies program at St. Cloud State University, Joseph has hosted Seder dinners for Christian students — at the Lutheran campus ministry for instance — but the difference is that he’s really Jewish. He’s a rabbi. He’s not playacting. This is really his thing.

Many Christians, particularly evangelicals, are drawn to primitive Christianity. They want to follow Jesus like those first Christians did, before Constantine and Charlemagne mucked everything up with Christendom. I personally think that’s a noble goal, and I’m not totally averse to it. However, having a Seder meal at your church or Christian college is not the way to do here. Here’s why:

1) We know very little about Jesus’ Passover meal. The Gospels themselves equivocate on the meal — either it took place on Passover, or on the night before Passover. In the Synoptics (and Paul), there is bread and wine, but in John only a cup into which both Judas and Jesus dipped their hands. Bread and wine, blessed and passed, was common for any Sabbath meal with family or friends. The Passover meal in the first century surely featured meat, but there’s no mention of that in the Gospels or Paul.

2) The Seder meal as we know it developed well after Jesus lived. Before 70 CE, Passover was a festival celebrated by going to Jerusalem, to the temple. That’s why Jesus and the disciples went there. It wasn’t until after the temple was razed that modern, rabbinic Judaism was born, and along with it the practices and rites we know now as synagogue worship and home-based practices like the Seder dinner. In other words, Jesus didn’t eat horseradish or sip salt water.

3) Early Christian eucharistic meals were not patterned after the Seder, but after the Greco-Roman symposium meal. At a symposium, family and friends would gather for a meal to discuss philosophy, the gods, government, and the like. Social distinctions were temporarily ignored; men and women ate together. The eucharistic meal in the early church took this concept and amplified it, even allowing slaves to join the company.

4) The early church often met for eucharist in cemeteries. In the Roman world, friends and relatives of a deceased person would meet at the person’s grace in the necropolis on the 3rd and 30th day after death and have a feast on the sarcophagus. The party was called a refrigerium, meaning “refreshment” for the dead, and the top of the sarcophagus even had a hole to pore food and wine into the casket. Early Christians, often persecuted for gathering together, took up this practice because Roman officials had so much respect for the dead that the church could meet unmolested in the cemetery. So successful was this rite, that Christians began celebrating the anniversaries of martyrs by meeting at their graves and having an all-night party — one of the only times when women were allowed to be out past dark in the ancient world. The practice was still common in the late 4th century, so much that both Ambrose and Augustine preached against it, but to no avail.

5) How would you feel if a rabbi or imam performed a mock baptism? That’d be pretty weird, right? That’s pretty much how it is when Christians take a practice that is central to Judaism and attempt to recreate it with Christian meaning. Virtually every Jew I’ve ever asked about this finds the practice offensive.

So, if you want to recreate an early church practice, pack a lunch and bottle of wine and go have a party in a cemetery. Or hold a Greek symposium, inviting people who come from different races and classes than you. That’d be a great way to be true to the early church, without stepping on the practice of another religion.