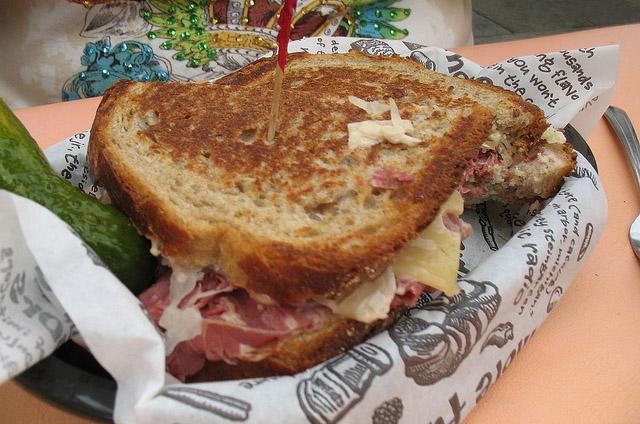 CC/Flickr/Jamie
“If every deli could charge $14 a sandwich, then perhaps an $11 or $12 minimum wage would be feasible.”

In a visit this month to the University of Michigan, for instance, the president stopped at the local deli Zingerman’s. He raved about its Reuben sandwich as well as the generous wages that the business offers. Like [Costco CEO] Mr. Jelinek, Zingerman’s co-founder Paul Saginaw supports hiking the minimum wage. He posted a minimum-wage manifesto on a company website last September.

As Mr. Obama relished the perfect sandwich prepared by well-paid employees, he neglected to mention how much he paid for the happy experience: Zingerman’s Reuben costs $14. That’s about three times as much as a Subway foot-long. When I was an undergraduate student at Michigan, I rarely dined at Zingerman’s because it was so expensive.

If every deli could charge $14 a sandwich, then perhaps an $11 or $12 minimum wage would be feasible. But your local sandwich shop cannot match the price points of a shop serving a parent-subsidized clientele in a college town. Expecting restaurants everywhere to do so is a recipe for business failure.

Actually, the prices at Subway have gone up a fair amount in recent days and you can only get a $5 footlong when they have a sale going. But Saltsman is correct concerning the prices at Zingerman’s. But it looks like they throw in a pickle, so that’s something. But if you want chips and a drink, you’re looking at about $20 a head. So a family of four wanting a quick lunch? $80, maybe more. I suppose some families can swing that, but I’d imagine that most people can’t. I certainly can’t, at least not very often.

And Saltsman makes an equally good point about pricing:

The president seems oblivious to pricing pressures that exist outside of high-end restaurant concepts in tony metropolitan areas. Labor Secretary Tom Perez’s March visit to a Shake Shack in Washington, D.C.—again, to promote the company’s above-minimum starting wage—was typical. While praising the restaurant’s wage structure, Mr. Perez did not mention that the least-expensive double cheeseburger on the menu sells for $6.90, or more than 40% more than a Double Quarter Pounder at the McDonald’s nearby.

If McDonald’s could raise burger prices by 40% without losing customers, it would have done so already without input from Messrs. Obama and Perez. But customers are price sensitive. The same dilemma exists at restaurants, grocery stores and countless other service businesses across the country. If higher prices aren’t an option for offsetting a wage hike, costs have to be reduced by eliminating jobs and other employment opportunities.

Emphasis mine. The Shake Shack’s prices are closer to what you might see at a Champps or Red Robin, but if you’re looking for a quick, inexpensive lunch, you’re not going to be going to either of those places. And if you are looking at over $50 for lunch for four people every time you go out to eat, even at a McDonald’s, you’re not going to see as many people eating out, and those that do will decrease their frequency of doing so. So yes, some people will make more money, but if business is down you’ll have less people working. Maybe that will work out well for everyone, but I kinda doubt it.