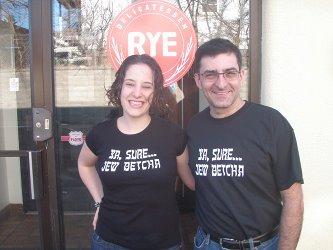 We need to start talking about what it means to lose a Jewish deli (and Jewish businesses generally), and how we as a Jewish community need to be supporting them more to ensure they stay afloat.

Rye was a cool Jew-ish deli where you could have matzo ball soup and a beer with your friends after work. It was a gathering place for the Jewish community where TC Jewfolk, J-Pride, Tolerance in Motion, and other community organizations hosted meaningful events from happy hours to fundraisers. It was the only restaurant I’ve ever seen that lit an electronic menorah for each night of Hanukkah behind the bar. It was the coolest Jew-ish deli in town with the Facebook love to prove it, even if it didn’t have the best tasting food around. Which it didn’t.

We’re Jews but we’re also Minnesotans, so we get hung up on being “Minnesota Nice.” We need to stop being Minnesota Nice Jews and just be Jews. Opinionated, pain-in-the-ass, tell-it-like-it-is, support your family no matter what kind of Jews. 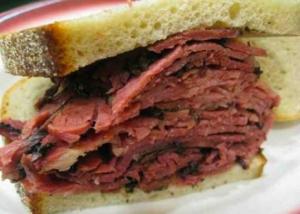 And what about the Jewish delis that are still here? When was the last time you went to Cecil’s Deli (St. Paul) for their amazing corned beef, potato salad & rye? (And did you know they deliver?)

Or Crossroads Deli (Minnetonka) for their matzah ball soup & pickled beets (perfect for a night when you’re feeling sick)?

I’m a Brother’s Deli (downtown Minneapolis) salad fanatic but their line disappears when the food trucks come out.

And Mort’s (Golden Valley)? I hear their sandwiches are super good but I’ve never actually been there, so maybe I’m part of the problem.

We need to SHOW UP and be HONEST. Don’t like a deli’s food? Tell them how to make it better. Never go there anymore because the service takes WAY too long? Tell the owner. These are all small businesses & every customer means something. So don’t just sit back & send your business elsewhere — keep our Jewish delis & restaurants & other small businesses alive & thriving: or as Rabbi Heschel said, pray with your feet. Make your actions count.

I will miss Rye. And yes, there will be another cool Jewish deli in town. The question will be, will we welcome it as family? Or will we ignore it to death?

This post was written by Leora Macabee Itman and originally published on TC Jewfolk. Follow TCJewfolk on Twitter:@tcjewfolk.

Rye oh Rye: Did we let our Jewish deli die?