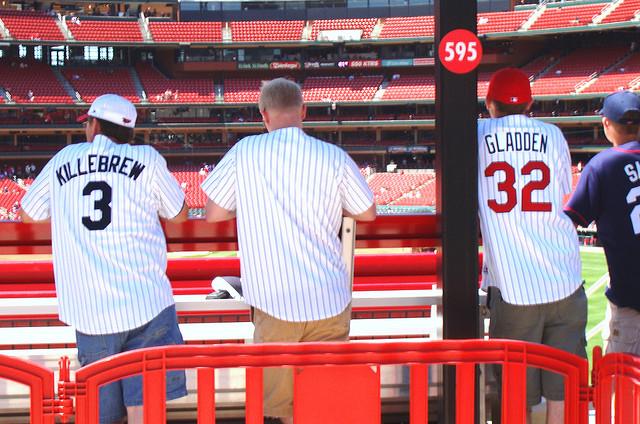 CC/Flickr/Doug Wallick
Prior to 1975, baseball fans didn’t wear the same uniforms as the players.

Prior to the middle of the 1970s there was a separation in baseball between fans and teams. In the thousands of photos that exist of crowds prior to 1975, you will not see team hats and shirts on fans. Now, such a photo shows that fans are also in uniform. This change occurred in 1975 or 1976 due to a chance encounter with an anthropology professor and the new Vice-Chairman of Major League Baseball Promotion Corporation, now MLB Properties. (The reason the company had that long, awkward title was that the NFL had a “Properties” organization, and baseball didn’t want to appear to be copying the NFL! )

I was that Vice-Chairman and we were starting a program that registered team trademarks (they weren’t all registered at the time) to allow licensing of those trademarks to merchandise manufacturers. In those days, it was commonplace for teams to allow others to sell merchandise with, say, the Detroit classic Old English ‘D’ logo as it was seen as good advertising. Teams received no revenue from such practices. I was looking for ways to gain control over that intellectual property and increase sales and generate revenue from the licensing of team-trademarked merchandise.

A chance meeting with an anthropology professor provided the rationale. In an hour long meeting, he explained that fans were like tribes in that they were organized around their teams: they had a pantheon of gods, the venerable old stars, shared lore of games and pennants won, songs — “Skol Vikings” and “We’re Gonna Win Twins” — and, most importanly, similar uniforms in designs and colors. The team’s hats and shirts being primary in this regard.

The professor went on to say that in a community, the members of tribes for various teams had allegiance only to that team. Where there was overlap, it was minor and a fan would have allegiance to one tribe only, but may have interest in another. In Minnesota, for example, a Twins fan may have interest in the Vikings, Wild and Timberwolves, or even the University’s teams, but were bound viscerally to the Twins.

I remember returning to the stadium that day wondering how to implement this information. I went to the merchanise department and checked on the team-trademarked goods being sold. There was little other than pins and badges — no real, authentic uniform articles. Wearing a T-shirt was intersting, but wearing an actual uniform shirt was critical to link between the fan and the player. This is the essence of this change in marketing. The fan and player would now wear the same clothing; isn’t that what members of the same tribes did, afterall? Is there any wonder at why some teams are named for tribes, like “Fighting Irish” and “Quakers?” (Furthermore, baseball is unique in that it has a maximum of fan participation in the game as fans chase foul balls and there are even civilian casualties from this pursuit.)

Prior to this moment, the rule was that only uniformed personnel could wear the actual uniform. I had once given a high school baseball coach a fitted official team cap that he proudly wore everywhere. I was chastised for breaking a sacrosanct rule. I was about to break that rule again. I went to the clubhouse and asked the equipment manager for some team jackets. These had previously been worn only by players on the field, a foreign concept today. I asked what they cost, tripled the amount (the seller would recive 20% of the sale price), and took them to a merchandise kiosk, hung them up and waited. The sale price, probably $45, was very high and nothing else sold for $10, so I asked a friend on mine to buy one and wear it. (What cost $45 in 1975 would cost $192 today!)

What was dramatic was the reaction of other fans, who wanted to know where he bought that jacket. A new market had been created. This event was reported to New York the next day and we started focusing on this concept as the core of merchandise sales. Some teams embraced it quicker than others and I was again chastised internally for this behavior, but the industry had changed.

I was at Target Field last night and it seems everyone wears some tribe/team clothing. Some celebrate the demi-gods, Killebrew, Oliva etc. Or the modern demi-gods, Mauer. Others remind us of things gone wrong like Cuddyer and Morneau, players playing for other tribes now. Surrounding the stadium are statues to the famous and most important executives and players in the team’s history.

Your team is your tribe, act and dress accordingly.