I’ve noted several times here (and elsewhere) that I came to Minnesota from New England, Massachusetts, specifically, and was actually born in Boston and grew up there and in several of its suburbs. This is of particular relevance because it seems to be hindering my ability to understand how Minnesota is managing, or not, its water. When, many years ago, Boston’s thirst kept growing and needed to be quenched, the Massachusetts legislature authorized relocating the population of four towns and flooding them to create the city’s water supply from Quabbin Reservoir. Of course, this was prior to the invention of Environmental Impact Statements, or else the mitigation measures required might have stopped the project and prevented “progress.” In those days, the need to support growth often lead to untrammeled political action with limited concern about the social impacts. I believe Massachusetts had, and may still have, substantially fewer public agencies involved in creating and controlling public water supplies than does Minnesota. To provide some insight into Minnesota’s water governance players, here’s a graphic from the Minnesota Water Sustainability Framework. What isn’t easy to read at the scale shown are the 90 Soil and Water Conservation Districts, the hundreds of cities and towns, the 87 counties and a multitude of watershed management organizations. 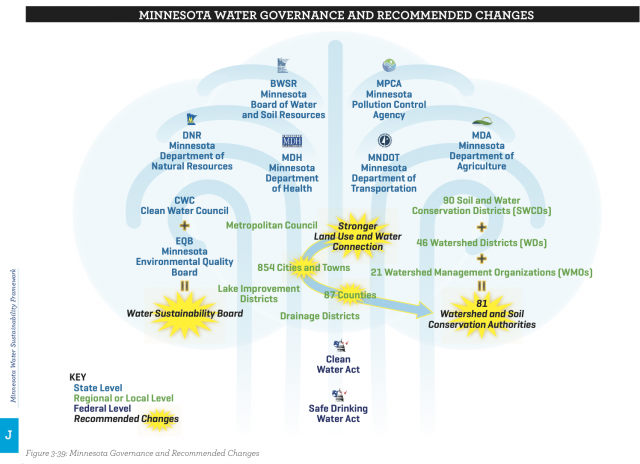 Under these circumstances, I suppose we should be grateful the situation isn’t worse than it is. If you want an idea of how bad it’s getting to be, check our own Minnesota Public Radio’s Beneath the Surface series, which focuses on groundwater (which isn’t really separable from surface water, as the folks around White Bear Lake have learned). Again, I remind you that I come from Massachusetts, where they create water czars and put them in charge of the Water Resources Authority. (Even with a water czar, if they ever try to create another reservoir, I want the job of leading the Environmental Impact Statement preparation. That should be full employment for two lifetimes.)

I hope it’s becoming clear that I have major reservations about whether Minnesota can muddle its way through to better management of our water resources with the institutional arrangements we currently have. I wouldn’t suggest we need to create our own water czar (at least not yet), but I don’t think we’re going to get where we need to go if we just continue to coordinate and collaborate and cooperate until we voluntarily move ahead. Public agencies rarely volunteer to share their “turf”. Furthermore, try to find accountability within the structure shown up above, even if the legislature and the executive approved the proposed changes (over and above the objections of some turf holders). It strikes me as unwieldy and unlikely.

I think we need to pay more attention and watch agency actions carefully as we move ahead with the White Bear Lake issue as a focus, or the Worthington water supply or… I also think it’s time to take into account we’re seeing more and more instances that unlimited growth is not sustainable on a finite planet and even Minnesota’s water resources are finite. Our 10,000+ lakes can float loons and grow fish, but not if we pull the plug by drawing more groundwater than the lakes and rivers need. This is too important to leave to the experts. As Albert Einstein so wisely observed “No problem can be solved from the same level of consciousness that created it.” Some of our experts are the ones who have brought us this Water Supply Plan. As a recovering planner, I recognize a reasonable planning document when I see one. I also remember the old planning dictum “more of the same never solved a problem.” We have a water problem right here in River City, folks.