Is the new Green Line slow? Well, that depends. Where did you start and where did you end?

Bob Collins has a post up on Newscut about his decision to NOT take the Green Line from the 10th Street Station in St Paul (the 2nd stop on the line heading west) to a Twins game (the last two stops on the Blue Line). With four in the car on the 4th of July when there is hardly any traffic between cities, that’s a really easy choice.

Talking about time time it takes to traverse the entire LRT line seems overblown to me since that use case is so limited. Are there really that many people who live at or east of Union Depot in St Paul who want to get to Target Field or points north? I’m sure it happens, but must be a small fraction of all rides, assuming other 22 stations have any popularity at all.

To illustrate this, I used MapMyRun.com to trace out quick estimates of distances between each station on the Green Line and divides them by the scheduled time for a westbound train (weekday, arriving before 9am) to get a feel for how fast the train moves throughout its route. This isn’t a measure of max speed, but average speed between stations: 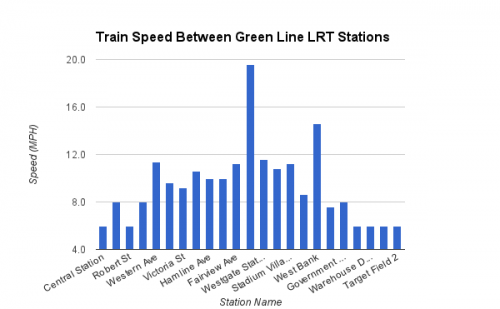 What this tells me is you’ll experience diminishing returns on commute speeds when you’re in the downtown core of either city. This makes sense. We see the same thing any vehicle operating at street level.

This is even more pronounced on the Blue Line, which has higher speeds between stations outside of downtown: 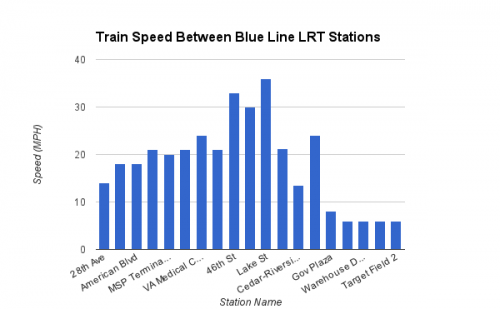 Putting the station speeds of the Green and Blue lines on the same chart helps illustrate how much faster the Blue Line is over most of its route compared to the Green Line. (Northbound Blue vs Westbound Green with the same set of stops once they merge in downtown Minneapolis). 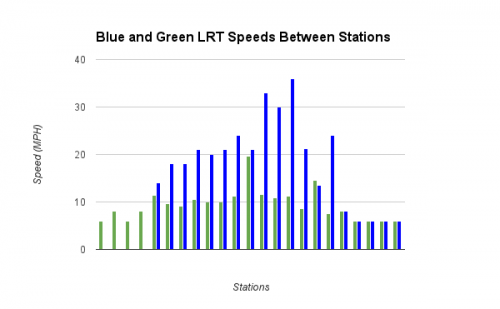 Personally, when I travel on an LRT to downtown Minneapolis, I hop off at “one of the state’s largest corporate welfare projects off all time station”, then hop on a NiceRide for the rest of my trip. That’s much faster than the 6 MPH average speed (10MPH) of either train through downtown. For example, I can NiceRide to Brit’s far faster from Downtown East than taking the train to Nicollet then walking or NiceRiding from there. Google Maps seems to agree with me on this. They estimate 16 minutes for LRT to Nicollet followed by walking: 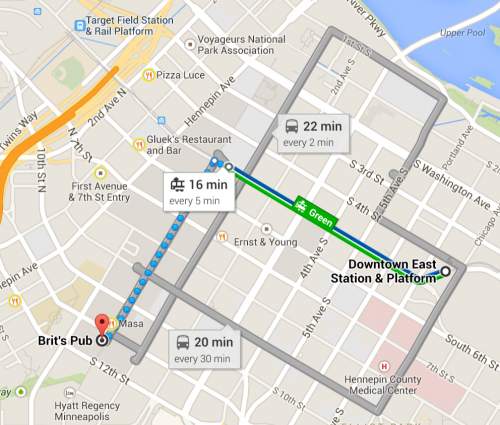 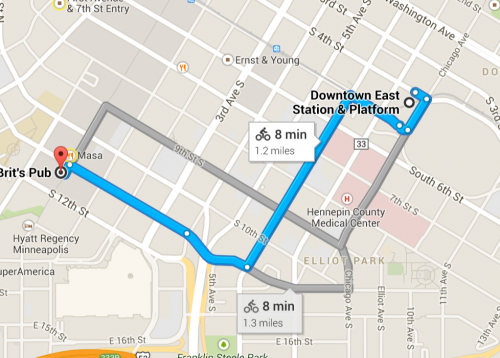 But, the bigger takeaway to me is that trains are painfully slow in downtown cores when they’re built at street level. If they’re above or below ground, they don’t have to compete with everything else going on at street level, which is better for everyone. At this point, I suppose we’re stuck with the decisions we’ve made for the next generation or two. Longer term, perhaps we’ll straighten things out?

And, if I was going to park and ride to Twins or Saints games from the suburbs, I’d probably hop off the Cretin/Vandalia exit of I-94 and ditch my car near The Dubliner. That combined free parking, cutting the LRT trip in half, and provides a cool spot to drown postgame sorrows. That neighborhood is also home to some new craft brewpubs worth checking out, including Bang Brewing. Strategery.