Rather a hot welcome depending on your perspective.

We arrived safely in Israel late Thursday afternoon. Travel was uneventful, thank goodness. Except for the comments from TSA and gate attendants who all felt compelled to remark when the saw our final destination of Tel Aviv. We sort of got a look that said, “Oh.. there… good luck with that.”

Arrival in Israel was remarkably smooth. For some reason I expected there to much more rigor around entering the country. This is my third trip here, and the last two times I recall getting scrutinized in the airport, questions from passport control, customs going through my stuff. This time it was zilch. The long wait we experienced at the immigration desk was not due to vigorous questioning it turned out, rather it was due to the two young ladies in the booth chatting about dates. There you go. Even the line at the customs entrance was due to the bottleneck of getting through the gate.

Flying into Ben Gurion airport for the first time in 30 years or so I was struck by the miles and miles of high-rise offices and apartments in Tel Aviv. From the ground it looked to me like the national tree of Israel has become construction cranes. They were everywhere. Clearly there some positive economic activity going in this country.

Our flight over was pretty empty. By my recollection this was the first empty flight I’ve been on in recent, and not so recent memory. We were on a wide body Airbus 330, the one with the 2-6-2 aisle seat configuration. When I booked our seats the flight was looking full, so I thought. We could have each had a row ourselves. Worked out well for my son who helped himself to an executive bed shortly after takeoff by stretching out across the six seats in the aisle.

I know why the seats were empty; at the moment Israel is probably not high on most folks list of travel destinations, adventure travel aside. We are staying on my cousins Kibbutz in the south of the country, south being where the action is. The Kibbutz is about 20 kilometers or 15 miles or so from the north end of the Gaza strip. As we drove south I found myself scanning the sky for the contrails of incoming rockets or the Iron Dome interceptors shooting them out of the sky. I saw neither. As we continued south we passed signs for Ashdod and Ashkelon, cities very close to the strip who had been getting more than their share attention from Hamas. Mickey was explaining that these rockets are really pretty benign. “They’re basically tubes filled with rocket fuel and very little explosive capability.” “Have you had any hit the Kibbutz?” “We only had sirens twice since this started. We had one hit an old chicken coop, the army did more damage digging the fragments out of the ground when they severed our internet lines, then the actual rocket did.”

The Kibbutz is not an area that’s covered by the Iron Dome. Since these rockets aren’t guided, Hamas really has no good way to aim them, and since there’s a lot of them coming, they only use Iron Dome to protect population centers. We were close to the town of Kiryat Gat, which is covered by Iron Dome, but far enough away that if the trajectory for the rocket was us, chances are it would hit in a field not a house, so no worth and Iron Dome interception.

“You won’t see anything on the Kibbutz:” I was assured. “Besides if something does come near is, it’s because someone in Gaza is a really bad shot.” Not as comforting. And, you’ll hear sirens, if you should hear them, and it’s unlikely, head to the shelter.” Finally, there’s a cease fire for tomorrow morning. Better.

Perfect timing, about a minute later the Israeli civil defense announcer broke into the radio programming, rockets were headed toward Ashkelon. Again I strained to look west to see if I could see anything. Nope.

We arrived to a very warm welcome on the Kibbutz, family I hadn’t seen in years, decades in some cases. 15 minutes after arriving I had a Turkish coffee and pastry in my hand and found myself amazingly content. Tired, but content. After catching up and sharing news we sat out on the porch and continued chatting when I heard a staccato boom, twice and then a third. “Iron dome, from Kirat Gat.” Eerie sound.

After a bit Laura, my cousin, and I took a little walk across the lawn to the small Kibbutz museum. They had a display case of things that had been found around the Kibbutz; Roman jars, oil lamps, a Crusader artifact with a Maltese cross. As we were looking the Kibbutz warning sirens went off.

The Civil Defense system in Israel has be one of the most sophisticated in the world. When rockets are launched from Gaza the system instantly tracks the trajectory of the missile and sounds the warnings where the impact is expected. When the siren sound the sweet elderly lady who spoke very little English but who ran the place went to the middle of the room, got on the ground and covered her head. “Po Po,” here, here she said, patting the ground and indicating that we should do the same. I looked over at Mickey, he was showing Laura some artifacts in the case, looked up and me and whispered, “don’t worry about it.” As I started to kneel down he said to me, “don’t don’t don’t,” nodding his head. It was a little weird, to make the lady happy or listen to the cousin, who by the way handn’t stopped sharing history with my daughter. She was oblivious.

After a few seconds the sirens stopped.

I looked around, “Are we done?” Mickey, without looking up, “Wait for the boom”… and on cue there was a boom.

A BIG boom, and unlike a firecracker, there was a deep resonance that said Big and Close. Mickey looked up from his private lesson with my daughter, “Oo.. that was close!” A minute later there was another siren. The woman dropped to the ground again, Mickey with “don’t don’t don’t” and again the sirens stopped. This time there was no boom.

The rocket had hit a field about 100 yards from we were. The rest of the family had gone to the shelter across the lawn from the house and were coming out about the same time as us. Amazingly everyone was in kind of a jovial mood.

That’s how life is here. Under a constant threat life goes on. People have a little bit of a sense of humor about things. The rocket had ignited a grove of eucalyptus trees where the Kibbutz puts on their picnics, comments were we should thank Hamas for clearing out the brush we hadn’t gotten around to in years. Hitting the grove was one thing, had they hit the pizza parlor.. then we might have to get pissed.

After the excitement settled down we went back eating and chatting and then came the Israeli response; a very low and very substantive booming, like thunder in the distance. Israeli shelling and airstrikes. The booming was frequent and loud. Something serious was up.

Overnight I was pretty sure we’d be running for the shelters again. We were staying in a separate house on the Kibbutz, as part of showing us around were led to the two nearest shelters. If you ehar the siren, just go to shelter. I slept in my shorts.

We did not hear any sirens overnight, we did hear lots more explosions and lots of jet noise.

The weather was fantastic and for a while at least I believed the booming has stopped. When Mickey came by to pick us up I learned overnight the IDF had gone into Gaza. The rockets were less numerous.

We’re getting a very authentic experience here. On the flip side, not a soul at any of the tourist sites we’ve visited. Little bit of a silver lining. 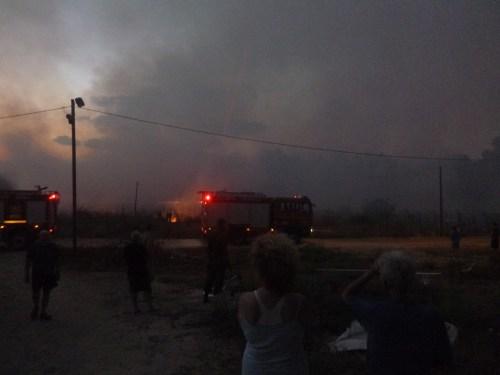