The Republican Party of Minnesota mailed a sample ballot to likely primary voters in targeted areas and failed to list contested primary races in the 1st and 6th Congressional Districts.

Republican Party of Minnesota Chairman Keith Downey sent an e-mail to Republican activists this morning and he apologized “…to the party officers, campaign teams and volunteers working so hard on behalf of” Miller and Emmer.

Last evening, I published pictures of two sample ballots received by Republican activists in the 1st and 6th Congressional Districts and neither mailing mentions any candidates for Congress. Below are the pictures sent to politics.mn. 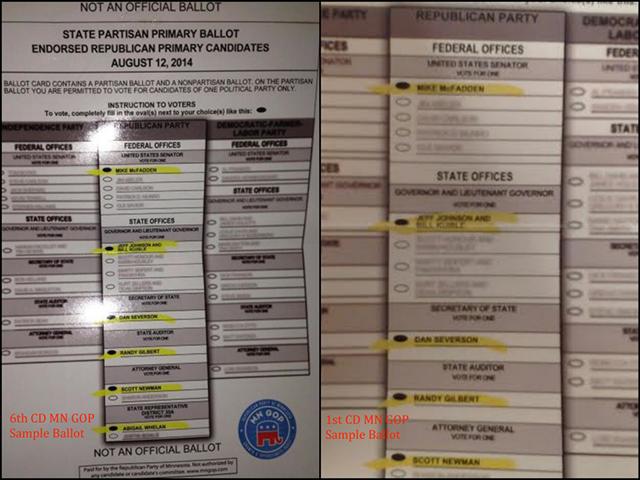 Earlier today, a spokesman for Tom Emmer’s campaign told me they are unaware of Emmer appearing on any sample ballots for the primary distributed by the Republican Party of Minnesota. The design of the sample ballot is bizarre, as the literature doesn’t totally obscure the names of GOP challengers to the endorsed Republican candidates for governor and U.S. Senate.