Jeff Johnson, the Republican endorsed candidate for governor, has spent the last week trying to explain his involvement with Tea Party groups.

Both the candidate and his campaign staff have been unable to articulate a consistent message about Johnson’s documented attendance at Tea Party meetings and him soliciting the support and endorsement from people attending meetings.

This issue was caused by an unforced error by Johnson and his campaign and it shows how unprepared they are for a general election campaign against Dayton and his allies.

Below is a chronology of Johnson’s inconsistent and confusing public statements on his involvement with Tea Party groups in Minnesota:

Johnson asks for support and endorsement from Tea Party members at a meeting:

Johnson says he considers himself a Tea Party member:

Johnson later denies he is a member of the Tea Party:

Johnson then doesn’t deny he is a member of the Tea Party, but says he is not an “extremist”:

Johnson changes his position and now denies being a Tea Party member or asking for their support or endorsement:

The Tea Party is not the only group Johnson associated with as he was seeking the Republican endorsement for governor that has generated negative headlines. Last September, Johnson received bad press for sponsoring an event featuring 9/11 and Sandy Hook conspiracy theorist Ben Swann. 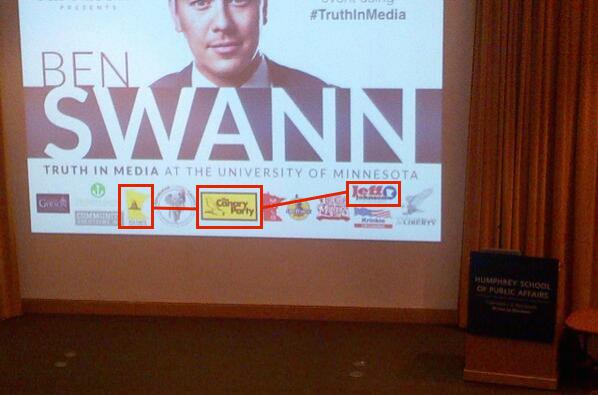 The picture above was taken at the event with Swann on Sepetmber 13, 2013 and provided to politics.mn earlier today. Johnson’s campaign logo appears with other sponsors of the event, which included the Minnesota Tea Party Alliance and the Canary Party. The Canary Party is a fringe anti-vaccination group, which features former Saturday Night Live actor Rob Schneider as one of their prominent supporters.

In response to media inquiries about his sponsorship and attendance at this event, Johnson issued a convoluted statement implying there is no group too extreme for him to meet with as candidate. Specifically, Johnson said:

Bottom Line: Anyone who’s afraid to attend an event because there might be someone present whose views could be considered extreme or offensive is too timid to be governor. You can’t lead when you’re afraid of your own shadow.

Johnson ended his statement by clarifying that he is “not a truther.” Johnson’s campaign received widespread criticism for their sloppy reaction to the controversy and it seems they did not learn any practical lessons from that experience, as the response to Johnson’s Tea Party affiliation has been just as confusing and messy by Johnson and his campaign.

It is clear Johnson’s campaign never thoughtfully planned on how to present and message Johnson as a viable general election candidate after he sought support from groups that Johnson himself said have been labeled as “kind of wacko.” If Johnson’s team knew Tea Party groups have been labeled as “kind of wacko”, why did they not do more to prepare for the scrutiny and criticism?