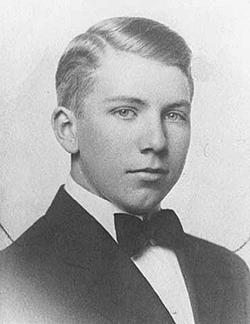 Courtesy of the Minnesota Historical Society
Floyd B. Olson, around 1909.

While reading Floyd Bjornsterne Olson: Minnesota’s Greatest Liberal Governor (1937), a collection of speeches and remembrances published after Olson’s death, I came across the following. As I prepare for the LSAT, I’ve received thousands of tips on what to do before, during, and immediately after law school, but none of it has been as useful as the following. Young lawyers: Take note.

After working a series of odd jobs around the country, in 1913, at the age of 20, Olson returned to Minneapolis and attended night-classes at the Northwestern College of Law (now the William Mitchell College of Law). Two years later he graduated and passed the bar exam. But after doing so, he was sued by his law school over unpaid tuition fees. The trial was recounted by Joseph Poirier, a college friend and later Minneapolis Municipal Judge (1937-1942):

… I recall that one of the first lawsuits Floyd tried was one in which he was a defendant. He was sued by [the] law school for an alleged unpaid balance on his tuition fee. He defended his own case, and I well recall his defense, in which he was Exhibit One as well as defendant. His argument was: “I know nothing about law, have learned nothing; and while I have been admitted to practice, you can readily see that I am no lawyer. My ignorance of the law, and the way I try this case are clear proofs that I have received nothing by reason of my alleged instruction at this school.” And, strange to say, the jury found for him. (32)

I was unable to find the annual tuition cost at Northwesten Law, but I do know it cost $160 (plus a $10 fee) to attend the University of Pennsylvania’s Law School at that time, which would be ~$4,000 in today’s dollars. A century later, according to the American Bar Association, the average debt for private law school graduates is $125,000 — so maybe Floyd’s on to something here.