America! The birthplace* of democracy! In the words of notable non-American, Winston Churchill,

Indeed, it has been said that democracy is the worst form of government except all those other forms that have been tried from time to time.

You’ve got your governments

Here in the good ol’ U.S. of A., we use a form of representative democracy that was cobbled together in the late 1700s to quell Delaware’s (1790 population: 59,096) fears that it would be run roughshod by New York (1790 population – 340,120). So on and so forth, House of Representatives, Senate, you guys probably know the story. Each state gets two senators regardless of population, and representatives are allocated based on population, rounded to the nearest Wyoming (2013 population – 582,658). California gets 53 representatives, North Dakota gets one, and Minnesota gets eight. The president is selected by the electoral college, which is silly.

The setups of state legislatures will vary. In Minnesota, we use a system that’s somewhat different from the federal government. The Minnesota Legislature does have a House of Representatives and a Senate, but both are allocated proportionately by population, and each Senate district has two House districts within it. As of the 2012 redistricting, your average Senate district has slightly less than 80,000 residents and each House district has slightly less than 40,000 residents. The governor is directly elected by a vote of the people. The governor has the power to veto legislation, as well as the ability to mill around for a whole term hoping that maybe he can run for president.

Below the states are counties, and Hennepin County does things like run the Sheriff’s Office, Hennepin County Medical Center, transportation planning & maintenance, libraries, andincineration. There are seven county commissioners, each representing a district with something like 170,000 residents. The county commission has a chairperson, but not an actual executive like over in Wisconsin.

Then there are cities which, like states, also have lots of different setups. In Minneapolis, we have a “weak mayor-council” system, where the mayor doesn’t really have much formal power other than the ability to nominate department heads and propose a budget. The mayor is directly elected by a vote of the people or maybe, now, kind of indirectly with ranked choice voting. Most of the power in Minneapolis’ city government lies with the City Council. There are 13 City Council wards, allocated proportionately by population. As of the2012 redistricting, your average Minneapolis City Council ward has 29,429 residents. The City Council is directly elected by a vote of the people in each ward, and at times City Councilmembers have been referred to as “mayors” of their wards. The City Council passes legislation with or without the mayor’s consent.

You’ve got your populations

The Twin Cities metropolitan area has grown quite a bit since the suburbs started sprawling in earnest after World War II. Due to different measures of what a metropolitan area is, the fast-growing physical area of the metropolitan region, and the increasingly blurry line between urban and rural, it’s a little hard to throw together direct comparisons. Looking at 1950 census data for Minneapolis, Ramsey County, and a few first ring suburbs like St. Louis Park and Richfield, you get a population a bit north of one million people, a little over a third of the state total at that time. Today’s official 13 (!) county Minneapolis-St. Paul metropolitan area counts 3.45 million residents and stretches from the New Prague Pizza Ranch to the Cambridge Taco John’s. By any measure, the metro area’s share of state population has certainly increased, and a clear majority of Minnesotans now live in the urbanized area of the Twin Cities metro.

Because of the way we split things up by population to allocate our representatives, population and population growth matter a lot. Nationally, we see this when states lose seats in the House of Representatives to other states that are growing faster. Locally, the changes can be specific and dramatic. Looking at the State of Minnesota, Hennepin County, and the City of Minneapolis from 1950 to the present, it’s clear that there have been major population shifts. Minneapolis falls steadily as a share of the other two from 1950 to 2010, and then we edge up just a smidge in the 2013 American Community Survey.

You’ve got your maps

To tie this all together, I spent an evening at the Borchert Map Library at the University of Minnesota looking for old maps of state legislative districts, county commissioner districts, and city council wards. Major shoutout to the extremely helpful staff at the library. The more recent maps are from the Minnesota Legislature, Hennepin County, and City of Minneapolis websites.

And look at how these maps get drawn!

You can click the arrows in the bottom right corner of each graphic to blow them up to a larger size.

First, we can look at state legislative districts.

In 1967, Minneapolis had nine state Senators. The year before, we stopped adding more total representatives to account for population growth, and the state has been fixed at 67 Senators since then. Today, Minneapolis has four and a half or so state Senators–District 63 is split between Minneapolis and Richfield.

Counting St. Paul’s six state Senators in 1967, the two Twin Cities alone accounted for over a fifth of the total Senate. Which isn’t to draw any conclusions about conservative and liberal politics–since the 1950s, the legislature has grown more reliably Democratic as it’s gotten less authentically urban. And, of course, there used to be a much more active Republican party in the core cities, though it’s unclear how party identification really translates across decades at this point anyway. Today, the two cities have seven or so Senators, and fourteen or so House members, and we can’t even get all of them on board with increasing the gas tax.

Second, we can look at Hennepin County to see a sort of similar effect on a smaller scale. Fun fact: After much effort, I was only able to find these on the back of county highway maps, so that’s something.

Hennepin County! Secretly very important. In the 1970s, two seats were added to the county commission. The impacts of population growth are clear on these maps–in 1978, six of seven commissioners were accountable to at least some Minneapolis voters, but in 2014, only three of seven are–but the impact is less clear, because the districts have historically been drawn in very bizarre ways. They make more sense now, though District 3 is still a bit of an outlier there. When you know where the population density is, that 1971 map looks a bit like the example you’d use to explain gerrymandering to a junior high civics class.

In any case, you can see the center of population in Hennepin County drifting westward very clearly.

Lastly, we’ll look at the City of Minneapolis’ ward maps.

One thing you’ll notice quickly is that I-94 has not (!) always been there, but also, generally speaking, south of Lake Street and north of Lowry, there’s a decent amount of continuity throughout the decades, but everything in the middle basically swirls like a maelstrom. Wards like 1, 4, 12, and 13 have been fairly static (though the numbers have changed) and, curiously, Ward 3 has strode between both sides of the river for over seventy years, though it has moved south.

It’s hard to pick out obvious constituencies for every ward on each map, and it would be impossible to draw them that way in the first place anyway. During the 2012 redistricting, there were specific efforts made to concentrate different ethnic groups (namely, Somali-Americans) into wards to increase the likelihood that a candidate from those ethnic groups that would be elected. Subsequently, we elected our first City Councilmembers of Somali, Hmong, and Hispanic heritage. 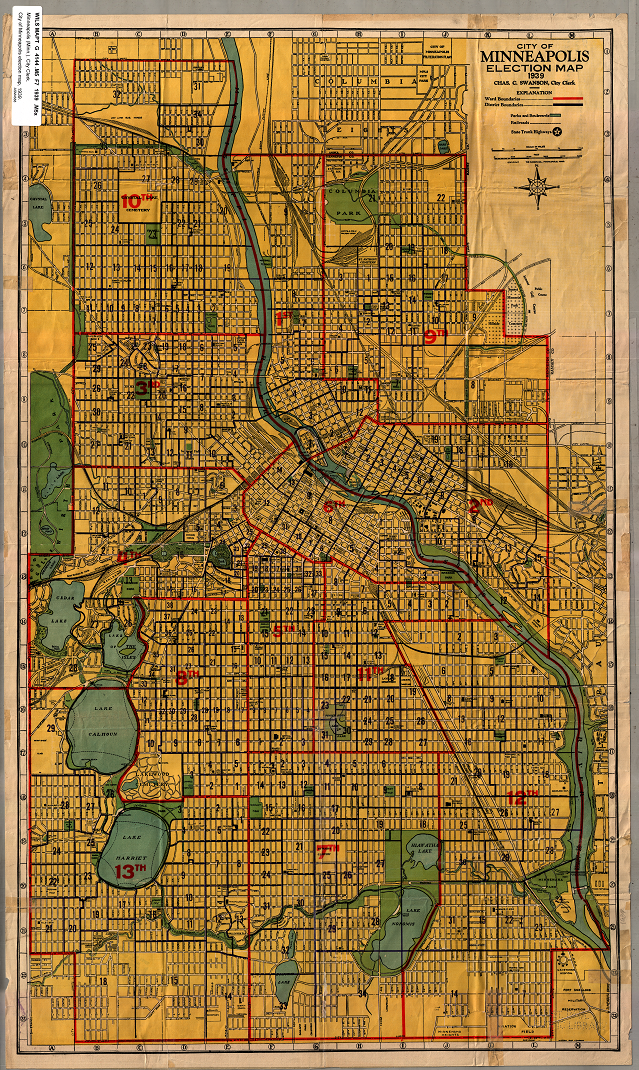 This is maybe one of the more logical-looking maps. The population differences are really clear. On the present day map, only Ward 6 appears that much noticeably smaller than the others, but there’s lots of variation here. The southern part of the city hasn’t even filled in yet. This is something we could potentially be moving back towards–clearly, population growth is concentrated in specific areas, and representation will need to adjust accordingly. A ward for LHENA, Whittier, and Stevens Square in 2021? It’s possible. Similarly, density has increased drastically around the University of Minnesota in the past five years–a ward trying to accommodate that will need to have its borders hemmed in quite a bit.

Practically, this all is important for lots of reasons. The same arguments about density generally are applicable to these wards — if Ward 13 in Southwest Minneapolis has more roadway to maintain than three combined wards in other parts of the city, that may well lead to tensions. More broadly, it would be nice to get some more state representation, especially considering Minneapolis’ role in powering the state economy, ourdisproportionately high contributions to the state, and blocks and blocks of nontaxableregional amenities. It may seem silly to view the Controversial Apartment Project of the Month as a means to getting more for our money’s worth from Hennepin County or the State of Minnesota, but it just might be our best shot at doing so. The city is filling back up, and as a result we’re heading to a better place politically.

The political implications of population growth