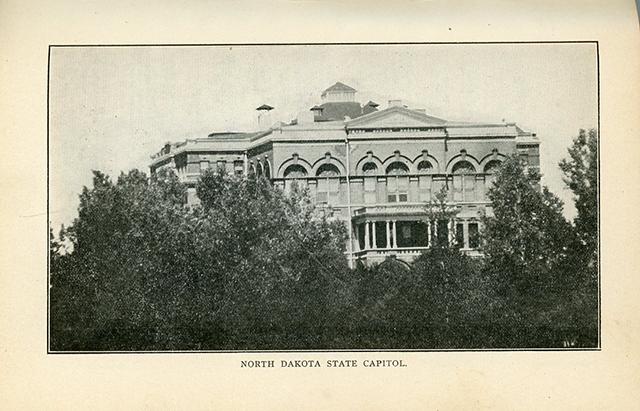 North Dakota is my home state. Many North Dakota towns and cities have earlier celebrated their 125th. Sykeston, where I graduated from high school in 1958, celebrated its 125th in 2008.

Some serendipity happenings cause me to give focus, this day, to the original Constitution of the State of North Dakota. (History of the North Dakota State Capitol buildings can be read here. The original building was built in 1883-84, burned down in 1930, and was replaced by the present skyscraper of the prairie in 1934.)

Most of the text and illustrations which follow come from the 1911 Blue Book of North Dakota, which I found this summer amongst the belongings at theLaMoure County farm where my mother grew up. In the books illustrations (below) you see evidence of pencil scrigglings. Most likely, they were made by my then-two year old mother, Esther: she was born in 1909, and by the time this book was at the farm home, she was probably at the age where a pencil and paper had some relationship together. (The final picture, at the end of this post, is of the first page of the book. Likely an Esther Busch original!) 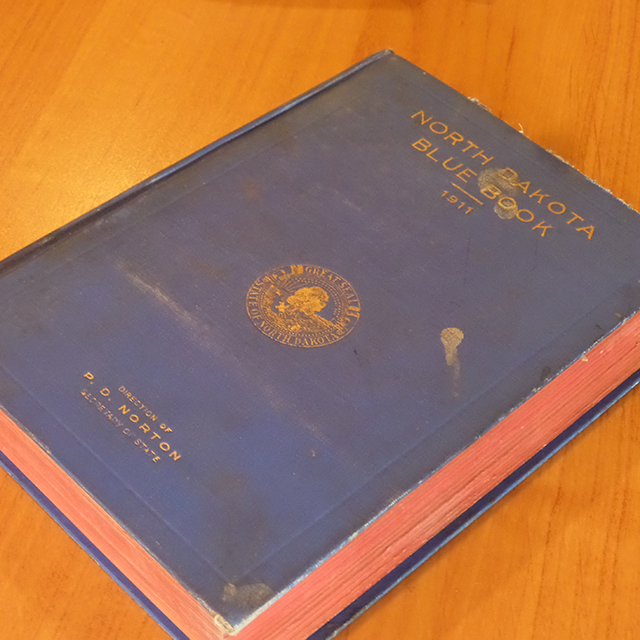 Courtesy of Dick Bernard
The cover of the “red, white and blue” Blue Book of North Dakota, 1911

The official story of the history of North Dakota, as told in 77 pages of the text of the 1911 ND Blue Book is accessible as follows:

North Dakota’s history, like all places, then to now, is complex.

For anyone interested there are a great many sources and observations interpreting North Dakota’s early history and the torturous course of its Constitution pre and post 1911. Between statehood in 1889 and 1911, when this book was published, there had been great changes in ND, with extremely rapid growth. It was doubtless an exciting time on the prairie; a time of transition.

Elwyn Robinson, author of the definitive history of North Dakota, gives this description of the beginnings of the ND Constitution Convention in 1889: ND Constit – Robinson001.

Complex as it was, it seems that the ND process was very civilized compared with the earlier Constitution deliberations leading to Minnesota statehood in 1858. Secretary of State Mark Ritchie, in the 2009 Minnesota Blue Book, has this account of the Minnesota Constitution Convention: MN Constitution Hist001

Of course Constitution history does not end with enactment. Re North Dakota, Dr. Jerome Tweton much later wrote an interesting commentary on a later effort to redo the oft amended original Constitution of North Dakota.

The rest of us

Of course, such recountings as shared above, tend to overlook the ordinary human element – people like ourselves. The recounting is of power transactions, in the old days, virtually all made by educated white men, setting the ground rules for the society in which they lived.

Here, very briefly, are snippets of four human stories, those of my grandparents.

The person who acquired and then saved the 1911 Blue Book was my grandfather Ferdinand W. Busch.

He and his wife, Grandma Rosa (Berning), came to the pioneer farm between Berlin and Grand Rapids from extreme southwest Wisconsin (a few miles from Dubuque IA). They married Feb. 28, 1905, and the next month came west to virgin prairie.

Grandpa Fred Busch seems always to have had an active interest in politics, and it is probably thanks to him that I now have this precious old book. (Rosa would have little of this political stuff: there were mouths to feed, after all. When Grandpa ran unsucessfully for County Auditor in 1927, my Aunt Mary once said, Grandma, now with the franchise, campaigned against him!)

Their farm was purchased from the father of Milton R. Young, long time ND U.S. Senator. Fred knew Milton well, personally. They are buried, literally, across the road from each other just outside of Berlin. My mother worked at one point for Milton and his wife at their farm on the edge of Berlin.

Dad’s side of my family preceded ND statehood.

My grandmother Bernard, then Josephine Collette, was born eight years before statehood at St. Andrews, where the Park and Red Rivers come together in Walsh County ND. Her parents came to ND in 1878; several uncles and Aunts came west about the same time, just before the great land rush.

Her uncle, Samuel Collette, who migrated to the St. Paul MN area from Quebec in 1857, was the first family member to see North Dakota. He was part of the Minnesota Mounted Rangers in 1862-63, a soldier in the so-calledIndian War, and likely was with that unit in 1863 when it reached what later became Bismarck. This was a few years before Interstate 94.

In the reverential description of the ND flag in the book (see below), I found most interesting the many references to the Spanish-American War in the Philippines 1898-99.

Grandpa Busch, Mom’s Dad, would not, in 1911, have had any idea that his future brother-in-law, my Grandpa Bernard, Dad’s Dad, who came to Grafton from Quebec about 1894, was in at the beginning of that long war, spending an entire year in the Philippines, part of Co C, Grafton.

Where that ND flag was, there was Grandpa Bernard.

I have visited Manila, Pagsanjan and Paete, all mentioned in that description.

North Dakota was one of the earliest enrollees to support that war in the spring of 1898. Of course, the “Roughrider”, Teddy Roosevelt, had spent two important years in ND in the mid 1880s, living in the Badlands not far from todays Medora. In a way, by 1898, Theodore Roosevelt had become a North Dakotan.

Without knowing it, the two ND families were already “tied” together.

(Another book found at the Busch farm is one about the Spanish-American War written at the time of the war in the grandiose style of the time.)

Every family has their own stories. These are only five small snips.

And every state has its symbols

Here are the 1911 descriptors of the Wild Prairie Rose, North Dakota’s State Flower, and the North Dakota Flag: ND Flower Flag 1911 002. These are the only state symbols within the book. 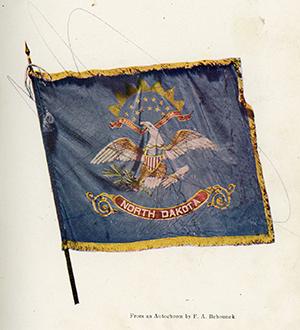 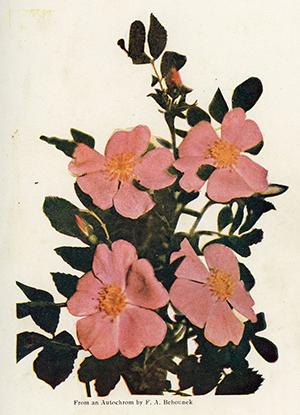 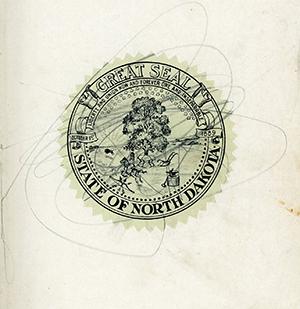 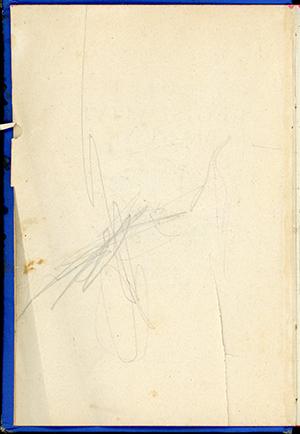 There is no descriptor of the North Dakota Seal in the 1911 book. Here is a more current interpretation of that Seal.

That more or less remained the population of North Dakota until the recent oil boom.