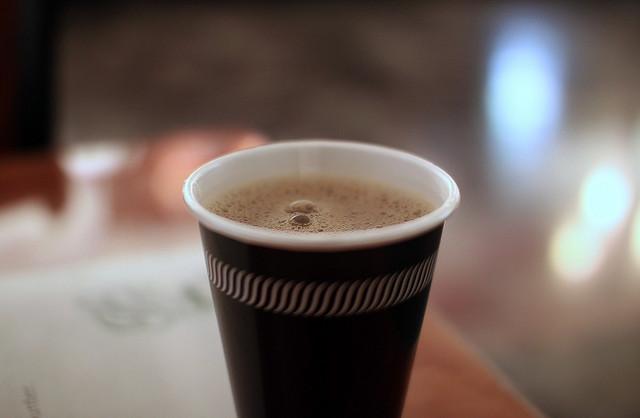 This post is not just about coffee, but it will start out with a discussion on coffee. Let me begin by telling you that I do not currently drink coffee. Three years ago, I tried it for a week. I liked the first few cups, but then stopped. I try and limit my daily caffeine intake and my favorite soda is Caffeine-Free Coca-Cola.

When I meet someone at a coffee shop for a meeting, I’ll buy fruit juice, a smoothie, or maybe a small hot chocolate. I have never once felt peer pressure to buy coffee at a coffee shop. I do not drink coffee, so I will not buy it.

But then it was brought to my attention that a prominent supporter of Johnson, who owns a coffee shop, responded by saying Croman’s tweet was “false.”  A follow-up tweet by this person said they believed Johnson “…recently started drinking coffee.”

I became a bit more interested in this silly debate about coffee and I sent out a tweet about the confusion related to Johnson’s coffee consumption. A reporter for the Star Tribune responded to my tweet by stating Johnson has been seen buying coffee to support a coffee shop, but will then throw away the full cup of coffee, because he does not drink coffee.

I started to think for a few minutes about Johnson’s documented practice of buying coffee and then throwing the full cup of coffee away. The visual of Johnson sheepishly standing at the counter and asking a barista for a cup of coffee he knows he does not want, nor will he drink, perfectly encapsulates the problem with Johnson’s candidacy.

As a candidate, Johnson wants to be everything to everyone, and the level to which he will go to win support from a voter includes pretending he will drink the coffee he orders at a coffee shop. It is bizarre and I have never heard of a candidate creating confusion about whether they drink coffee or masquerading themselves as a coffee drinker.

The confusion Johnson has created about his coffee consumption extends to the double-talk and inconsistent stances he has taken on multiple issues during his campaign for governor.

Leading up to the Republican State Convention, Johnson claimed he would be a “scrappy fighter”, but after the convention he continually told the media he was the “nice guy” in the race for governor.

Johnson openly courted the support of Tea Party groups and asked for their endorsement, but then denied doing it. Johnson claimed he would not raise taxes as governor, but then said he would consider new taxes on goods and services, including clothing.

Johnson and his campaign staff have said he would not cut the current minimum wage, but he also said he would a sign bill to reduce the minimum wage. Johnson said he “would love to repeal MNsure”, but Johnson later said “I don’t think we should eliminate MNsure.”

At numerous Republican and Tea Party events, Johnson discussed his position on education. But later in a speech to school officials, Johnson acknowledged many of the reforms he is promoting as a candidate for governor is “probably not the direction we’re going to be going anytime in the near future in Minnesota.”

After supporting the purchase of a cellular exploitation device in Hennepin County called Kingfish, Johnson later said he did not support the purchase of KingFish “today”, but also did nothing to stop the use of the device.

On the issue of sex offenders, Johnson explained his position with such confusing language, I have yet to figure out what he would do if elected governor. Johnson has said Minnesota has a strong economy, but in a recent fundraising solicitation, Johnson called Minnesota’s economy is “weak.”

Just today we have another example of Johnson’s “buy the coffee, but then throw it away” messaging style that has tripped up his campaign from the beginning. Last week, Johnson said in an interview with Blois Olson that he was “fine either way” if Independence Party candidate Hannah Nicollet participated in the upcoming gubernatorial debates. But Johnson’s campaign later insisted that Nicollet not be allowed to participate in a debate tomorrow.

I could have included more examples, but by now you understand my point. Johnson either does not know who he is, or he is so uncomfortable with himself that he has pretend he is a coffee drinker. If Johnson feels pressured in a coffee shop to order a cup of coffee — something he does not drink and will later just throw it away — I do not understand how he is prepared for the pressure of serving as governor.