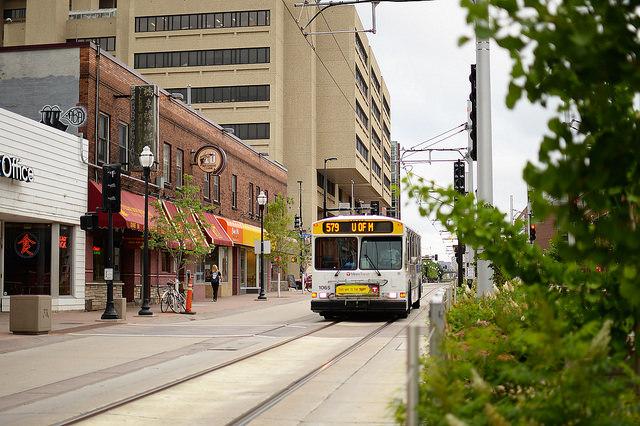 Courtesy of Metro Transit/Eric Wheeler
There are limits to the areas in the metro region that can reasonably be served by transit.

Earlier this week, the Star Tribune published a dynamite survey of the transit usage of the 17 members of the Metropolitan Council. As it turns out, not many of them use transit particularly often.

The Metropolitan Council, established by the Minnesota Legislature in 1967, is charged with things like land use planning, transportation planning, and sewage treatment in the seven county metropolitan area. In 1967, seven counties was a fairly broad interpretation of the Twin Cities metropolitan area, but in 2014, the Census Bureau now counts 13 counties, stretching from the Wisconsin side of Lake Pepin to Munsinger Gardens in St. Cloud.

Notably, the Metropolitan Council is also objectively, obviously, a good idea. Transportation, land use planning, and wastewater treatment are things that should be done regionally. Controversially, they are not elected, but appointed by the governor, and this is frequently pointed out by people who belong to whatever political party the current governor does not belong to. Maybe they should be elected, but already, no one knows who their county commissioner is, and given the way everything everywhere has become face-meltingly partisan in the past decade, maybe we don’t need another election generating terrible attack ad junk mail. What Soil and Water Conservation District are you in, anyway?

The survey and the results and subsequent analysis generated lots of debate, and I was actually kind of surprised how many smart people quickly dismissed the notion that these leaders need to take transit in order to plan and manage it. And, I mean, the 17 councilmembers aren’t really “planning” our transit, it’s much more complicated than that, but I would imagine we would get very similar results if we polled county commissioners (counties, generally, have selected routes before handing them off to the Metropolitan Council) or people who work in Public Works departments across the metro area, or really any other influential group around the Twin Cities. One time, I did see my state representative (Chair of the House Transportation Finance Committee!) on the 6 during off-peak hours, and he didn’t look like he wanted any credit for it, so that’s good. According to the StarTribune survey, many senior staff folks at Metro Transit do take transit regularly, with their General Manager Brian Lamb leading the pack with hundreds of rides this year, and they should be credited for that.

But, I dunno, it does seem like it’s sort of important to take the bus in order to understand the bus, right? I guess there are probably bald people who are great hairdressers. But transit is even more complicated than hair, and many of the longform answers in the survey betray a lack of understanding of what mass transit actually is, and how people use it on a daily basis as a way to get around in their lives. A stronger analogy: Imagine an office (totally hypothetical and not real at all) where the highly-used shared copier was an absolute nightmare, but the people in charge of buying a new copier did not regularly use the copier. They might have trouble fully grasping the situation…with the copier.

On Wednesday, I took the Route 7 bus to Minneapolis Animal Care and Control to look at a cat (I found a cat) and there are also people who use transit to do equally important things, like, for example, all of the things in their lives. Transit isn’t just something you drive to so that you can save four dollars a day on parking downtown.

Also, this is a pretty good quote:

“The nature of my two jobs is that I am all over the metro area for meetings and am often unable to include the additional time needed for transit in my schedule, which limits my usage,” Haigh said.

There’s that. Don’t wanna pick on her too much, but she sort of lives in St. Paul and those two jobs, TC Habitat for Humanity President & Chairperson of the Metropolitan Council, are sort of located…on the Green Line.

Anyway, our existing rail transit is okay enough, but the day-to-day experience on many local route buses is not very fun. These are the routes make up the vast majority of the rides in our system–the Route 5, 18, 21, 22, and so on. Every day, thousands of people move along Nicollet Mall on buses at walking speed for the amount of time it would take a person in a car to drive from Downtown Minneapolis to Wayzata, except they’re only covering about 12 blocks. And that’s fairly simple to grasp in the abstract: transit service not of very high quality, okay, got it. But it’s more personal when you experience, firsthand, a full bus running drop off only skipping you while you’re at a bus stop trying to get to class. Or waiting out by one of many thousands of sad, lonesome bus stop sign poles in the dark in the winter. Or when you see (I certainly can’t grasp the actual experience) a disabled person trying to get on a bus on Nicollet Mall during rush hour. Or many other things.

What it really gets down to is land use. People don’t understand what land use is, and if you don’t understand land use, your transit and transportation in general will be forever terrible. Like even lots of really smart people with MBAs and BMWs don’t get it. Hundreds of thousands of people in our metro area sit in traffic by themselves for hours (!) listening to talk radio and don’t stop for a second to think that that is anything other than the default way that the world is, and in fact get extremely agitated and emotional over even considering that there are other options–check out the comments on the survey. 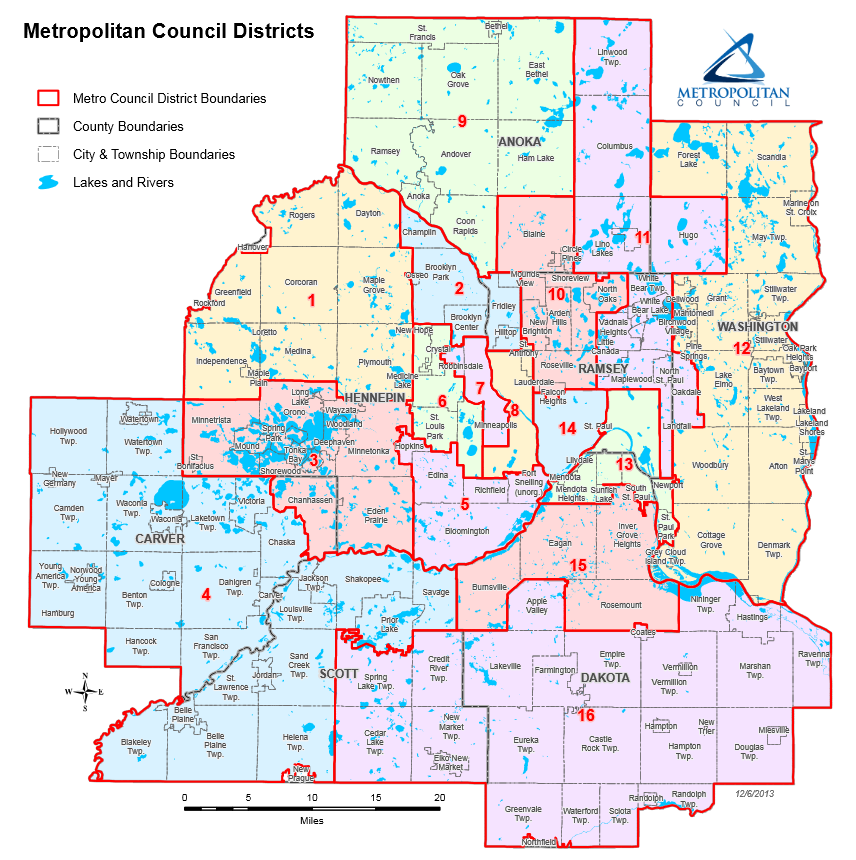 So there’s a map of all of the 16 districts (the Chair, Ms. Haigh, is a floater) and, I mean, look at that. To be honest, I sure as hell wouldn’t blow billions of dollars trying to pretend that we can ever adequately provide transit service to everyone on even just the middle 50% of that area. We can’t even do that. People and their employment aren’t just spread out (and spread out they are) but they’re spread out in the landscape in a way that’s fundamentally impossible to serve at a reasonable cost.

Minneapolis and St. Paul (and some first ring suburbs) have the land use pattern that makes transit work–gridded, walkable streets; dense, walkable employment centers; dense, walkable retail centers; and many areas with at least medium residential density. A secret: Most of Minneapolis and St. Paul are basically suburban. But they’re easily infillable and can be redeveloped into areas that support transit investments–if that’s your goal. A good goal would also be to serve the people who are already using it, but serve them better and encourage higher use of the routes that already seem to work.

The second ring suburbs and beyond aren’t really like that. These places were intentionally built for cars and cars alone. The windswept parking lots and eight lane arterials and never ending cul-de-sacs and beige vinyl siding will be hard to change. But barring some sort of catastrophe, this is the metro area we have in 2014 and will continue to have for decades. If trends (gas more expensive, people poorer, Chili’s less cool) continue, there may not be a Plymouth where Independence is in 2040, but Plymouth will still be there. And because the land use in Plymouth is so fundamentally different from the land use in even St. Louis Park, not to mention Minneapolis, it’s hard to imagine too many ways to serve people in Plymouth that make any sense, other than express buses to Downtown Minneapolis.

I, personally, am not really on team “get rid of all the cars,” but as a thought experiment that’s the direction you should be headed in when thinking about transit–are we building transit so that a small number of people in a relatively affluent area can use it for a segment of one trip at the expense of other peoples’ entire multiple trips? Are we building transit as a handout to the construction industry? Are we building transit so that we can say we built transit, throw some colored lines on a map, and show it to our friends in other cities? So maybe we shouldn’t have folks planning transit who live in areas that can’t support it in a reasonably effective way. We’d probably have to stop taking their money, of course, but the rush to get more counties in the transit sales tax tent has led to some rather dubious investments. The Metropolitan Council is a good idea and should stick around regardless, but maybe there’s a better way to arrange representation, or committee assignments, or something.

In any case, for now, everyone on the Metropolitan Council should be compelled (obligated?) to take transit, if only as an annual adventure. Go stand at Nicollet and 7th in February with a stroller, or even pretend you’re trying to get between two jobs. And not just the Metropolitan Council, everyone in the Twin Cities metro area in a position of influence over this system should probably get in on it. County commissioners, city councilmembers, state representatives, the whole gang. And not the train; take a bus somewhere. If you’re going to put anything about mass transit on your campaign literature or in your bio, you should back it up with some action.

The Met Council is a great idea, but the full council shouldn’t plan transit