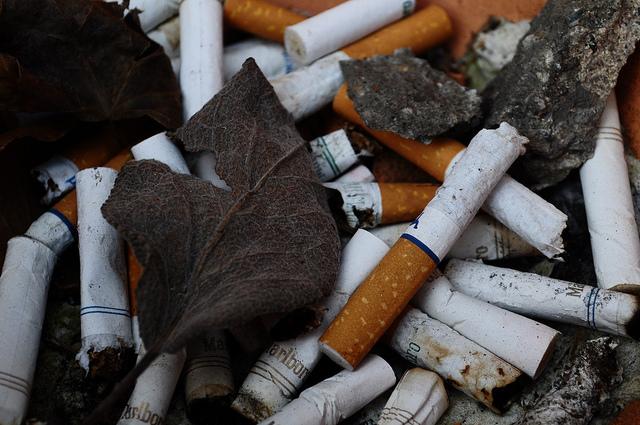 Our recent blog post discussing one example of the unintended consequences of trying to modify personal behavior through the tax code made us wonder how Minnesota’s own big experiment along those lines was working out: our major increase in cigarette taxation.

As you may remember, policymakers increased both cigarette excise and wholesale taxes during the 2013 legislative session. The new combined excise/wholesale rates more than doubled the old rates and were projected to bring in approximately $400 million in additional general fund revenue. Yet many claimed the new revenues — so essential to balancing the FY 2014-15 budget — were a byproduct of the real policy motivation: getting people to stop smoking. Whether you believe such claims were sincere, disingenuous, or a little of both, the fact is this decision was based on the win/win proposition of being able to raise considerable general fund revenue and achieve a social purpose at the same time.

How has this all turned out? According to MMB, net cigarette and tobacco tax collections were $607.1 million in the first year after the rate hikes, exceeding revenue forecasts by nearly $14 million. For perspective, that’s about half of Minnesota’s corporate income tax collections that year. Yet, over this same period the Department of Revenue estimates cigarette pack sales in Minnesota declined by nearly 30% from roughly 227 million in FY 2013 to about 163 million in FY 2014. From these indications, things seem to be going according to plan.

But adjustments to higher levels of taxation can take time, and there is evidence to suggest that the behaviors behind these numbers are more complicated than they may seem. For starters, collections over the first three months of the current fiscal year (FY 2015) are now trailing projections by nearly $17 million, or 13%. Although some of this might be attributable to a downtick in usage (from 19% of adults in 2011 to 18% of adults in 2013 according to the CDC), it also appears many Minnesotans have gotten more resourceful in maintaining their habit.

Then there is this rather remarkable finding from a recent report that came across our desk that was funded by a group of cigarette wholesalers and retailers. It examines the economic consequences of the 2013 cigarette tax increase and suggests that while cigarette consumption may have staying power, Minnesota’s cigarette tax collections may not. According to the report, based on store-level data, per capita cigarette sales in Minnesota border regions, already feeling the effects of existing border differentials, “collapsed” with the increase — down 42% along the North Dakota and Iowa borders, 35% along the South Dakota border and 27% along the Wisconsin border. Meanwhile, border state sales in counties near several larger Minnesota cities increased over 60%. We’ve reproduced a figure from the study below that shows this change. 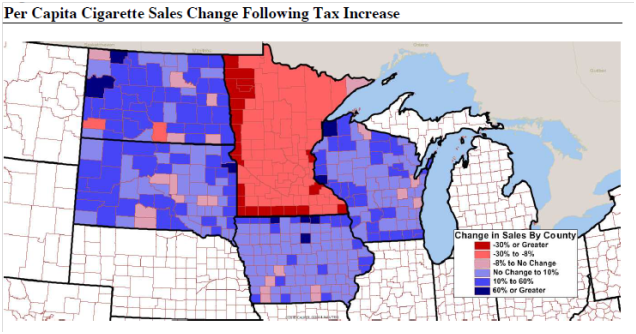 Even Minnesota’s interior “pink” region — featuring per capita sales declines of 8%- 30% — may entail a much more complicated narrative. As the report notes, consumers have many alternative sources to more traditional outlets for cigarettes and tobacco products, including overseas counterfeit vendors, Native American smoke shops (where the tax issue has been problematic for decades), and illegal smuggling which the Department of Revenue has called “the obvious wild card.”

Trends in tax avoidance and resulting shortfalls in projected revenues may get worse over time because of a unique and controversial policy feature. Minnesota is the only state in the nation that annually adjusts its per pack excise tax (now at $2.83) for inflation. Tax experts generally regard automatic inflation adjustments as bad tax policy save for those very rare “benefits tax” situations in which revenues directly and exclusively finance the costs of the service provided (like a gas tax.) Minnesota has essentially decoupled cigarette taxes from efforts to pay for the public costs associated with smoking. Only about 5% of cigarette tax collections are now dedicated to paying for health-related programs – the rest fund general government operations.

Which in turn raises a bigger set of tax questions. How wise is it to support the general obligations of government by increasing reliance on a revenue source that is not only volatile and avoidable but also intended to decline over time? And even if cigarette revenues do prove to have greater staying power despite the increasingly challenging economics and abundant opportunities for avoidance, shouldn’t important general fund programs like education be paid for with broad-based general taxes on society rather than being foisted upon a disproportionately poor minority of its citizens? Collecting significant revenues for the benefit of all at the expense of a marginalized minority because the political cost is low in some ways redefines the concept of what a “sin tax” is.