Back in 2009, the Budget Trends Study Commission painted a grim picture of a Minnesota fiscal future utterly dominated by one spending area: health and human services. The report highlighted historical rates of growth, demographic pressures feeding that growth, and concluded that if historical trends persisted, “in order to achieve balanced budgets over the 25 year time horizon, expenditures on all other segments of the budget, including K-12 education, would have to remain essentially flat.” New information suggests this vision is not a visit from the Ghost of Fiscal Future; it’s unfolding right before our eyes today.

The annual release of Census data on state and local government finances provides information on Minnesota’s tax collections, spending levels, and spending priorities, which enable comparisons to other states. But some of the best insights come from examining the information for an individual state to see how tax collections and spending patterns have evolved. We have been publishing our summary of this Census data, How Does Minnesota Compare, for nearly 50 years and after looking back over many years one thing has jumped out at us as reflected in the table below: 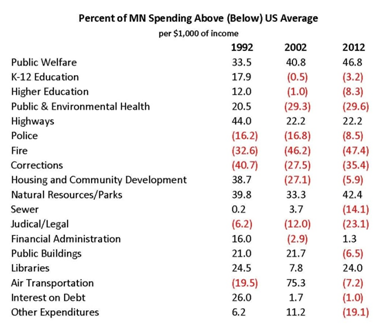 Many would be quick to attribute this trend to the practice/philosophy of tax cuts followed by tax restraints that marked the period 1992-2012. It’s undoubtedly a contributing factor.  According to the latest Census figures, total state and local tax collections per $1,000 of income in Minnesota in 2012 were 9.9% above the national average,  down from 13.3% above the national average in 1992.  However, its difficult to attribute this trend and the magnitude of the changes entirely to the modest relative change in tax collections.

That suggests something else – something very powerful – is at work, and the first category of spending in the table suggests what the culprit is.

The Census Bureau defines “public welfare” spending as “support of and assistance to needy persons contingent upon their need.” This category includes a wide variety of programs and expenditures for low income households, the disabled, and – above all – the elderly. It includes payments to health care providers for medical care, support of private and public welfare agencies and organizations, and cash assistance to needy individuals and households – in short what we might more generally call “human services.” Minnesota has long been recognized as a state that looks after its most needy and disadvantaged. It’s part of our ethic, it’s generated many excellent returns, and it’s a hallmark of being a great state.

But the crowding-out effects on other government services that are also critical to our success are very real. Consider this:

No spending which grows some 50% faster than income or taxes over time is sustainable – especially a spending area of this magnitude. And perhaps most disturbing of all: the full force and fiscal impact of the “silver tsunami” is still years ahead.

Lots of questions deserve to be asked. How much of the growth is driven by demographics? Does Minnesota have substantially more generous programs? A broader scope of programs? Greater eligibility? What opportunities are there to streamline bureaucracy, consolidate programs, and otherwise improve the cost efficiency of program management? Efforts are being pursued, but answering these questions is difficult because the complexity of spending in these areas perhaps rivals only the property tax system in terms of general incomprehension.

The warnings of the Budget Trends Commission are playing out before our eyes. It would seem program benchmarking and other assessments need to be done, and soon, for the sake of taxpayers, beneficiaries of these programs, and the rest of government.