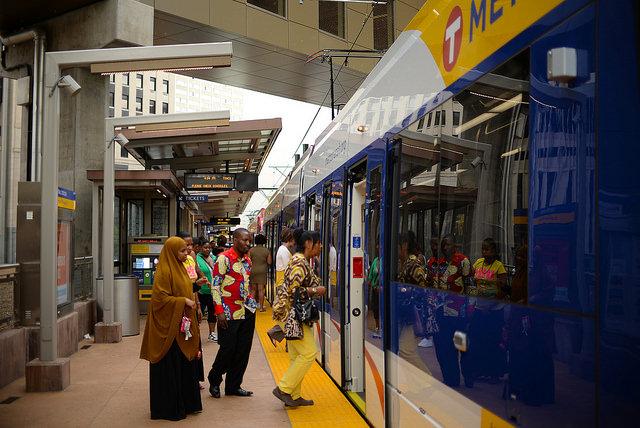 Courtesy of Metro Transit/Eric Wheeler
Improved transit services might make it possible to downsize from two cars to one, or even from one car to none if we live in an area well served by efficient transit.

The legislature is buzzing with transportation funding proposals. The Republican plan proposes no new revenue streams while the DFL plan contains a variety of tax and fee increases to pay for system fixes and expansion.

One point of contention is the DFL’s proposed one percent metro area sales tax to raise money for transit. Republicans and allies like the Minnesota Jobs Coalition balk at the idea, claiming it will put undue pressure on the middle class.

But a one percent sales tax could actually save many middle class metro residents hundreds or thousands of dollars a year and improve everyone’s quality of life.

I think about paying taxes to fund transit (or anything, really) like paying for any other good or service – we should consider what we get for our investment. What does a one percent sales tax cost the average metro citizen and what does that citizen receive in return?

A possible map of our future transit system, only possible in an “Increased Revenue Scenario” according to the Met Council’s 2040 Transportation Policy Plan.

The DFL plan will cost each metro-area resident an average $90 per year, not a totally insignificant amount of money. So what do we get for it? We get improved transit services that might make it possible to downsize from two cars to one, or even from one car to none if we live in an area well served by efficient transit.

Even metro taxpayers who cannot make the switch to transit save money if transit improves because other people switching to transit lowers overall congestion. Congestion costs each individual Twin Cities driver $695 per year in fuel costs according to the Texas A&M Transportation Institute (this is a 2011 number, their most recent data). Slightly reducing congestion can dramatically increase speeds and save fuel – we have all seen this happen when highway speeds leap after passing one small exit.

Additionally, any increase in transit use reduces pollution in the air we breathe and lowers our greenhouse gas output. This lowers non-transportation costs, like healthcare spending, and helps make people’s everyday lives better.

Paying $90 per year to increase transportation choices and ease congestion in our region is worth it. I would argue it is worth paying even more in the short term. The faster we can build a quality transit system, the faster we can make people’s lives better by saving them money to spend on local goods and services instead of foreign oil and cars.

Transit funding cannot be spent willy-nilly, however. Drivers will only be willing to switch to transit if it is fast and goes places people want to go. This means investing in a network that serves dense areas of housing and employment where maximum numbers of people can get out of their cars and onto transit. It means investing in transit where people can walk or bike to the line instead of driving to a park-and-ride.

Governor Dayton just appointed Adam Duininck as chair of the Met Council board, the institution that governs Metro Transit. Duininck is a transit user and understands smart transit investments. Here’s hoping he has money to make those investments.

How paying higher taxes to fund transit could save you money