Today is Martin Luther King Day in the United States. The Day was first implemented in 1986; first recognized by all States in 2000. This years MLK Day is one of the most significant in the days history, in my opinion.

Yesterday I went to the film “Selma” about the events surrounding March 25, 1965, and the ultimate passing of the Voting Rights Act later that same summer*.

The film is powerful and moving. I would urge attendance.

Today the very Right to Vote is under serious attack in many places in our country.

I’m an old geography major, so I always seek some geographic context. Here is a map of Alabama from my 1960 Life World Atlas: Alabama as of 1960. Here’s the more specific location: 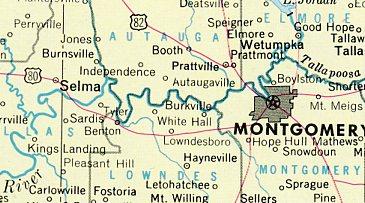 Selma Alabama is about 30 miles west of Montgomery, the capital of Alabama

At the time of the 1965 march, Selma was on the very bottom of my list of priorities. My wife, 22 years old, was desperately ill, and two months after March 25, she and I were making the long trip from Elgin ND to Minneapolis where she was admitted to the University of Minnesota Hospital for a needed kidney transplant.

The film, which opens with King receiving the 1964 Nobel Peace Prize, has been roundly criticized about its interpretation of then-President Lyndon Johnsons actions at the time of the voting rights act. At the same time, it has been suggested that the criticism has been motivated more by things like jockeying for position for Oscar nominations, than actual criticism of historical facts.

Actually watching the film, I think the general picture of that period in history is quite accurately portrayed, including its portrayal of Lyndon Johnson.

About a year before the events of Selma, and right after the assassination of President Kennedy (Nov. 22, 1963), Martin Luther King Jr., then 34 years old, published a fascinating book, still available, called “Why We Can’t Wait“, recounting the incredible year of 1963. In this book, which includes the famous Letter from the Birmingham Jail, the final chapter assesses in brief but fascinating fashion Presidents Kennedy and Eisenhower and Johnson.

I consider the book a must read for anyone hoping to understand the times of MLK. It is written in King’s own words, about the who’s and the what’s, just after the actions of 1963 had taken place.

There is one comment by Johnson in the film which wraps it up for me:

MLK is making his demand for Voting Rights for Negroes, and Johnson angrily asks King to understand the difference between advocating for a single issue, in this case, voting rights, versus the problem any President has, in juggling multiple issues, dealing with endless enemies and friends with differing and often conflicting priorities.

Of course, King also had enemies in high places: As most know, one of King’s major arch-enemies back in the day was J. Edgar Hoover, the powerful head of the FBI. The film uses, powerfully, entries from FBI logs about wiretapping King, then using these in efforts to destroy him.

It has long been clear to me that Johnson supported Kings ultimate goal of voting rights for all citizens, but, as Kennedy had before him, Johnson counseled King that a President, any President, cannot simply wave a magic wand and get his way with the often rebellious rabble called the Congress, and Governors, and all sorts of officials and individual citizens everywhere.

Direct, organized, cooperative citizen action is essential to success in any initiative.

That word “cooperative” is a tough one. King experienced those tensions too.

King, at least in my reading, got it, about how to succeed. The movement was not about him. He was an idealist, with a very practical sense about him. He knew his key ally, President Johnson, couldn’t do things exactly as demanded, on a set schedule, and that he had to mold the people into some kind of a working coalition needed to do the critical work, like enduring the danger of walking across the Edmund Pettus bridge in March, 1965.

Making change is very difficult. King, even with his allies sometimes in conflict with him, and with each other; and Lyndon Johnson, with an even more enormous quandary with everyone he had to deal with, accomplished something miraculous in 1965. About the time LBJ signed the bill, he was reported to have said that he knew this singular action would lose the south for the Democrats for a very long period of time, and he was right.

In my opinion, the Old South will not rise again, 50 years of some freedom and some justice have made a huge difference, though much work and diligence is required.

Some years ago I almost literally stumbled across another writing about the difficulty of political decision making, as recounted by two Peace and Justice leaders. They had met with former Vice-President Hubert Humphrey, Johnson’s Vice-President, and here is how they recounted Humphrey talking about practical politics.

Do watch the film, and read the book.

But most importantly, not only increase your own actions, but be more aware of the need to compromise and to be satisfied with incremental change rather than a too common “all or nothing” approach to negotiations.

The 1965 Voting Rights Act is in peril; the difference between now and 50 years ago is that the people who can solve the problem are no longer disenfranchised, and simply need to be certain to register and to vote.

* – An outstanding photo chronicle of Dr. King and the Civil Rights Movement is the 1995 book He Had a Dream, by Minnesotan Flip Schulke. Copies of the book remain available. I have the autographed book, from the 1998 Martin Luther King Day Breakfast in Minneapolis where Mr. Schulke spoke. Pages 90-115 photo document the Selma action in 1965. Mr. Schulke was a graduate of Macalester College, met and first photographed Dr. King in 1958, and worked with him until Dr. King was murdered in Memphis April 4, 1968.

POSTCRIPT: I wrote previously about Why We Can’t Wait on Martin Luther King Day in 2013.