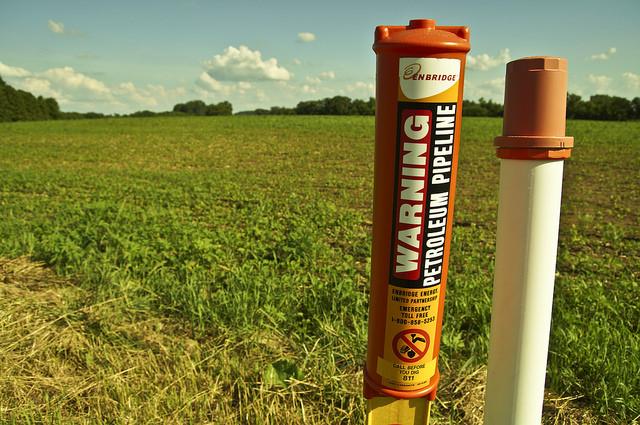 In the wake of last week’s Yellowstone River oil pipeline spill, one county in southern Wisconsin is asking tough questions about the proposed expansion of Enbridge’s Line 61. The pipeline crosses the St. Croix River headwaters, and is set to triple its flows later this year.

The expanded Line 61 requires new pumping stations along its route, which is the only opportunity for citizen input. The Wisconsin Department of Natural Resources is rejecting calls for environmental review of the increased capacity, despite the fact it would make the pipeline significantly larger than the controversial Keystone XL pipeline.

Enbridge’s own data states it had 804 spills between 1999 and 2010, releasing about 5 million gallons of oil, according to a report from the Canadian Polaris Institute (PDF).

There has been a lot written about the issue during the past couple weeks, so here are highlights, links, and context. Readers are urged to click links to full stories to read some of the excellent in-depth reporting that has been published recently.

Lots of oil left in the Yellowstone River

Clean-up efforts in the Yellowstone River continue to be confounded by ice covering the river. Of about 40,000 gallons spilled, clean-up crews have recovered 11,500 gallons, mostly from inside the broken pipeline. Only about 630 gallons, of an oily, watery mix have been removed from the Yellowstone.

“We still obviously have a very serious issue here. We’ve had very limited success because of the conditions. It is extremely challenging and there are significant safety hazards for having people working on the ice,” Bill Salvin, a spokesman for Bridger Pipeline, the Wyoming-based company which owns the pipeline, told the Guardian newspaper.

Workers had set up a collection point 60 miles downstream from the spill, but had to abandon it due to softening ice.

“We’re not able to get anything substantial, but we’re mopping it up where we find it,” Jeni Garcin with the Montana Department of Environmental Quality told the Associated Press.

In response to the spill, the federal government is mandating that the pipeline ultimately be buried deeper under the riverbed.

Local residents say a massive ice jam occurred in the river near the pipeline rupture in early 2014, and could have contributed to breaking the line. The Environmental Protection Agency’s website and the official Poplar Response website have more information and updates.

Saying the spill contaminated his “favorite river,” American Rivers‘ staffer Scott Bosse reports that the affected section of the Yellowstone is a local hotspot for agate hunting, as well as fishing for many species, wildlife watching, and solitude.

In the video below, shot on the banks of the Yellowstone in the spill area, Bosse says we “need to do a better job balancing our development of our energy resources with preservation of our for clean water, and our fishing and hunting and our boating.”

The national river advocacy group Bosse works for is calling for strengthened pipeline standards. In an online petition, the group says, “Many pipelines transporting oil are old and outdated. Tell the U.S. Department of Transportation’s Pipeline and Hazardous Materials Safety Administration (PHMSA) to strengthen environmental standards for any oil pipelines that cross our nation’s rivers.”

In an email, St. Croix River Association executive director Deb Ryun writes that the Yellowstone River spill “makes someone like me sit up and pay attention.” Citing Line 61’s route across the St. Croix watershed, she urged people to sign American Rivers’ petition.

In Dane County, near Madison, officials are considering requiring Enbridge to provide more funding for clean-up of spills before they approve the company’s request to build a new pumping station.

Last night, its chambers packed by concerned citizens, the county’s zoning committee postponed a decision on the matter, after Enbridge offered to insure the county as part of its insurance policy.

Meeting re: permit for Enbridge about to start. Packed house- there are only 5 committee members, rest are citizenspic.twitter.com/fVXCUuIh5e

According to the Wisconsin State Journal, the committee didn’t feel like it had enough information to accept or deny the offer. Committee members decided they weren’t certain that they understood exactly what was being offered, if it was the correct type of insurance or in an adequate amount, committee chairman Miles told the paper.

The company told the committee that it carries $700 million in liability insurance. Clean-up of Enbridge’s major 2010 spill in Michigan’s Kalamazoo River has cost $1.2 billion so far. Enbridge says it paid all clean-up costs related to the Kalamazoo spill, and providing more insurance for Line 61 may be too costly.

Dane County is not the first county in Wisconsin to raise concerns about the pipeline. Five others along the route have passed resolutions asking the Wisconsin DNR to review the pipeline’s potential environmental impact. But the DNR says that was done when the pipeline was first built in 2007.

“There was joint department and Army Corps of Engineers environmental analysis that took place in 2007. Another portion of Line 61 that went west from Superior – called the Alberta Clipper. That project also had an environmental analysis open for comment and finalized by the department, in addition to a federal environmental impact statement,” Ben Callan, the agency’s lead on the project, told Milwaukee Public Radio.

Rock County was one of the counties to call for a full environmental impact statement for the pipeline expansion. Rich Bostwick, county board supervisor and chairman of its land conservation committee, said the environmental assessment was insufficient to analyze risks.

“We want the DNR to do an environmental impact statement, take a critical, unbiased look at the pipeline’s construction, its normal operation and the potential for accidents. If that’s not in place, I don’t how this can be allowed to happen,” Bostwick told the Janesville Gazette. “An assessment is nowhere near as comprehensive as an impact statement, and, without it, how do you know what could go wrong and therefore how to deal with it?”

The 2007 environmental review only considered the original 16.8 million gallons per day of oil that the pipeline initially carried, not the 50 million gallons per day that will flow through it by 2016. It also took place before the Kalamazoo River spill, which provided many lessons about pipelines, rivers, and the sticky tar sands oil flowing through it, which seems to sink in water.

That’s why anti-pipeline activist Carl Whiting still thinks Line 61 poses a big threat, saying enough oil will flow through the pipeline every hour to fill more than three Olympic-sized pools in an hour.

“I don’t even want to think about what would happen to the Rock, the Wisconsin, the St. Croix River, any of these wetlands or tributaries, if there were to be a breach of this massive pipeline,” Whiting told Milwaukee Public Radio.

Despite Dane County and other opposition, Enbridge remains confident the pipeline expansion will proceed.

“We think this project will move ahead. We think we’ve addressed the concerns that have been raised appropriately by the zoning board. By and large, everything else is in place (around the state) that needs to happen,” Mark Maki, president of Enbridge Energy Partners, told WisBusiness.com.

With a potential lawsuit hanging over Dane County if it denies Enbridge the pumping station or adds insurance costs, county supervisor and zoning committee chair Patrick Miles seemed resolved to hold the company accountable, saying the costs of a spill could be enormous.

“Tripling that capacity to me is… tripling the risk,” Miles recently told Madison’s community radio station WORT. While the Kalamazoo River catastrophe spilled 800,000 gallons of oil in 17 hours, Miles said that “at the volume of what we’re talking about here, in an hour’s time, if there’s a spill at the proposed flow rate, we’d be talking about more than 2,000,000 gallons.”

Here are all the articles and other links referenced in this story: