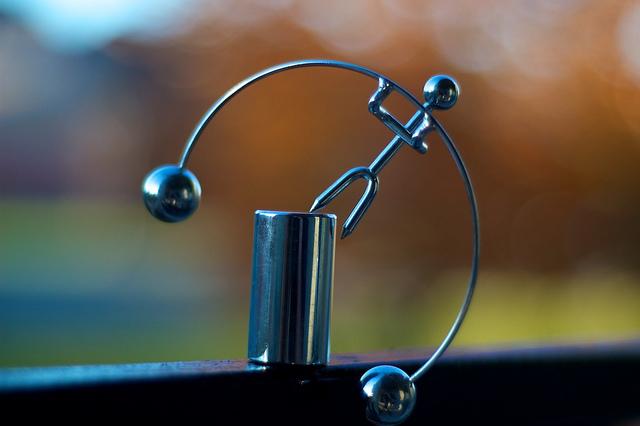 CC/Flickr/Colin Harris  ADE
The “balance” in their families is less about women juggling responsibilities alone than it is both partners dancing daily through a life that is contradictory and complex, with trade-offs and rewards in equal measure.

At a time when the necessity and affordability of high-quality child care is back in the news, two Generation X mothers — educated, ambitious and deliberately underemployed — exemplify a model of work-family balance that provides a different solution to a persistent problem.

Who takes care of the kids when both parents work?

In the households of Julie Reiter and Liz Boyer, the answer is: It’s a family affair. “The most important job in the world,” as Chelsea Clinton recently described motherhood, is the work of mothers and fathers alike, in Reiter and Boyer’s respective marriages.

The “balance” in their families is less about women juggling responsibilities alone than it is both partners dancing daily through a life that is contradictory and complex, with trade-offs and rewards in equal measure.

A recent conversation with these two Gen X moms convinces me they have learned from my workaholic generation — and that it’s not too late for us Baby Boomers to learn from them about priorities and possibilities, teamwork and trust.

Born between 1965 and 1980, Generation X was raised during what one analyst calls “one of themost blatantly anti-child phases in history,” when feminism, greater career opportunities and more access to birth control (and abortion) gave women a new range of options.

Gen X mothers are more skeptical than we were about the messages that society — and advertisers — are trying to sell them. (Remember the slim, sexy “24-hour woman” in the Enjoli perfume ad who brought home the bacon and fried it up in a pan?)

The mother of Ellie, 10, and Alex, 6, Boyer longed to be an at-home mom — a role that my generation shunned as old-fashioned and professionally limiting. But that dream was financially impossible given her husband’s career in education and nonprofits.

After spending two years “pissing and moaning” when Ellie was a baby, Boyer has made peace with having to be employed. “In retrospect, it’s made me a better mom to work part time all those years,” she says.

Having only recently started working full time, however, she acknowledges the career sacrifice she’s made, too: “I’d be at a different point in my career if I hadn’t had kids.”

My husband and I used to call ourselves “Ozzie and Harriet in reverse,” with me as family breadwinner and him as self-described “Mr. Mom.” It was new wrapping on an old package that limited one partner’s family time and the other’s earning potential.

Now that our two sons are grown, I remember — and try not to regret — how much mental and emotional energy I gave to my career. When I wasn’t literally at the office, I often was thinking about work, or I was engaged in the freelance writing and aerobics teaching that helped me feed the family (and my ego).

Reiter and Boyer, like other Gen X mothers, have a more fluid, seamless approach to life and work. They are present with their children, holistically, in a way that I couldn’t seem to manage. And while they care about their careers, work is not their first priority.

“I like to work hard. I love challenge,” says Reiter, 42, executive director of Union Park District Council in St. Paul and a Berkeley-educated attorney. “But I clearly don’t care about the career path, or I would have followed that route.”

Her husband jokingly calls her his “downwardly mobile wife.” Reiter was planning to practice in a prestigious downtown law firm when they met, and she still has more earning capacity than he does as a human resources specialist.

Today, they are partners in a shared endeavor to raise and support their son and daughter — Beyen, 8, and Beena, 7 — whom they adopted from Ethiopia as toddlers. Reiter’s husband works from home most days, giving her flexibility and him access to the children, and her office is two blocks away, allowing her to be home with the children after school and at dinnertime.

Lesson 3: Accept that life is unpredictable.

If I could do anything differently, I would worry less and enjoy the moment more. (My older sisters tell me that’s the benefit of being grandmothers.)

Between them, Boyer and Reiter have lived through job loss, pay cuts, ill children who spoke no English, arguments about whose turn it is to cook and buy groceries, and, currently, full-time jobs with tangible rewards but no benefits.

And yet: They laugh easily. They see the big picture. When Boyer was commuting from St. Paul to Chaska with a colicky baby at home who refused to take a bottle, she lamented to a friend that the life she’d created wasn’t working.

“You’ll keep tweaking things till it does work,” the woman told Boyer. “Everything will be alright in the end, and if it’s not alright, it’s not the end.”

Reiter’s mother was home full time until Julie was 15. “And she resents it to this day, the fact that she never had a life of her own,” Reiter says wistfully. “My mom says now: ‘It’s so good that the kids see you go off to meetings. It’s important for them to understand your work ethic.’”

She grins. “When we walk into the Neighborhood Café, my kids see people give me a hug and thank me for my work. I’m investing in this community, and it’s benefiting my family.”

What Gen X can teach Boomers about parenthood