Many of us here in My Minnesota may need a reminder of what we’re seeing today. It’s called a blue sky. Here’s a photo for historical reference. This particular photo also contains a crow (rounded tail). In case you’ve forgotten, blue skies are usually accompanied by sunshine coming from the large yellow object in the daytime sky that’s supposed to provide both light and warmth. It’s the ultimate energy source for all of earth, but you knew that. The good news is that, technically, (meteorological) Winter ends a week from today. The bad news is our Anthropogenically Disrupted Climate doesn’t seem to care about technicalities.

Our extended forecast, for what it’s worth, doesn’t show any daytime highs above freezing until  March 7. I think it’s been mentioned in one or two postings here that Minnesota’s weather would be really pleasant if our average highs and lows and precipitation amounts and all of those things were not derived from such a range of extremes. For example, February’s average low is 12°F, the average high is 29°F. Those are Winter temperatures that make going for a walk acceptable to pleasant, if the wind isn’t blowing very hard. Those averages, though, are bracketed by a record low of -33°F and a record high of 64°F. 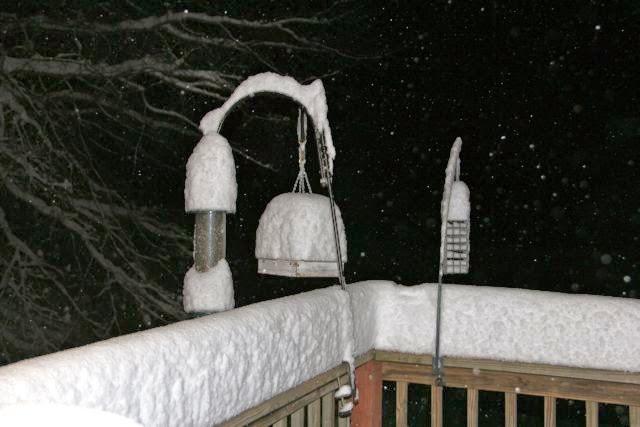 One of the results of climate change is supposed to be an increase in volatility in precipitation, where we get fewer, larger storms. If we get a correspondingly volatile pattern in local temperatures (Polar Vortex, anyone?) our averages may stay about the same or increase slightly, but our daily lives are likely to be much less pleasant. I haven’t read enough of the details or the appendices of the IPCC reports to know if my concerns are well founded, but the impact of the June 2012 rains in Duluth, or this Winter’s snowfall in New England, give a hint that daily life might become as average as Minnesota’s temperatures.

This New York Times article should trigger some thinking about what it might mean to strategies that defer infrastructure investments and the challenges of budgeting for snow removal or, in the case of hourly workers, trying to address social equity. We’d best be thinking about more than moose and forests when we think about the cost of adapting to climate change. And the longer we take to respond, the more we’ll need to adapt. We’re not now faced with the degree of drought California has. Give us a little more time to dawdle and we’ll get there. Once again, take a look at how the Minnesota Pollution Control Agency reports we’re doing on meeting our Green House Gas reduction goals: 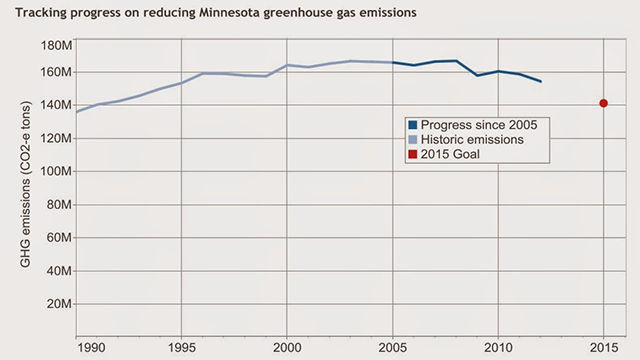 At the rate we’re “progressing,” it’s going to be a huge challenge to meet even greater 2025 (30%) and 2050 (80%) reductions. This looks to me like something that should be taken into account on all those national rankings of best places to live work play and invest your homeowner equity. Think it’ll get added anytime soon? Or will we continue to rely on things like the Great Recession to “help” us reduce our green house gases? Remember that old saying about what isn’t measured isn’t managed?