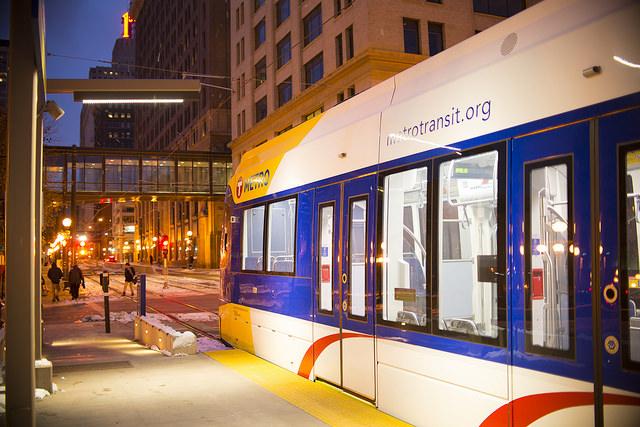 Courtesy of Metro Transit/Eric Wheeler
Nearby properties that significantly benefit from new transportation infrastructure will see that benefit reflected in their local property tax bills over time.

“To place the full burden of rapid transit service on the passenger does not seem just, in view of the collateral advantages which flow to neighboring property owners in the form of enhanced land values, and to business interests and the public at large by reason of increased prosperity and convenience….An equitable division of the cost of service between the passenger through his fare, the neighboring property owner through assessment, and the business man and citizen through general taxation should make feasible the expansion of rapid transit facilities without weighing too heavily on any of the interests affected.”

As our new Issue Brief on the practice and potential of value capture for transportation finance explores, bridging the gap between good theory and actual practice has proven to be challenging. Value capture, which meets several tests of good public finance, is a lot trickier than it sounds. For starters, isolating and determining the value of land for properties that have already been developed is difficult. When land value increases after transportation infrastructure has been built, determining how much of that increase was caused by government investment instead of the multitude of other factors influencing land value is not simple either. And since the purpose of using value capture is often to help pay for the construction of a transportation project, how do you determine and capture value that hasn’t yet been created? A closer look at the many transportation value capture success stories shows how implementing authorities simply establish assessment and fee structures based on some cost recovery basis that has little if any connection with true value capture.

All these implementation challenges are compounded by another reality – modern public finance already includes a boatload of value capture. For starters, the local property tax – the tax everyone loves to hate – ironically is at its core a value capture mechanism. There is overwhelming evidence that spending on public infrastructure and amenities like schools, roads, and parks is reflected in higher private property values. The property tax effectively captures some of that increased value and returns it to public coffers to maintain and support the public infrastructure and services which helped create the property wealth in the first place. The point is, nearby properties that significantly benefit from new transportation infrastructure will see that benefit reflected in their local property tax bills over time. The practical difference between transportation value capture and the traditional local property tax is in how the revenues are treated – receipts go to special transportation accounts rather than government general funds. A lot of value capture strategies might be better described as “value dedication” strategies.

Then there is local governments’ ubiquitous use of value capture. Communities commonly use special assessments, development fees, tax increment financing, and similar value capture tools to help pay for their own infrastructure needs. Another kicker is Fiscal Disparities, which captures and redistributes a huge amount of business property value in the metro area. The point is: there are already a lot of beaks dipping into the value capture pool.

There may be ways to navigate through all these complexities and the many associated legal and political issues. The strong tax and public finance theory behind the concept suggests a navigation attempt may be worth the effort. But the message we take away is this: it might be wise to lower the expectations and above all be very thoughtful and very careful about what you get into.

The trouble with using value capture to pay for transit