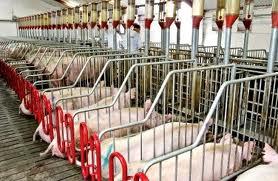 What is the best way to house sows? Is it individual gestation pens? Is it group housing? For most people, sow housing raises a lot of questions. Let me start with saying,

“There is NO perfect sow housing. None. Nada.”

When housing sows indoors, there are two options: Keep pigs in groups, or put them in individual gestation pens. The vast majority of pigs used for food are kept in groups. But pregnant sows are housed individually in gestation pens. Why? Because they behave differently.

And let me explain how they behave differently. But, first a little background about our farm:

We have farmed for over 35 years and during those 35 years, our farm has changed significantly. Those changes have either improved our lives as farmers, the lives of our animals or both.

Starting with a 96-sow herd, our sows were housed outside because that’s all we had. As new farmers, we were excited that we were following our farming dreams. Try to visualize four outdoor dirt lots, separated by a fence, with each lot containing a group of 24 sows. They remained outdoors until it was time for them to give birth. A few days prior to birthing, they were moved into a barn, which had 24 farrowing (birthing) stalls. They remained there from giving birth to piglet weaning day.

I will be the first to admit that having sows outside on a sunny, dry 70-degree day with a warm breeze blowing across your face is wonderful.  But, unfortunately, we have 5 days a year like that in Minnesota (okay, maybe a little exaggeration). It seems like either it’s too windy, too hot, too cold, too dry, too wet, too sunny, etc. You get the picture.

In a nutshell, weather varies a lot in Minnesota.

We knew we needed to make changes on our farm if we wanted to raise pigs long-term. Mother Nature wins more times than we do. One particular incident I remember “like it was yesterday” was a perfect example of why we considered a change in how we housed our animals. After a thunderstorm, a sow gave birth to piglets outside. Even with the best planning, sometimes births happened outdoors. Unbeknownst to us, another sow picked up each of those baby pigs, took them outside and drowned each one of them in a mud puddle. Every single one. We were heartsick. Both my husband and I looked at each other in bewilderment as we removed each one of those healthy piglets from the mud puddle. We both agreed that day, there must be a better way to take care of our animals. That day we felt like failures. So was the beginning of our journey to build a gestation barn with individual gestation pens.

Our decision did not come easy. It took time, lots of farm discussion meetings, multiple trips to the loan officer and numerous discussions with our veterinarian, who was our animal consultant.

And it was just not that particular incident that helped make our decision.

Most people don’t realize that pigs are pack animals — they actually exhibit some of the same behaviors as wolf packs. Because they are pack animals, they need to establish a hierarchy within the group — or a “boss” sow. The way they establish this hierarchy is by attacking/fighting each other. I personally have seen broken backs, broken legs, bitten/torn off ears and tails, and bitten/torn off vulvas. And not only are sows physically attacked — they also bully other sows from eating. In addition, fighting results in terminated pregnancies. Very hard to see and experience.

In addition to animal well-being issues, consumers’ tastes were also changing. They were demanding a leaner cut of pork. In order to provide leaner pork, our pig genetics had to change. We now raise a cross between a Large White and Landrace pig. The result? A long, lean pig–perfect for lean and nutritious pork. Prior to housing our animals inside, our main focus for pig genetics was survival of Minnesota’s winters.

In addition to weather problems and the sow’s pecking order, we were also concerned about:

After our gestation barn was built and the day we brought our sows inside, we noticed a difference in our sow’s behavior. Our sows were now content. No longer were they having to fear the “king sow.” They had protection. Research shows that sows housed in stalls have a lower stress hormone than those housed in groups. In addition to animal contentment, we could now eliminate nearly all the weather issues. Temperature and fan controllers were used in the barns to help manage temperatures and bring in clean air. All sows had access to clean water and the proper amount of fresh feed. We now –could ensure they all ate–no more skinny or fat sows. In the summer, we kept them cool with a water sprinkling system, which is so important because pigs do not sweat. And we could give individual medical care, if needed.

Sow housing is an individual choice. For our farm, individual gestation pens were the right choice. But for others, group housing works for them. Both the American Veterinary Medical Association and the American Association of Swine Veterinarians agree that both types of housing are acceptable. The real key to animal care is not the type of housing but, rather, the management of those animals.

According to Smithfield Foods, who has already made the decision to move their sows into group housing, observed that, given a choice, 90% of the sows prefer to spend 90% of their time in individual stalls. And research backs this observation.

Farmers do care for their animals by working as team with veterinarians and animal nutritionists. Animal mistreatment on farms makes as much sense as a car dealer keying his inventory. And none of us are “keying cars.”