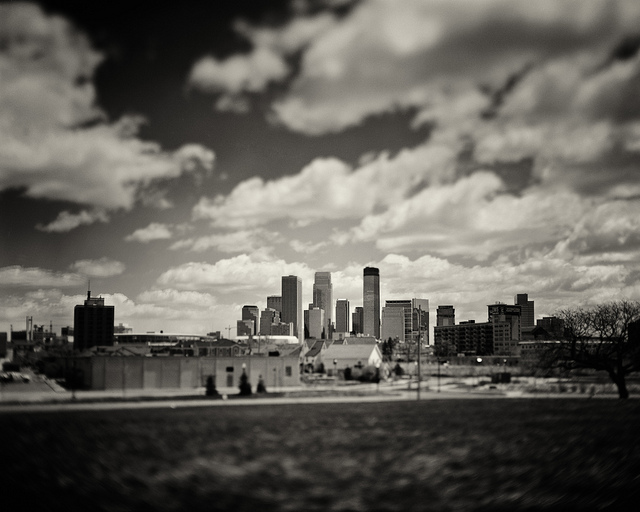 CC/Flickr/Joe D
Fair market rent in the Twin Cities is $745 per month for a one-bedroom apartment, and averages $531 a month in the other 80 counties of greater Minnesota. The median monthly income among homeless adults in Minnesota is just $400.

Last night, about 14,000 people in Minnesota were homeless. That is an all-time high for our state, and we will not see this number go down until we address the most fundamental and frequent reason why people find themselves homeless to begin with: an inability to afford their housing.

It is also true that race, mental illness, chemical dependency and other serious health concerns show up disproportionately among people experiencing homelessness in Minnesota. But these are characteristics shared across the socio-economic spectrum. And none of them rise to the top as the most frequent reason for becoming homeless in the first place. Housing affordability is the most significant reason people lose their housing – and the primary barrier to regaining it. Here is a look at the numbers that go into the math equation of housing affordability:

What is affordable rent?

Housing is generally considered affordable, particularly for lower-income households, when it costs no more than 30% of your income. Housing that costs 50% or more of your monthly income is considered a severe cost burden.

Fair market rent in the Twin Cities is $745 per month for a one-bedroom apartment, and averages $531 a month in the other 80 counties of greater Minnesota. The median monthly income among homeless adults in Minnesota is just $400 – meaning they can afford about $120 a month for their housing costs. This is well below the fair market rent anywhere in the state.

What is a living wage?

Unfortunately, working full-time doesn’t solve the affordability problem and the fundamental reason why people become homeless. One-quarter of homeless adults in Minnesota are employed and almost 10% work at least 35 hours a week. Most earn less than $10 an hour, with a median monthly income of just $1,100. That means that about 1,000 of our fellow Minnesotans work at least full-time and still can’t afford a place to live.

Last summer, our policymakers increased the minimum wage in Minnesota, eventually raising it to $9.50 by August 2016. Advocates worked tirelessly to make this happen, and the lawmakers who supported it took a bold stand. But our lowest wage workers will still need to work about 90 hours a week in order to afford market rate housing in our state.

What can YOU do?

The good news is that homelessness is solvable. Our voices make a difference at the Capitol and we have the power to influence our policymakers.

Senta Leff is a Program Developer at the Wilder Foundation. Her work takes her to the intersection of issues that make a difference to affordable housing developers, supportive housing service providers, funders and consumers. She is also a board member with the Minnesota Coalition for the Homeless.

Homelessness is not a character flaw, it’s a math problem