There’s more evidence that the efforts Minnesota has taken to more equitably share the responsibility for funding schools, roads, nursing homes and other critical services have paid off.

The state’s new Tax Incidence Study looks at all state and local taxes that Minnesotans pay, and measures those taxes as a share of Minnesotans’ incomes. This year’s version of this essential study from the Minnesota Department of Revenue has information for 2012 and projections for 2017. That creates a “before and after” picture of what differences the tax reforms of 2013 and 2014 have made. 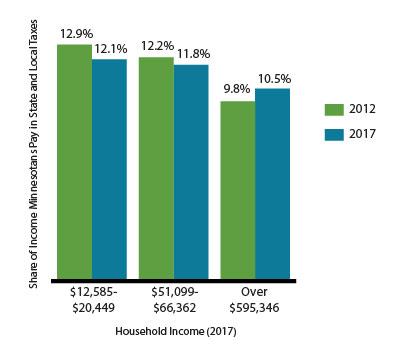 Minnesota made this progress on making the tax system more fair through tax policy changes in 2013 and 2014 that, taken together, raised taxes on the highest-income Minnesotans closer to the state average, and lowered taxes for all other income groups.

The Tax Incidence Study identifies the five recent policy changes that had the biggest impact on the distribution of taxes in Minnesota. The three policy changes that did the most to make taxes less regressive were the “4th tier” income tax bracket on the roughly 2 percent of Minnesotans with the highest incomes, increases in the Working Family Tax Credit, and larger property tax refunds (primarily for homeowners but also for renters). The two most regressive policy changes were the increase in cigarette and tobacco taxes, and estate tax cuts. The cumulative effect of the tax changes passed in 2013 and 2014 was to make the tax system more equitable.

But it seems that some want to bring us back to the bad old days, when low- and middle-income Minnesotans paid significantly more than their fair share. There are a substantial number of bills moving in the Legislature that would cut taxes just for those with the highest incomes, such as:

Bills like these that provide large tax cuts to the highest-income Minnesotans should not be our state’s priority. Instead, we should continue the positive direction we have taken over the past two years, which has focused on making the system more equal.

In addition to the distributional impact of tax changes, policymakers also need to keep an eye on the overall size of tax cuts. The lesson of the late 1990s and early 2000s is clear: too much tax cutting in the good times was followed by greater reliance on property taxes, double-digit increases in tuition at public colleges and universities, and higher fees. That combination put more of the responsibility for funding public services on to low- and middle-income Minnesotans.

While the tax increases passed in 2013 are often mentioned in the current debate, this was followed in 2014 with two tax cutting bills that reduced taxes in the upcoming FY 2016-17 biennium by around $1 billion.

The state’s more positive budget situation shouldn’t mean a change in direction. As policymakers put together their tax bills this year, they should continue progress toward a fair tax system and a sustainable budget, rather than enact large tax cuts for a privileged few and put services Minnesotans count on at risk.