When I visited Minneapolis in 2006, I remember thinking that the North Loop’s Town Place Suites hotel was in the middle of a ten-block wide paper processing plant, and that the brand new Guthrie Theater in the Mill District was like a extraterrestrial meteor that left a massive crater of parking lots in its vicinity.

My dad and I met up with my aunts and uncles at the Applebee’s on Washington Avenue in the depths of the University of Minnesota, and I remember thinking how weird it was that our rental car was able to drive on this four-lane undivided freeway through a huge college campus, how strange it was to see probably 100 students at the Church Street stoplight waiting to cross while my we cruised straight into the old Radisson Hotel parking lot at a 35 mph clip. Being a native of Colorado and touring painstakingly-liberal Boulder throughout my teenage years, the concept of zipping right through the heart of a massive pedestrian zone surprised even myself as a soon-to-be permitted driver. And as a geography and general sports fan, I remember how ironic it was that we arrived in an area called “Stadium Village”, a run down commercial strip that lacked any real stadium in sight. 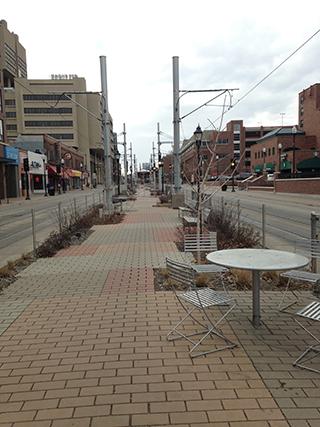 Oh, how the times have changed for the better, especially around Minnesota’s Big Ten college. And even more specifically, how they have changed for Stadium Village & the Washington Avenue strip, a previously vehicle-torched, heavily overlooked faux-entertainment district into the poster child of New Urbanist principles within the entire state of Minnesota.

The evolution of Stadium Village was a slow process, but really jumped into gear starting in 2006, when it was announced that the University was going to build a new football stadium and bring the Gophers from the Metrodome back to campus. This helped spark a quick revival of some of the existing retail slots along Washington Avenue, including the remodel of the Stadium Village Mall and the opening of Raising Cane’s and Tea Garden. At the same time, the planning of the Central Corridor (Green Line) LRT continued to progress, and although some lawsuit roadblocks with the University almost halted the train in its tracks, Washington Avenue was ultimately selected as the LRT location of choice. At the same time, demand for more adequate (not necessarily luxury) student housing continued to build and strain the existing supply near campus. The triple-whack of skyrocketing gas prices, a drastic reduction of parking spaces at the TCF Bank Stadium location, and a crashing economy in 2008 discouraged suddenly expensive vehicular commuting to campus. In the same year, transit and bike commute mode share percentages soared. 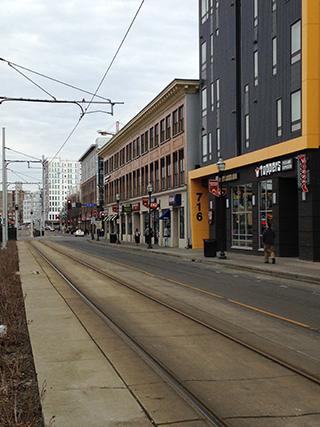 The debut game in TCF Bank Stadium was a 20-13 victory against my hometown Air Force Falcons in September 2009, but the more important transformation was occurring outside the stadium’s brick walls. Sydney Hall in Dinkytown began construction in the same month, hailing in Minnesota’s student housing boom period. Once Sydney Hall opened in 2010 and other developers began to notice the value of new housing near campus, the value of land abutting the Central Corridor became obviously clear.

Stadium Village Flats and the Edge on Oak were the first to break ground in 2011. Meanwhile, LRT construction started in full swing in 2011, completely ridding vehicles between East River Road and Walnut Street and entirely transforming the landscape. Suddenly, with off-street parking lots becoming moot along a vehicle-free roadway, the land plats began to transform. The construction of the Wa-Hu building at the former Arby’s site will cap Stadium Village’s east side with an 11-story residential tower and a massive row of street level retail slots.

The Green Line opened in 2014, but the real result of the Washington Avenue transformation was visible a year before. The four vehicle lanes were reduced to two “transit” tracks and two large bicycle lanes, along with large sidewalks and a median greenscaping project complete with trees, chairs, benches, and Minnesota native plant species.

From a pedestrian’s perspective, crossing Washington Avenue is no longer a stressful game of Frogger. One can peruse up and down the street and enjoy the various storefronts underneath stories of apartments. One can grab lunch to-go with a friend, cross mid-block between Harvard and Walnut Streets, and sit in the median area as light rail trains slowly pass you by. The sidewalks are busier than ever with the new concentrated student population walking to and from class, stopping mid-stroll for a coffee or snack at one of the corner pharmacies. 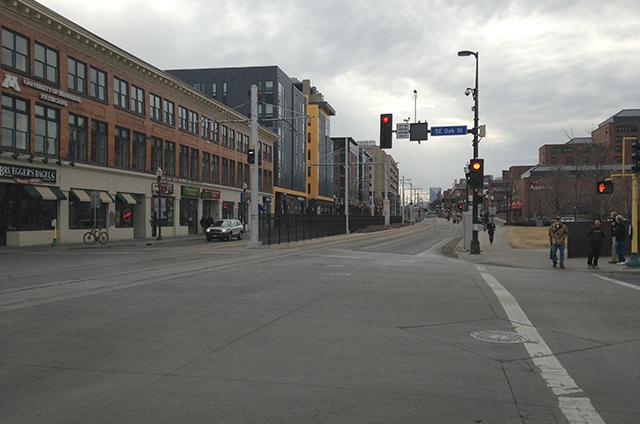 From a biker’s perspective, the full lane on either side of the tracks is all for you. Buses ride on the LRT tracks between Church and Walnut Streets, giving you a wide area to cycle. The lane boils down to a standard bike lane after Walnut and then disappears after Oak Street, but the traffic counts through this stretch is so low and the lane is so narrow that you truly never feel uneasy.

Although transit was always quite good around campus, the addition of the Green Line and Stadium Village’s two LRT stations (East Bank and self-titled) has bolstered transit usage in only 9 months’ time. Ridership has exceeded initial expectations and might hit 2030 projections later this year. 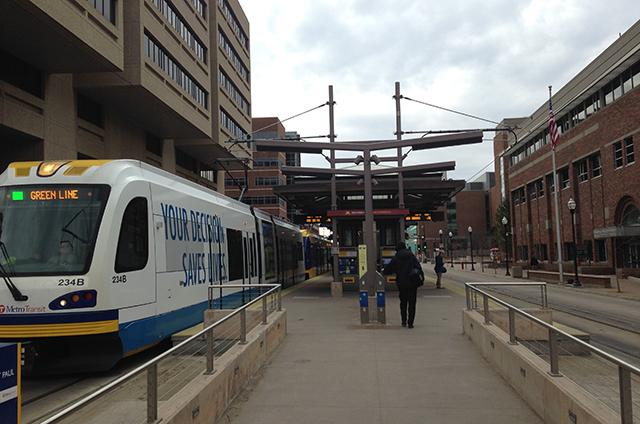 New Urbanism, I want to see more of it… please

Stadium Village’s transformation was the unintended result of private, public, and institutional sector changes. If TCF Bank Stadium was never constructed and replaced parking, if the Green Line was shut down and never built, if developers never took the risk on “poor on paper” students, perhaps Washington Avenue would have stayed the Four Lane Death Road™ you see on Rice Street in St. Paul or Lyndale Avenue in Minneapolis.

If we are to truly invest into the oftentimes repetitive mantra that so many city officials and high profile developers spew on cue, we have to ruffle the feathers and drastically change protocol that has been simply too sacrosanct to manipulate in the past. If New Urbanism is to thrive in cities, some roads may need to dieted even more than Atkins would recommend, some properties may need to just be punched through and redeveloped in the name of added density, some long-running higher-ups may need to be critiqued on their archaic mindsets. Even with New Urbanist principles gaining in popularity, players on both sides of the private/public gaming table need to start getting comfortable with being uncomfortable.

What is the next item on the agenda to “make uncomfortable” to improve our Twin Cities? Will we put our foot down and exclaim “no” to a historically commonplace road expansion? Will we demand the city and county to close a road through an upcoming urban park? Will we constantly strive to place PRESSURE on developers and architects to design and construct good urban principles in all parts of the city?

Chris Iverson is a transit plangineer in the Twin Cities, and lives in one of those apartments in Minneapolis’s Lowry Hill neighborhood. He holds degrees in both Civil Engineering & Urban Studies from the University of Minnesota. He is a former Minnesota Daily columnist, RAGBRAI participant, marathon finisher, and chronic procrastinator.