Check out this bridge! It’s a pedestrian bridge — meaning that it’s for pedestrians, walking “on foot” with their legs. For the sake of this post, say that you were in the market for a pedestrian bridge and, bear with me here, you wanted one that looked just like that one in the picture, but less pixelated and with a better-looking train under it.

How much would you bid, on this pedestrian bridge that crosses a lightly-used two lane street and the corner of a train station?

One half of one million dollars?

More than that? And yes, we are speaking about American dollars, currently one of the stronger currencies out there. 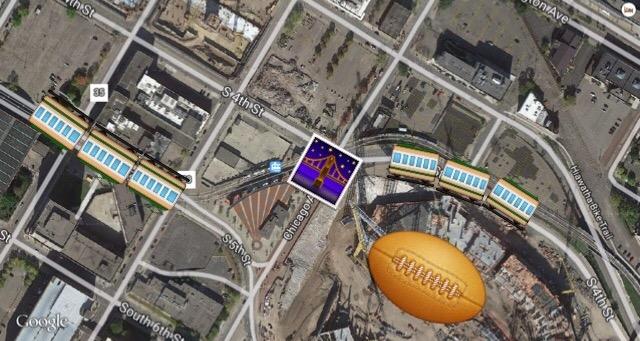 On Monday, the Transportation Committee of the Metropolitan Council (an organization the author of this post has gone out of his way to defend the existence of at length in his free time) voted to spend 6 million dollars on that pedestrian bridge! The need that has been expressed is that many people (thousands!) are expected to arrive at the new Vikings stadium via light rail transit on the Blue and Green Lines, a mode shift that should be celebrated. In the future, the extension of the Green Line will directly connect the Vikings stadium by rail transit to Vikings season ticket holder central, in the southwest metro, and maybe even more people will arrive via transit.

But is preventing thousands of Vikings fans from touching a Minneapolis street worth the cost of this pedestrian bridge?

Seeking to discover how onerous this proposition in fact was, I researched “pedestrian bridge costs” and it would appear that this is an expensive pedestrian bridge by many measures. The Martin Olav Sabo bike and pedestrian bridge over Highway 55 and the Blue Line, which is far larger than this bridge and also looks nice and is used by people everyday and is not completely unnecessary, cost $5.1 million. 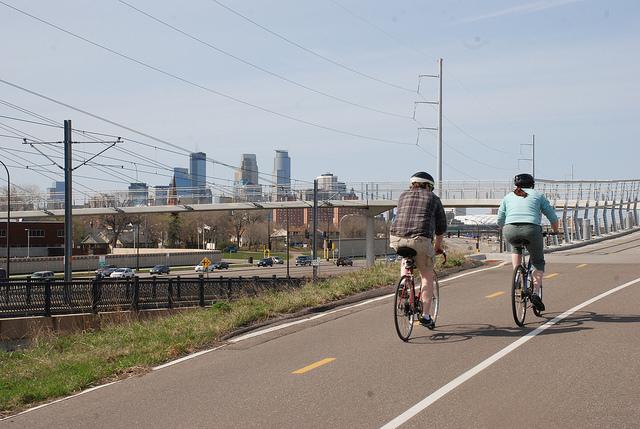 Furthermore, this bridge is being built (by the Metropolitan Council, not the Vikings!) for Vikings games, which occur at home eight times per annum, plus the playoffs, maybe. A Vikings game is the only conceivable event for which this bridge will be used, because all other non-2018 Superbowl and 2019 Final Four events that this stadium will host will be so lightly attended that people will just cross the tracks at the light rail station rather than backtrack up some ramp. Unless they do something absurd like fence off the existing pedestrian route, which will probably happen in two years in order to justify the $6 million spent on the bridge.

In addition, the underground parking ramp sitting next to Downtown East Station is owned by the Minnesota Sports Facilities Authority, and, in theory, would be a good candidate for redevelopment at some point, but it will be significantly impacted by this bridge, which will eat up much of its above ground area, and make it much less attractive for private sector redevelopment.

One option for not spending $6 million on this pedestrian bridge is that people could instead cross Chicago Ave., a fairly lightly used two lane street which separates the train station from the Vikings stadium. It is odd that 23rd Ave. Southeast, between the Gopher football stadium and Stadium Village station, is closed at the end of Gopher football games (and, currently, Vikings games) to facilitate pedestrian movement to and queuing for the Green Line, and that is all kosher, but this would not be.

Furtherestmore, are there better uses of $6 million of finite Metropolitan Council money?

Per a Finance & Commerce article,

Council member Jennifer Munt, who represents the Minnetonka area, agreed that the pedestrian connection is needed for safety reasons but said the Vikings should be paying more because the project will mostly benefit the team’s fans. She pointed to other system priorities — like shelters with light and heat in the region’s poorest areas — as better uses of $6 million in Met Council funds.

Council member Jennifer Munt from Minnetonka is correct that those things are better uses of $6 million. The International Space Station orbits between 330 and 435 kilometers above the Earth; if you stacked $6 million worth of pennies on top of each other, it would be more than twice as tall as that orbit. Alternatively, 1,000 bus shelters could be purchased, or perhaps 100 heated bus shelters. Or, if we were averse to spending money on buses for fear our constituents would not use them, we could put $6 million towards converting Downtown East Station to a center island station, so that people transferring betwixt the Blue and Green Lines would not need to walk across the tracks.

The full council will vote on this $6 million pedestrian bridge on April 22.