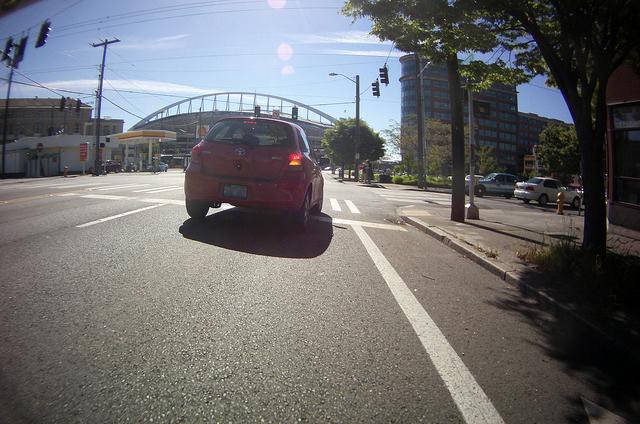 CC/Flickr/joshua_putnam
Right hooks, a car or truck cutting you off with a right hand turn, are a somewhat unique problem for cyclists.

I’ve been thinking a lot about “expertise” amongst bike riders in the last few years. The United States has had a persistently higher bicycle accident and fatality rate that many other nations for more than two decades now and I’m convinced that our rider profile has something to do with that.

Rider profile isn’t the only factor, poor cycling infrastructure, anti-cycling prejudice, territorialism (on the streets, trails, and sidewalks), equipment, and inexperience with a new mix of traffic (i.e. the number of cyclists on the roads has exploded in the U.S. over the last two decades), all contribute to the accident and fatality rate. Nevertheless I think rider profile plays a significant role.

What do I mean by: “rider profile?”  When I talk about profile I’m referring to a comparative level of rider experience and expertise. One can quickly acquire the physical skills of riding, but it takes years to acquire the expertise. Basically I think we have fewer expert riders in the U.S. than they do in a place like the Netherlands. I know a lot of U.S. cyclists will bristle at my suggestion but let me flesh it out a little.

Look at who’s riding bicycles in the United States today. Basically we have four generations, seniors, middle aged, 20s-30s, and children. None of our age groups contain a majority of lifetime riders. Amongst seniors we have a group that rode as children, on very different bicycles, in very different circumstances as children, and then didn’t ride again for decades. Many of our middle aged riders, people in my age group, rode bikes as kids and maybe teenagers, but then stopped riding bikes almost the very day we got our provisional driver’s license. Many riders in their 20s and 30s had bikes when they were kids, but they were just another toy in the garage that didn’t get much use because parents shuttled them around in the SUV’s all the time. Then we have the children of today, many of whom don’t ride unless they’re riding with their parents as a family activity of some kind… which means they don’t ride very much compared to say, my generation.

Compare the U.S. profile with that of cyclists in the Netherlands where almost everyone riding a bike no matter what age has been riding continuously since they were 4 or 5 years old. Very few cyclists in the Netherlands ride multi-gear or road (racing) bikes, and almost no one wears a helmet, yet they have much much lower accident and fatality rates per capita. One difference is that they’ve been riding continuously for years if not decades and presumably have acquired more actual riding skill. Americans have the gear, and they read the magazines, and ride in groups and clubs, but they lack years of acquired experience. So you’ll see U.S. cyclists all geared up in groups, flashing hand signals, drafting, and shouting out: “clear!” when they get some intersections in groups, but they’re all riding way too fast for the conditions, or entering blind intersections and curves side by side instead of in single file, etc. etc.

Part of the problem is that we don’t actually share experience in the U.S., we kind of have a weird way of talking about cycling safety. We have arguments about who’s responsible for accidents instead of talking about what riders can do to avoid accidents. Some Americans see cycling as a “movement” of some kind rather than a form of transport or enjoyable activity.

A good example is an article about “right hooks” recently published on the “Fair Warning” website, a website devoted to safety issues.  The “right hook” is the problem of cars and trucks turning “right” at intersections and cutting off cyclist who are riding in the same direction- on that right-hand side. These turns can take cyclists by surprise if the drivers don’t signal and it can lead to tragic results when cyclists get pulled under the wheels.

The article discusses the need for special equipment maybe laws requiring special guard rails on the sides of large trucks that can prevent people ending up underneath the vehicle — and that’s fine. However in typical American fashion there’s absolutely no discussion about what a cyclist can actually do to avoid right hook accidents. They talk about training truck drivers, but there’s no mention of training cyclists.

I’ve decided that given the gaps in experience amongst U.S. cyclists it might helpful to share some practical experience on occasion here on my blog, to wit: let’s talk about right hooks.

Unfortunately there is no “safe” place to ride next to a street that can eliminate the possibility of right hook accident; that’s one reason they’re so dangerous. It doesn’t matter if you’re in a dedicated bike lane, or bike trail, or even a sidewalk, if a vehicle makes that turn in front of you, you have a problem. The best way to reduce the possibility of a right hook accident is to approach every intersection with caution, survey the traffic as you approach the intersection. It doesn’t matter if you have a green light, or no stop sign, whatever; you need to look at the traffic.

Most vehicles cannot make a sharp right hand turn without slowing down, so that’s what you’re watching for, not a turn signal (drivers frequently neglect to use signal turns, or do so at the last second). Whenever you’re approaching an intersection next to a vehicle on your left-hand side you need watch that vehicle for signs of slowing down, in preparation to make a turn, and you need to slow down or be prepared to stop if they make the turn. In stop and go traffic it’s a little dicey because a vehicle may already be going slow enough to make the turn.  My advice, whenever entering an intersection next to a slow moving vehicle, slow down, almost to a stop of need be, until you’re absolutely sure that vehicle isn’t going make that right hand turn. Unfortunately you can’t just blow though intersections assuming that no one will do anything they’re not supposed to do. Sure, drivers are supposed to see you, they’re supposed to signal, they’re supposed to do a lot of things.  People don’t always do what they’re supposed to do, and it can get other people killed on occasion.