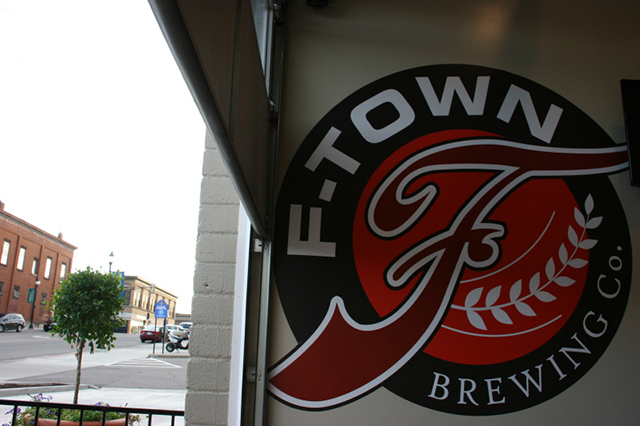 Photo by Audrey Kletscher Helbling
The taproom, right, opens to a street-side fenced patio. To the left, up the hill, lies Central Avenue, the main street through Faribault’s historic business district. F-Town encourages patrons to order carry-out at local restaurants and bring the food to the brewery to enjoy with beer.

ONE OF MINNESOTA’S newest craft breweries, F-Town Brewing Company, has opened in the heart of historic downtown Faribault, in a community with a rich beer history. The Fleckenstein family brewed Fleck’s beer and other beverages here for 108 years, until 1964. 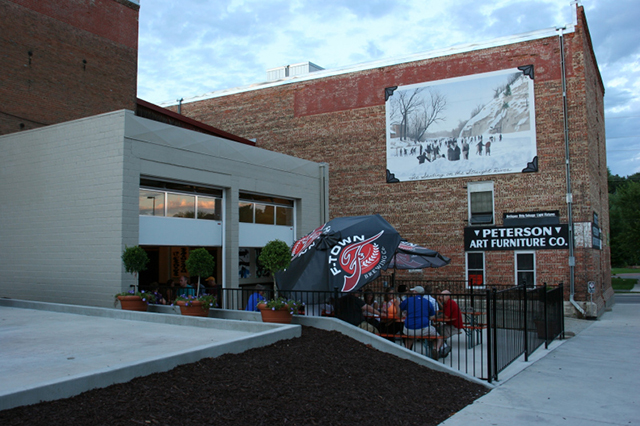 Photo by Audrey Kletscher Helbling
An overview of the Peterson Art Furniture building which houses architectural salvage and antiques, right, with the brewery on the left.

Now locals Noah Strouth, Chris Voegele and Travis Temke have brought beer back to Faribault, housing their operation in a section of the aged Peterson Art Furniture Co. complex with the taproom in an adjoining converted garage space. 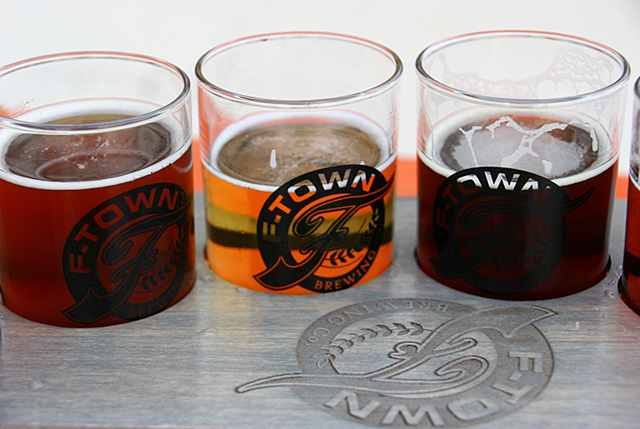 Photo by Audrey Kletscher Helbling
A snippet photo of the F-Town flight staged on the brewery’s signature orange picnic table.

F-Town has proven a popular gathering spot for craft beer lovers since opening about a month ago. Saturday evening my husband and I stopped by for the first time, purposely allowing the initial hoopla to settle. We ordered a $12 flight—a sampling of six beers ranging from the FlexLess light lager to the robust Nutso which tasted of coffee to me. 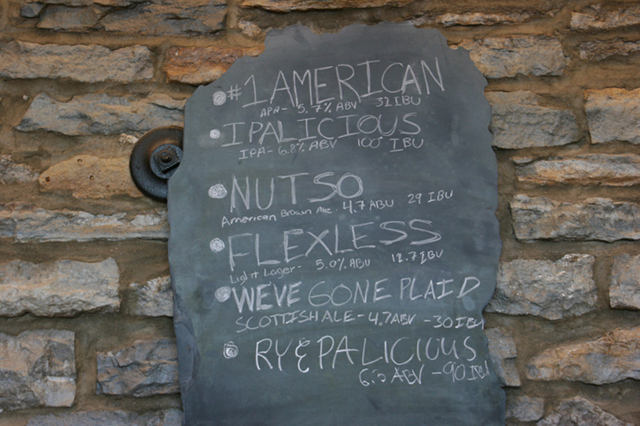 Photo by Audrey Kletscher Helbling
The beers included in our flight.

I was hard-pressed to choose a favorite. But Randy picked FlexLess without a second thought. He found it the most similar to mass-produced beers, which can be a good thing or not, depending on the type of beer you like. He prefers a less hoppy taste. I wondered about that name, FlexLess, and the similarity to the historic Fleck’s name. The founders of F-Town early on hoped to bottle Fleck’s branded beer at a brewery they initially named Patriot’s Brewing. That all changed following legal and trademark issues. 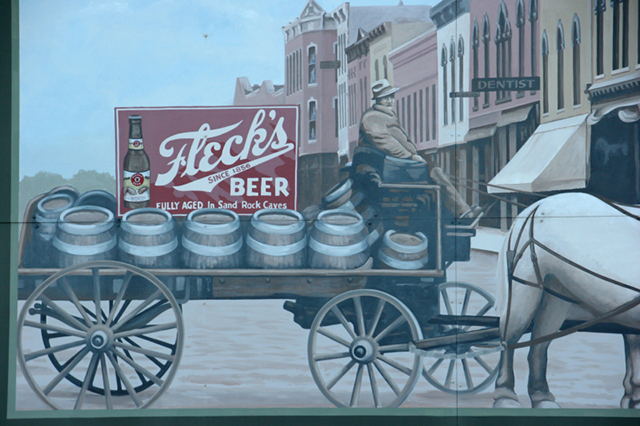 Photo by Audrey Kletscher Helbling
A block from F-Town, you’ll find a mural honoring Fleck’s beer, once brewed in Faribault.

Eventually, the brewery became F-Town with beers bearing monikers like #1 American (there’s that patriotism), Ipalicious (an IPA) and We’ve Gone Plaid (a Scottish ale). The beers (only Ipalicious and Nutso at this point) are sold in cans, not bottles, a disappointment since I think craft beer should be bottled. But my son-in-law noted that cans are becoming a more common choice for craft breweries, including at the wildly popular Surly Brewing Co. I have yet to purchase F-Town beer off-sale as the one time I tried, the liquor store was sold out. The beer is being distributed only locally, for now, by College City Beverage. 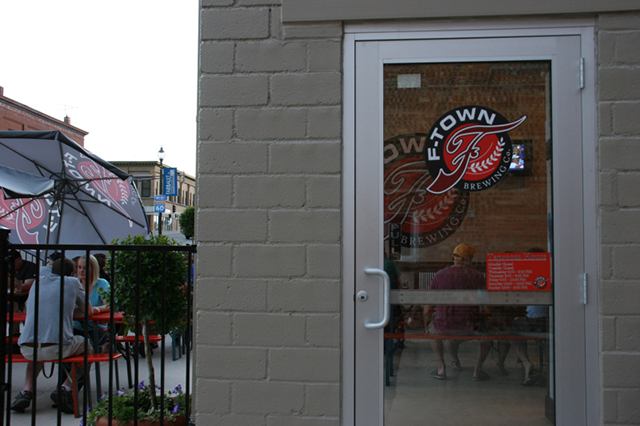 Photo by Audrey Kletscher Helbling
In this photo, you see the door into the taproom and then the patio.

About that brewery name. I’ve heard mixed reviews. Some dislike that the “f-word” pops into your head upon hearing F-Town. But, on the positive side, the name is short and memorable and connects to the town name, Faribault with an “F,”  and purposely or not to the long-ago Fleckenstein breweries, also with an “F,” at least in my mind. 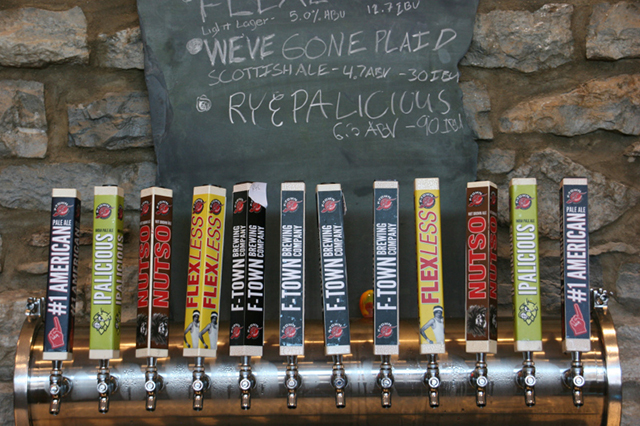 I’ll admit, though, I’m not impressed by the wild-faced creature graphics for the Ipalicious and Nutso beers, the two F-Town beers currently canned and retailed. I was expecting art and beer names reflective of our historic community, local heritage, geographic setting and/or even the historic former furniture building in which the brewery is housed. I’m sure much thought was put in to both. But I am not making the strong connection to Faribault with the choices. I hope that changes. 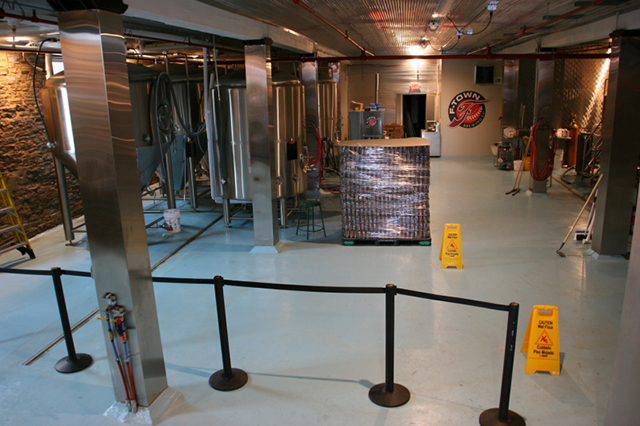 Photo by Audrey Kletscher Helbling
Here’s where the beer is made, just down the steps from the taproom.

Words matter. A guy drinking beer next to my husband and me at F-Town pegged us as “beer hippies,” folks who apparently wander about checking out craft breweries. We’re not hippie anything other than coming of age in the early 1970s. He assessed us as such after I asked if he’d been to Montgomery Brewing in neighboring Montgomery. He hasn’t. We haven’t. We’ve only ever visited August Schell Brewing Company in New Ulm. And now F-Town, new on the Minnesota craft brewery scene and right here in the heart of historic Faribault. 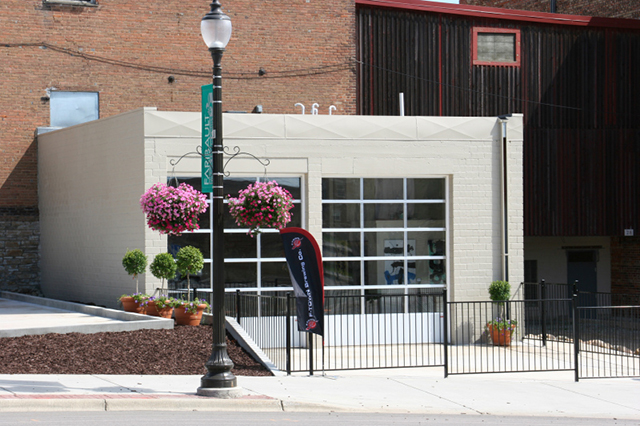 The brewery is located at 22 Fourth Street Northeast/Minnesota State Highway 60, just half a block off Central Avenue. 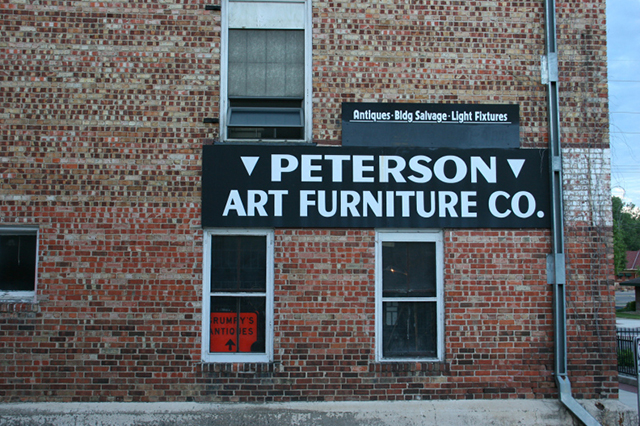 Photo by Audrey Kletscher Helbling
This is an eye level scene of the Peterson Art Furniture Company building from the F-Town patio. Therein you will find 25,000 square feet of antiques and collectibles, architectural salvage, lighting, furniture and more. Plan time to explore this multi-level complex. Faribault has a rich history of furniture makers. 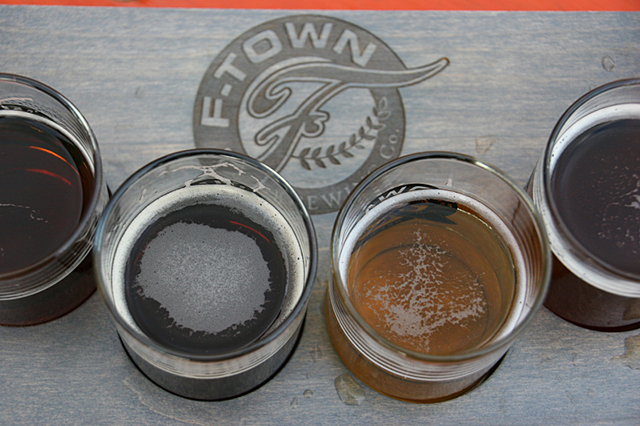 Photo by Audrey Kletscher Helbling
Another perspective of our flight. 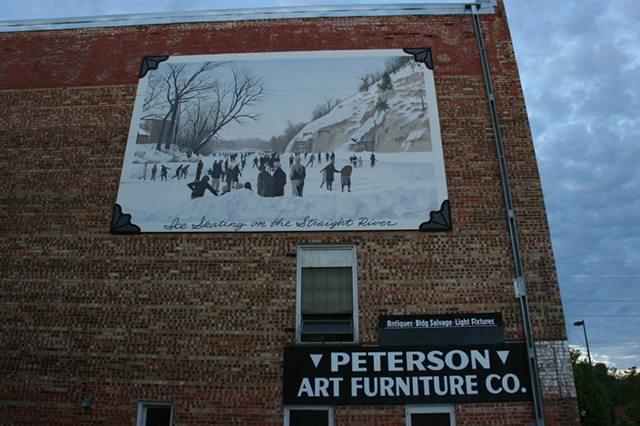 Photo by Audrey Kletscher Helbling
When you’re sipping on the patio, don’t miss this mural of iceskaters on the Straight River.

This post was written by Audrey Kletscher Helbling and originally published on Minnesota Prairie Roots.